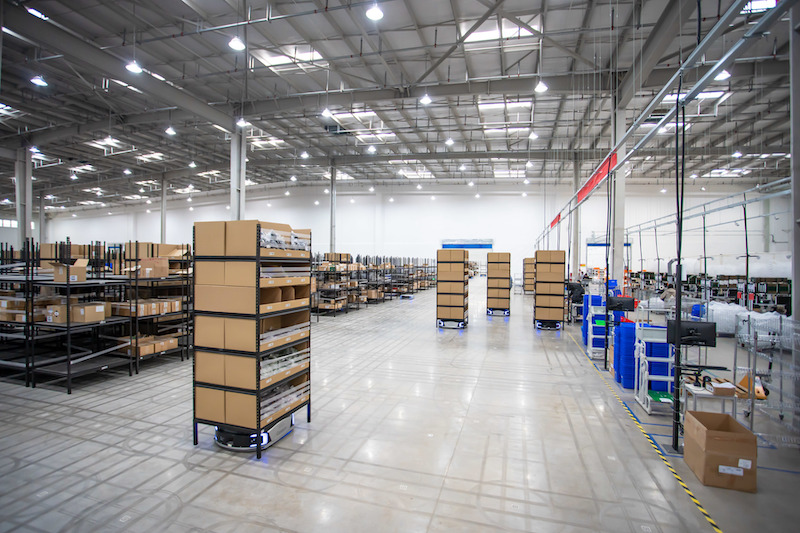 Geek+, a provider of autonomous mobile robots for warehouses, has been selected by myEnso, a German-based online grocery supplier, to upgrade the company’s distribution center for fast moving consumer goods with a goods-to-person robotics solution.

Having received governmental support and financing, the robotics-driven e-commerce platform will enable regional producers, startups, as well as well-known brands to connect and serve online shoppers all over Germany.

Jackson Zhang, vice president of Geek+ Europe, says: “We are excited to see myEnso join our growing European customer base and view the project as the beginning of an extensive cooperation that will enable them to streamline logistics operations and better serve their online customers. END_OF_DOCUMENT_TOKEN_TO_BE_REPLACED 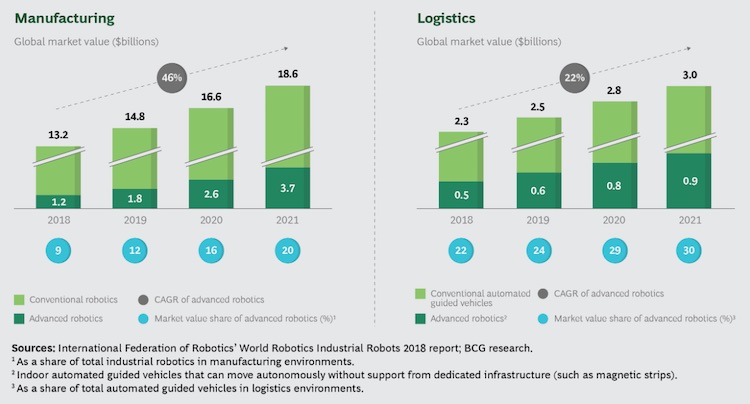 BCG found that executives from all industries see a gap between their ambitions for advanced robotics and the current level of implementation.

The research company interviewed more than 1,300 executives from manufacturing and many other industries for its report, The Factory of the Future.

It found that more than 70 percent believe that the new opportunities offered by advanced robotics will be “very relevant to their future production”.

Some 52 percent expect advanced robotics to become one of the most important “drivers of productivity improvement by 2025”.

Gap between demand and implementation

Additionally, the executives say that combining advanced robotics with other technologies, process enhancements, and structural layout changes can yield savings of up to 40 percent.

In each of the 12 countries in BCG’s study, most of the companies we surveyed plan to implement advanced robotics within the next three years.

Companies in emerging nations, especially China and India, tend to be “even more enthusiastic” than those in industrialized nations about using advanced robots, even though the savings achieved by replacing manual activities would not be as high.

These companies may be looking to automation as a way to compensate for a shortage of skilled labor and to improve quality, thereby enhancing their ability to compete in international markets, say the authors.

They add that “significant government funding and less concern about job losses help to fuel excitement about technology”.

The size of the company affects robotics adoption. Small businesses are less likely than large businesses to use advanced robotics applications.

Advanced robotics systems offer great opportunities for established producers of robots, producers of other advanced auto­mation solutions, and new entrants in the field.

But, according to BCG, robot producers must also deal with significant challenges, including the need for high research and development investments and the need to forecast sales accurately in an increasingly complex environment.

Indeed, some prominent producers of advanced robots have gone out of business as a result of disappointing sales, says BCG.

Because some promised breakthroughs have failed to materialize, many executives of companies that purchase robotics solutions are skeptical when robotics producers or market experts describe significant technological advances.

Survey participants say that they require not only mature and robust technologies, but also lower investment costs.

To meet users’ expectations, robot producers must focus on improving both software and hardware:

Software will be the primary differentiator for advanced robotics systems, says BCG.

Producers can use software as the basis for new business models, including the monetization of pushed upgrades, subscription-­based pricing, and performance-­based contracts.

However, they must ensure that their solutions can be integrated into their customers’ system architecture.

To reduce the need for complicated programming on the shop floor, it is essential to improve user interfaces. Conventional industrial robots’ interfaces fall short of meeting usability requirements.

Producers must further leverage or adapt sensors for industrial applications. Scale effects resulting from higher demand in the automotive and consumer industries will help to reduce costs in this area.

Although mechanical systems of industrial robots are already quite mature, improvements are needed in modularity, flexibility, dexterity, and mobility.

“Robot producers can leverage materials that possess enhanced characteristics to improve the capabilities of robots and broaden the areas of application,” says BCG.