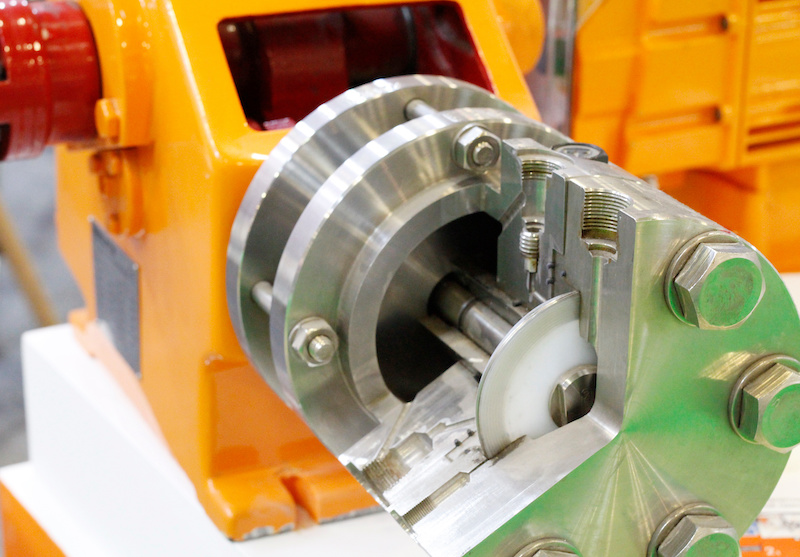 Companies that need to pump flammable fluids often refrain from using electric motors because these motors might cause a spark to fluids, like petroleum fuel, gas, or other combustible chemicals.

Instead of electric motors, diaphragm pumps use air to move the rod and valves. The basic principle of a diaphragm motor is that air pressure is used to move a rod back and forth by using two diaphragms.

This back-and-forth motion creates the torque power that pumps and moves the fluids or liquids.

The air pressure is often supplied by a hose coming from a compressor and fed to the mechanism that moves the diaphragms. The output air is released through an air exhaust.

Even though a diaphragm pump uses only air pressure and not electric motors, it can still be automated.

There are several ways to automate a diaphragm liquid pump, but the basic principle that applies is that the air pressure fed into the diaphragm mechanism can be regulated.

Since the air pressure can be regulated, you can adjust the back-and-forth motion of the diaphragms.

How Does A Diaphragm Liquid Pump Work?

An air-operated double diaphragm (AODD) is a positive displacement type of pump. It doesn’t have to use electricity or electric motors to generate the torque and force needed to pump liquids or fluids from one point to another.

Instead of gears powered by the torque generated by an electric motor, diaphragm pumps move the diaphragm rod through a simple air-valve system.

There are two round discs in the design of a diaphragm liquid pump. These discs are made of elastomeric material, which is why the discs are also sometimes referred to as flexible diaphragms. The two elastomeric diaphragms are each attached to one tip of the diaphragm rod.

Whenever the motion of the diaphragm rod nears the end of its throw, the pilot spool, which is the middle of the three horizontal rods, is thrust backwards and forwards.

Where Is A Diaphragm Pump Usually Used?

Transferring materials – It’s used to transfer fluids from one storage container to another. Some examples of fluids and liquids that it transfers are chemicals and paints.

In short, diaphragm pumps are versatile, as they can be used for various applications.

A diaphragm liquid pump is a useful device to carry flammable fluids that pose a risk to public health and safety. Though it doesn’t rely on electric motors, its applications, as well as some aspects of its input and output processes can be automated.