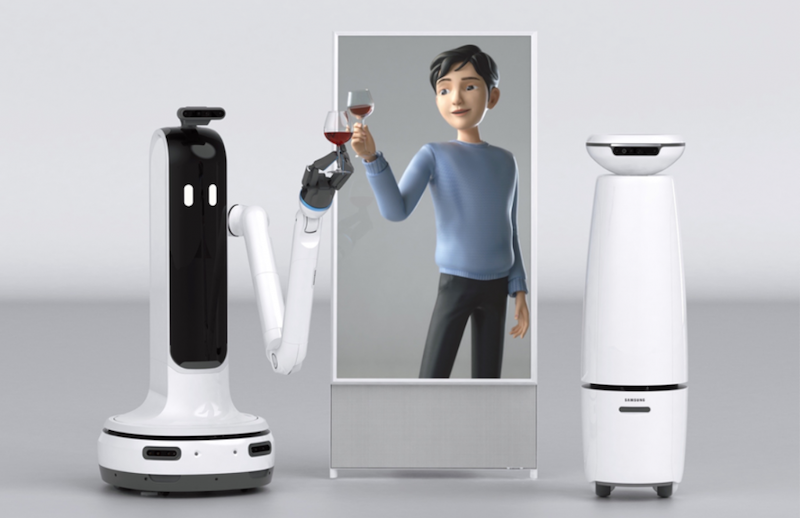 Samsung, arguably the world’s largest mobile phone company and generally an all-round hi-tech behemoth, appears to be preparing to launch a massive invasion of America with robots.

The South Korean company has been reported to have filed papers and applications or whatever it is that you do at the World Intellectual Property Organization to trademark or patent a new brand called “Samsung Bot”, according to the Korea Herald.

Checking on Samsung’s own website, Robotics and Automation News learns that the company seems to be targeting its robots at the home market and the retail sector.

Junghoe Kim, of Samsung Research’s Robot Center, says the overall concept of the company’s presentation at CES this year was “Digital, Meet Physical”, highlighting a new artificial intelligence avatar, the concept of which will be familiar to most science-fiction fans.

He adds that the company introduced two types of “companion robots”, which could probably also be described as “service robots”:

Kim says that the robots “can help users by arranging a video conference for an urgent meeting, or by setting the table for a meal”.

Other robotic technologies showcased at last year’s CES show include:

Planned for launch in the US in the first half of 2021, this new vacuum cleaner uses object recognition technology to identify and classify objects to decide the best cleaning path.

LiDAR and 3D sensors allow JetBot 90 AI+ to avoid cables and small objects, while still cleaning hard-to-reach corners in your home. Also outfitted with a camera, JetBot 90 AI+ is integrated with the SmartThings app to assist you with home monitoring.

The latest development in Samsung’s growing robotics lineup, Samsung Bot Care is designed use AI to recognize and respond to your behavior.

It will be able to act as both a robotic assistant and companion, helping to take care of the details in your life. It will also learn your schedule and habits and send you reminders to help guide you throughout your busy day.

Also in development, Samsung Bot Handy will rely on advanced AI to recognize and pick up objects of varying sizes, shapes and weights, becoming an extension of you and helping you with work around the house.

Samsung Bot Handy will be able to tell the difference between the material composition of various objects, utilizing the appropriate amount of force to grab and move around household items and objects, working as your trusted partner to help with house chores like cleaning up messy rooms or sorting out the dishes after a meal.

The company adds: “Looking to the future, Samsung is also developing other tangible applications of AI technologies for daily life. Samsung is continuing to build on its Samsung Bot Retail, which would guide users outside the home in retail environments, and GEMS, Samsung’s health-focused exoskeleton as mobility aide.

“These innovations allow robots and robotic devices to co-exist with humans, enhancing their lives and catering to a variety of lifestyles and different environments.”

Samsung also showcased many other innovations at CES, notably its new “Lifestyle TV”, a four-door fridge, and a “smart trainer” that tracks and analyses things about the wearer like their posture, exercise performance and so on.

Commenting on the plans to invade America with robots and other assorted technologies, such as artificial intelligence, Sebastian Seung, president and head of Samsung Research, says: “Our world looks different, and many of you have been faced with a new reality – one where, among other things, your home has taken on a greater significance.

“Our innovations are designed to provide more personal and more intuitive experiences that express your personality. We’re hard at work to bring you next-generation innovation, with AI as the core enabler, for your better tomorrow.”