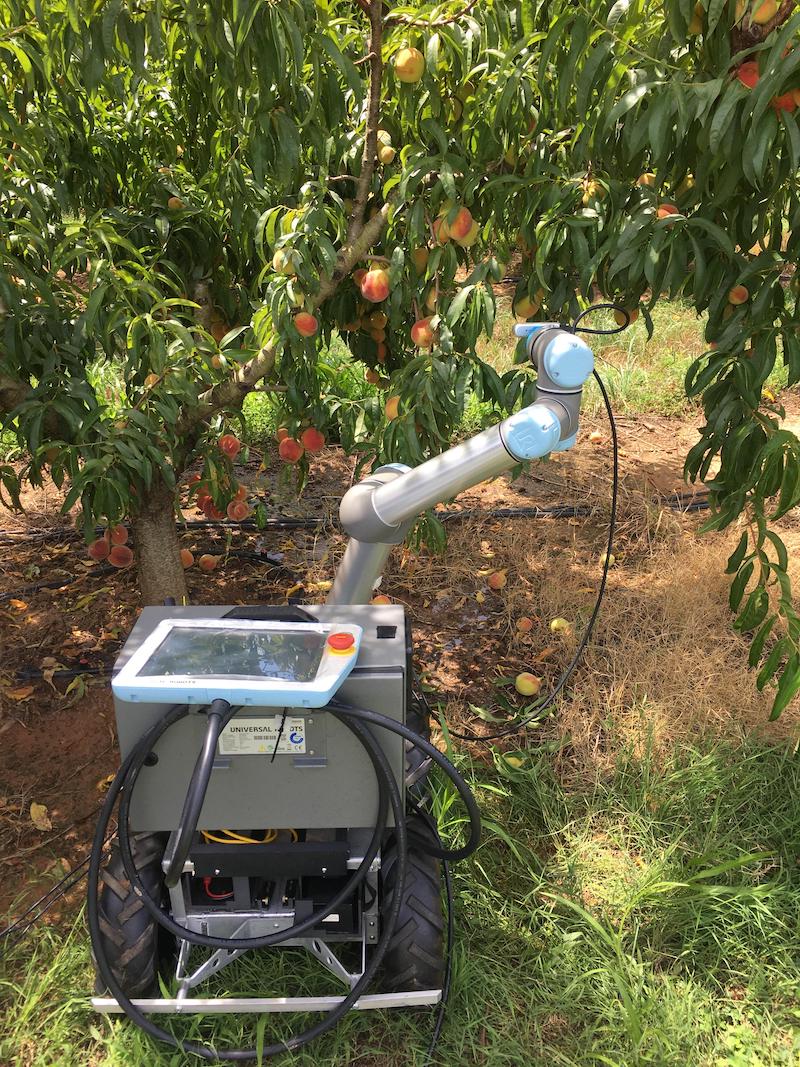 Peaches, not surprisingly, pack a punch for Georgia’s economy.

Over 130 million pounds of peaches are produced in Georgia per year, and the Southern staple has a total farm gate value of over $71 million, according to recent estimates.

But cultivating peaches is a complex and manually-intensive process that has put a strain on many farms stretched for time and workers. To solve this problem, the Georgia Tech Research Institute (GTRI) has developed an intelligent robot designed to handle the human-based tasks of thinning and pruning peach trees, which could result in significant cost savings for peach farms in Georgia.

Ai-Ping Hu, a GTRI senior research engineer who is leading the robot design project, says: “Most folks are familiar with the harvesting of fruit and picking it up at the market. But there’s actually a lot more that gets done before that point in the cultivation cycle.”

The robot uses a LIDAR sensing system and highly-specialized GPS technology to self-navigate through peach orchards and steer clear of obstacles. The LIDAR system determines distances by targeting an object with a laser and measuring the amount of time it takes for the laser beam to reflect back, while the GPS technology measures locations as specific as a fraction of an inch. 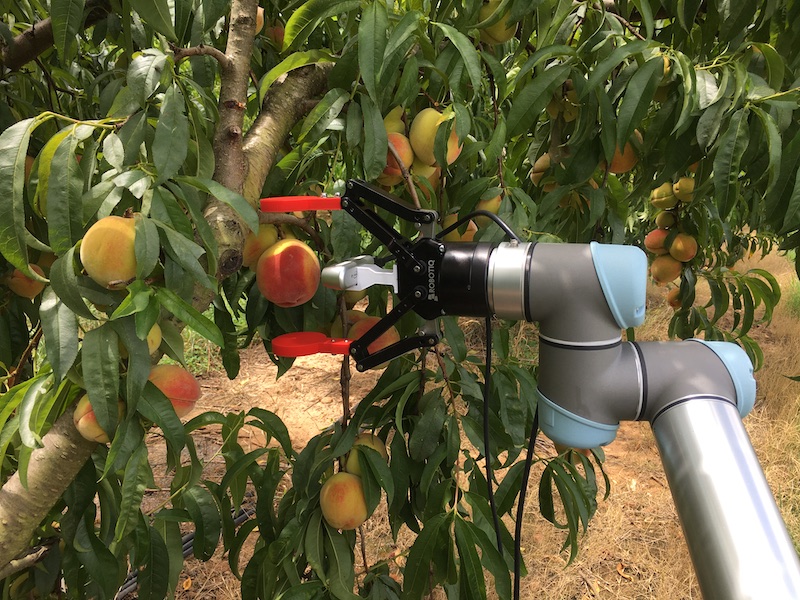 Once at a peach tree, the robot uses an embedded 3D camera to determine which peaches need to be removed and grabs the peaches using a claw-like device, known as an end effector, that is connected to the end of its arm.

Pruning refers to the selective removal of branches prior to the spring growing season, which typically occurs from mid-May to early August, and serves many purposes – including exposing more interior surface areas of the fruit trees to sunlight and removing undesired older growth to enable new growth to better thrive.

Thinning, meanwhile, is when small or undeveloped peaches, known as peachlets, are removed from peach trees to allow for bigger and better peaches to grow, Hu explained.

Hu says: “If you just let all the peaches grow to maturity, then what you’ll end up getting is a tree of really small peaches. What you want to do is have relatively few peaches, but you want the ones that remain to be nice and big and sweet – ones you can actually sell.”

There are no robots on the market that have been able to fully replace humans in the peach cultivation industry due to peach orchards’ unstructured environments, which includes unpredictable weather, uneven terrain, and trees’ different shapes and sizes, Hu noted.

Hu says: “In an orchard, no two trees are ever the same. You could have a sunny day or a really cloudy day – that’s going to affect the way the technology on the robot can operate.

“There’s no robot in the world right now that can harvest or thin peaches as well as people can. The technology’s not quite there yet.”

Current efforts to automate the harvesting of peaches and other specialty crops so far have not been as successful as advancements in commodity crop automation, where machines can collect hundreds of acres of the good at a time. Commodity crops include items such as corn, wheat, and soybeans.

He says: “Specialty crops are still very reliant on manual labor. That’s really different from something like wheat, where one person driving a combine can harvest thousands of acres, hundreds of acres. Whereas for peach harvesting, because everything is so individualized and so unique, it’s really been difficult to automate.”

GTRI has also partnered with Dario Chavez, an associate professor in the Department of Horticulture at the University of Georgia Griffin Campus in Griffin, Georgia, to further explore the intelligent automation of peach farming.

Gary McMurray, a GTRI principal research engineer and division chief of GTRI’s Intelligent Sustainable Technologies Division, said the novel robot stands to transform the fruit cultivation process for many farms that have struggled to grow trees that are strong enough to withstand unpredictable environmental conditions.

McMurray says: “This is something that directly affects the yield of the tree. It’s money in the pocket of the growers.”

Main image: The robot utilizes a combination of LIDAR remote sensing and GPS technology to self-navigate through a peach orchard. Once the robot arrives at a peach tree, it uses an embedded 3D camera to determine which peaches need to be pruned or thinned. (Credit: Ai-Ping Hu, Georgia Tech Research Institute)