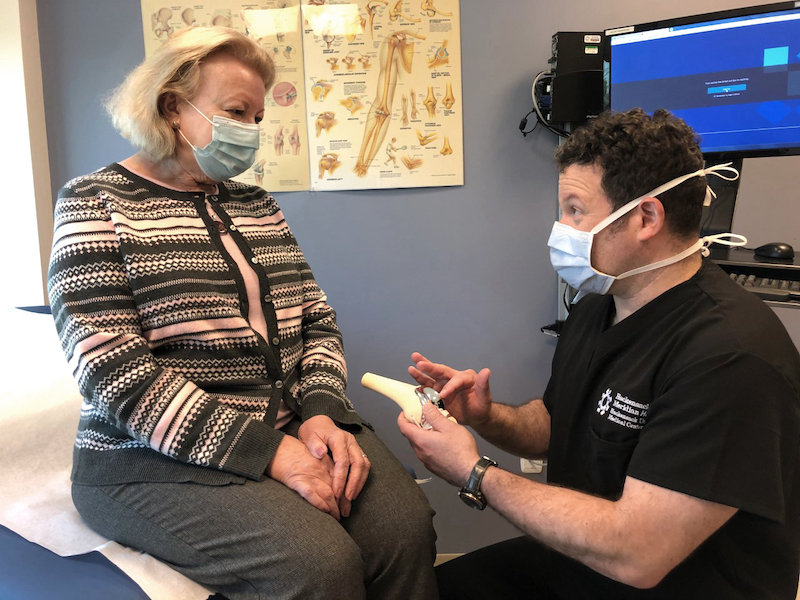 Think Surgical, an innovator in the field of orthopedic active robot surgery, commemorates National Arthritis Awareness Month, which is recognized throughout the month of May.

According to the Centers for Disease Control and Prevention (CDC), arthritis is one of the most widespread health conditions in the United States, affecting about one in four adults or more than 54 million men and women.

People like Eugenia Dziopa, who has always been an avid walker, enjoying daily strolls around her neighborhood in northern New Jersey. Two years ago, she began experiencing pain in her left knee from degenerative arthritis.

“I noticed that I could not walk far anymore,” said Eugenia, who was 64 at the time. “I always loved to take walks, and it got to the point that I could not do that anymore. If I would go even half a block, or even from the parking lot at work, I would be in pain. That was my breaking point, and I knew I needed to see an orthopedic specialist.”

Eugenia made an appointment with Yair D. Kissin, MD, the vice chair of Orthopedic Surgery at Hackensack University Medical Center (HUMC), a national leader in orthopedic care and robotic surgery, the same hospital where Eugenia currently works as a biorepository technologist.

“The rule is when a person starts to see a decline in their function and the ability to do things that make them happy on a day-to-day basis, they should seek help,” said Dr Kissin.

“There are non-operative means that we almost always try first. Initially, we did conservative treatments for Eugenia, including physical therapy followed by injections. In Eugenia’s case, those did not work.”

“I didn’t know my knee joint was bone on bone and thought I would get physical therapy and it would get better,” recalls Eugenia. “It helped a bit, then I tried steroid injections. I had two of them and they gave me only temporary relief that lasted one day each time.”

In January of 2020, Dr Kissin discussed surgical options with Eugenia, including new technology available at HUMC for total knee replacement procedures for patients who have bone-on-bone, or severe degenerative arthritis. The technology is called the TSolution One Total Knee Application by Think Surgical.

Dr Kissin was one of five primary surgeons in the United States who participated in the Investigational Device Exemption (IDE) study, which provided the safety and efficacy data required for a 510(k) submission for the TSolution One Total Knee Application to the US Food and Drug Administration (FDA).

The study included 115 patients, with 25 from Hackensack University Medical Center.

“The timing of it was impeccable,” recalls Dr Kissin. “About a week after Hackensack acquired the TSolution One Total Knee Application, I was looking for a good candidate. Because Eugenia had been a patient of mine for a while, I had a good relationship with her.

“Also, at the time she worked at the Hackensack Meridian Health Center for Innovation and Discovery. I thought Eugenia is the right person to talk to about this technological advancement.”

The active robot aids the surgeon in executing the preoperative surgical plan with automated, hands-free cutting and removal of the diseased bone and cartilage. The TSolution One Total Knee Application assists surgeons with optimal joint implant placement based on each patient’s unique anatomy.

“I told Dr. Kissin I’d get back to him, since this was something new to me,” said Eugenia. “I spoke with colleagues and family members about it for their opinions and I did some research and concluded that the robot would provide precision bone cutting. So, I opted for surgery with the Think robot.”

In February of 2020, Eugenia became the first patient in the country to have a total knee replacement with the TSolution One Total Knee Application after it became commercially available.

“There were no issues whatsoever and everything went really well,” recalls Dr Kissin. “Eugenia was in the hospital two nights.

“By two weeks she came back for a post-op visit, doing PT and she was already at 90-degree motion. When she saw me at three months, she was at 120 degrees of motion which is normal, and not taking any pain meds or using a cane.”

Dr Kissin has performed nearly 60 TKA joint replacement procedures with Think’s TSolution One Total Knee Application, which is the only commercially available active robot system for total knee replacement that supports an open implant library, giving surgeons a choice of implant options based upon each patient’s individual needs.

“Participating in the IDE study for Think changed how I look at knee replacement,” said Dr Kissin. “I have used other robotic-assisted devices, as well as manual instrumentation.

“I am very impressed with the accuracy and precision of the TSolution One Total Knee Application, and I use the system in many of my procedures today. This is the future of orthopedic surgery and knee replacement. HUMC is ahead in doing it now.”

In August of 2020, just six months after her total knee replacement, Eugenia said she was feeling like her old self before she had knee pain.

“I am very happy I decided to have a total knee replacement and am thankful I had the option of robotic surgery,” said Eugenia. “Otherwise, I would just be sitting. I was in so much pain. There was truly no alternative. The addition of the robot gave me confidence that the procedure would be precise and accurate.”

In February of 2021, Eugenia celebrated her one-year post-surgery milestone.

“I can walk more than a mile around my neighborhood with no problems and the road is not flat,” said Eugenia. “I do a lot of walking while at work at the hospital and I have no issues. I also take the stairs at work now instead of the elevator for additional exercise. I can do everything I did before I had knee issues.

“Also, my leg is nice and straight now. It had been curved because of the bone on bone. Today, I’m doing very well.”

Eugenia says she is thankful that she made the decision to have the surgery because it has allowed her to enjoy family time again.

“I have my normal life back. I have grandchildren and I can take walks with them. My life is so much better now than before knee replacement surgery.”

Dr. Kissin could not be more pleased with Eugenia’s outcome, and how she was the first patient in the nation to have a total knee replacement with the TSolution One Total Knee Application after FDA clearance.

“In 10 years, as everyone gets a robotic knee replacement, Eugenia will likely be thinking that she was one of the first,” added Dr Kissin.

Main image: Yair Kissin, MD, vice chair of Orthopedic Surgery at Hackensack University Medical Center in Hackensack, NJ (right) consults with his patient, Eugenia Dziopa. Eugenia was the first patient in the United States to have a total knee replacement with the TSolution One Total Knee Application after the active robot system received FDA clearance.