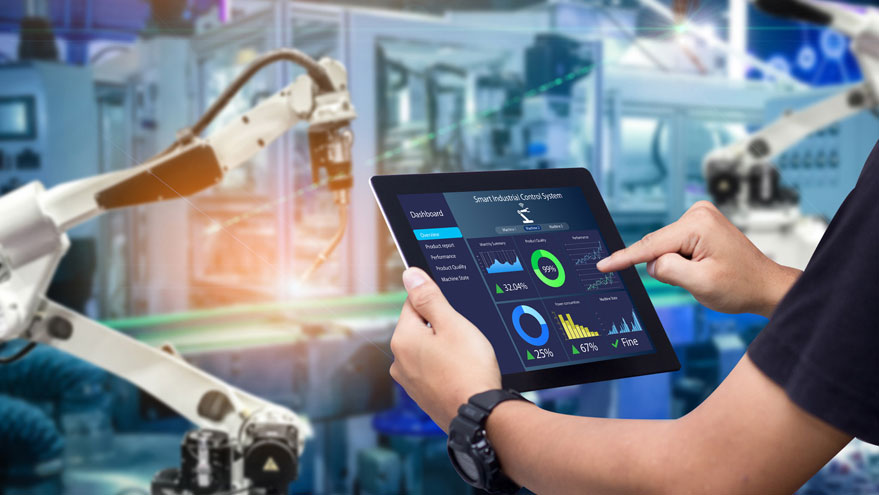 One-third of manufacturers are planning to move the software they currently use on-site to the cloud, according to research company IoT Analytics.

IoT Analytics, a provider of market insights and competitive intelligence for the internet of things (IoT) and Industry 4.0, surveyed the industrial IoT market and found that almost one-third of manufactures are planning to move their manufacturing execution software to the cloud, significantly boosting the global Cloud MES market growth for the coming years.

Knud Lasse Lueth, CEO at IoT Analytics, says: “Companies are struggling to make use of their data in a meaningful way and use it to create value. Today, a significant portion of this data is ‘dark’ (that is, it is not used for any analysis).

“A major reason why data remains ‘dark’ is because existing tools are not designed to handle the volume and variety of data generated. Cloud technology helps to ‘light up’ this dark data in a powerful way.”

The advantages of the cloud 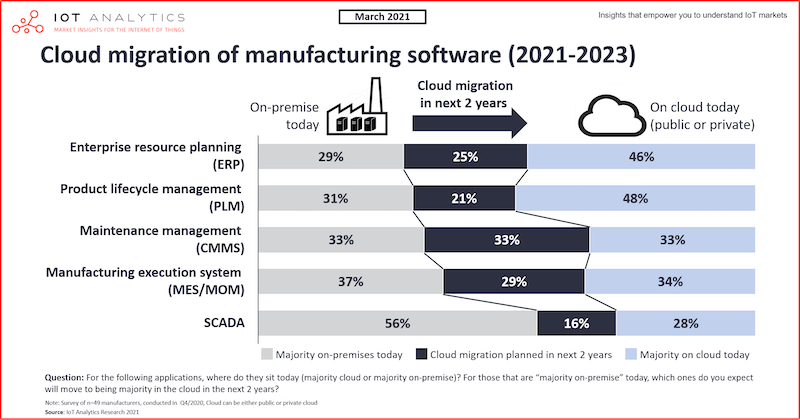 When compared to existing technologies, the cloud is proving to be more efficient and superior by providing a scalable infrastructure where data can be securely collected and accessed from anywhere and on any device.

Migration to the cloud has already proven to be a gamechanger in day-to-day usage for several enterprise software categories. Microsoft 365 has become the de-facto cloud-based standard for enterprise productivity software.

The 2020 success story of the Zoom video conferencing tool can be largely attributed to its cloud native framework that allowed the company to quickly scale and manage new customers during the pandemic.

A Q4/2020 survey of 49 manufacturers conducted by IoT Analytics showed that the move of manufacturing software to the cloud is broadening and accelerating.

While nearly 50 percent of today’s PLM and ERP systems and roughly one third of MES/MOM and CMMS solutions are already partially deployed in either a private or public cloud environment, many companies are planning to move more such workloads to the cloud in the next two years.

29 percent of respondents, for example, plan to move their manufacturing execution system, or a large part thereof, to the cloud in the next two years.

As can be seen by this data set, migration to the cloud in the manufacturing industry is following a top-down approach along the ISA 95 automation pyramid. ERP and PLM systems were the first software to migrate to the cloud (for example, Oracle’s Netsuite ERP and Cloud PLM), and now MES/MOM systems and CMMS are increasingly moving to the cloud as well (for example, Plex Systems, Fiix).

IoT Analytics says its research shows there are two very different ways in which these software suites are migrating to the cloud:

As can be seen in the data set above, there is a clear trend towards cloud MES.

IoT Analytics’ latest report on the topic estimates the cloud penetration of Manufacturing Execution Systems to increase, with cloud MES forecasted to become a $2.34 billion market in 2026.

End users are increasingly adopting cloud MES as it allows them to take advantage of the latest IoT technologies and offers better scalability than on-premise MES systems. Additionally, increased focus and investment on digitization efforts accelerated by the Covid-19 pandemic in developed economies will increase MES migration to the cloud.

The preferred method of migrating MES to the cloud depends on multiple factors such as capital investment, operational expenses, scalability, and data ownership.

Software-as-a-Service architectures are expected to grow considerably faster than Lift and Shift architectures due to the easy initial setup and integration with existing cloud-based software infrastructure.

SaaS deployments are preferred by small and medium corporations looking to digitize their operations with limited upfront investment since SaaS solutions require little to no existing IT infrastructure.

1. The convergence of software tools

The capabilities of key manufacturing software tools are overlapping more and more. This is particularly apparent for the interfaces of ERP systems and MES systems as well as IoT Platforms and MES systems, especially when hosted in the cloud.

A former executive at Manufacturing Enterprise Solutions Association, says: “Historically, our members have not talked much about the cloud; ‘Ain’t never going to happen’ was the general attitude.

“Then in approximately 2017, all of a sudden, it was there. Everyone was secretly using the cloud in some capacity. Technically – from both a security and reliability perspective – it performs much better than what they had sitting in their office.”

Make no mistake; there are many end-users in a variety of industries that indicate that they will never move a significant portion of their manufacturing software to the cloud due to security, privacy, reliability, and/or latency concerns.

But in the coming years, a large portion of manufacturers will move manufacturing software applications to the cloud because the benefits outweigh the costs/risks in many settings.

IoT Analytics’ data shows that business and shopfloor software that are non-critical and non-real-time will lead the migration. Shopfloor-level control logic operations will take longer to move to the cloud due to gaps in realizing ultra-low latency communication with high reliability.

However, new developments in 5G and wireless communication will likely address these concerns and open the door to even more manufacturing workloads, eventually migrating to the cloud in the coming decade.

In combination with relatively new technologies like artificial intelligence and digital twins, the cloud is set to become an indispensable tool for improving manufacturing operations.