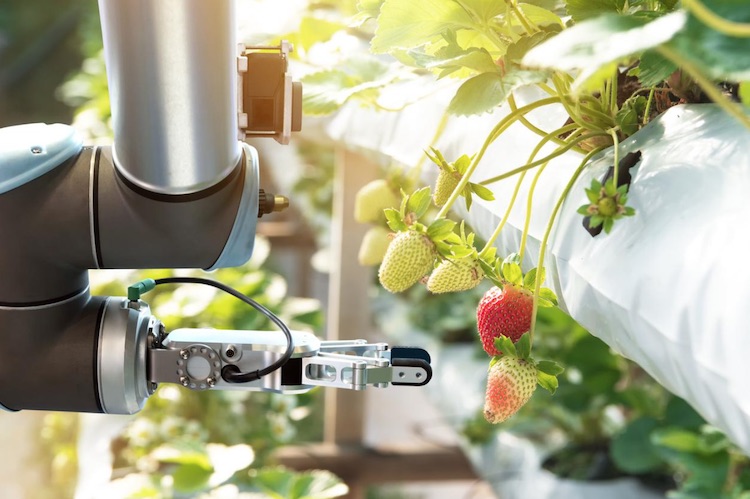 A fully functional food industry remains a vital part of any modern economy. Not only does it sustain countless jobs, it also keeps us sustained with food to put on our plates. If the cogs stop turning, we stop eating. It’s that simple!

The food industry has faced its fair share of challenges in recent years. Wage issues and labour shortages have dominated the headlines, often leaving this labour-intensive industry with more product than it can pack. Food is being wasted, and so is time and money.

When you think of modern advances in technology, electric cars and drones and connected devices are likely the first things to come to mind.

Yet without fail, the food industry is fast catching up as it transitions to a connected, automated future to pick, pack, and produce food.

So today we’re taking a look back at the year that was and exploring some of the latest advances within the food industry that are automating manual processes, increasing efficiency, and creating safer working environments in the process.

Back in November an article released by CIO Review highlighted a revolutionary step forward for the food industry. In it, the site detailed the exciting ways robots with advanced sensory systems are being used to boost productivity as well as enhance quality and stability.

This revolutionary step has seen robots taking on a new role in detecting odours, identifying contaminants and pathogens, as well as sampling food all with the power of human-style taste buds and e-noses.

These advanced, sensory robots have been designed for a number of uses. They’re as versatile as they are advanced! This includes the grading of products, evaluating ingredients, as well as identifying foreign contaminants. Just to name a few.

With this technology at its disposal, the food industry is able to reduce human error and improve efficiency all while maintaining an exceptionally high level of quality that’s integral to the future success of the industry in 2020 and beyond.

Back in April, Fusion Tech unveiled its latest advancements in food processing, aimed at increasing the efficiency and safety of both workers and product alike. It’s a boon for business. “In order to do what our machine can do in an hour, they would have to hire five or six people to even get close to what the machine could do,” says Jason, the marketing director for Fusion Tech.

The new machine features a safety cover, which when lifted, cuts power to the machine operated knife blades to prevent worker injury. With safety being an ongoing concern around meat processing, the transition to automated systems is set to be a positive one.

Unstructured bin picking of sensitive objects has always been a challenge for the robotics industry. Until recently, that is. 2019 saw the launch of the new FDA approved soft robotic gripper (“mGrip”) from Soft Robotics.

The mGrip series delivers delicate handling of products that previously couldn’t be used with automated systems due to their size, shape, volatility, or strict regulatory requirements. The new system from Soft Robotics resolves these issues through delicate handling that can accurately locate and pick a product from a bin without damaging or bruising it.

What’s more, the robot requires no feedback or force sensing systems. Instead, 3D Area Sensing is used to locate and grab the product no matter its orientation, and then place this into its packaging. Whether it’s bread, supplements, or product. It’s that simple.

In fact, this process costs businesses such as bakeries up to 1 percent of turnover!

2019 saw the OAL Group provide a handy solution for this conundrum with its release of robotic ingredient handling systems that accurately – and automatically – weigh food ingredients, similar to a scale.

The technology works by decanting elements into containers stored within a central cell; from there, the robot manages the inventory and weighs out the ingredients for each recipe before presenting the items at the designated retrieval station.

Ingredient handling systems such as this are promising to boost productivity, improve traceability, and ensure accurate weighing first time, ever time.

We’ve discussed the latest innovations for business to business food testing, picking and packaging, so what about straight from the robot to the consumer?

Blendid hit automation on the head in 2019 when the company introduced its second fully autonomous smoothie vending machine operated by robots. The Robotic kiosk makes custom-blended smoothies to order, with the ability to make nine smoothies simultaneously and pump out 45 drinks per hour.

Orders are placed by a mobile app or via tablets at the kiosk and made in under two minutes.

This is one of those things you have to see to believe.

A combination of artificial intelligence, machine learning, and robotics allows the autonomous robot kiosks to deliver on-demand, consistent tasting smoothies to customers. The only human interaction required is in the managing of inventory.

Machine learning allows Blended robots to track ingredients for each smoothie, and even adjust the recipe accordingly to the preference of the customer for next time based on their feedback.

The robots cost around $70,000, and are targeted towards cafeterias, stadiums and supermarkets. The developers of Blended, 6d bytes, have said: “smoothies are just the start”.

Bring on the technological advancements of 2020

Looking back, 2019 was a year of exciting, positive advancements within the food industry. From robots learning to taste and smell through to those that can serve smoothies, pack produce, and weigh ingredients, there’s a sense that this is only the tip of the iceberg for what is undoubtedly going to be an interesting year to come.