When it comes to the workplace, developments in automation mean that the future landscape of work is changing and, in turn, the roles that we undertake.

While many people fear that this contributes to a decrease in employment, many industries continue to grow and adapt despite automation.

In some instances this can improve work-life balance, allowing manual workers to work normal shifts and robots to work overnight or to remove the menial tasks from your role and retrain to complete tasks that cannot be automated.

With this in mind, Distrelec has analysed the European countries where workplaces will be affected the most by increasing automation, alongside the job roles where automation will impact continued growth by 2030.

The European countries most impacted by job automation by 2030 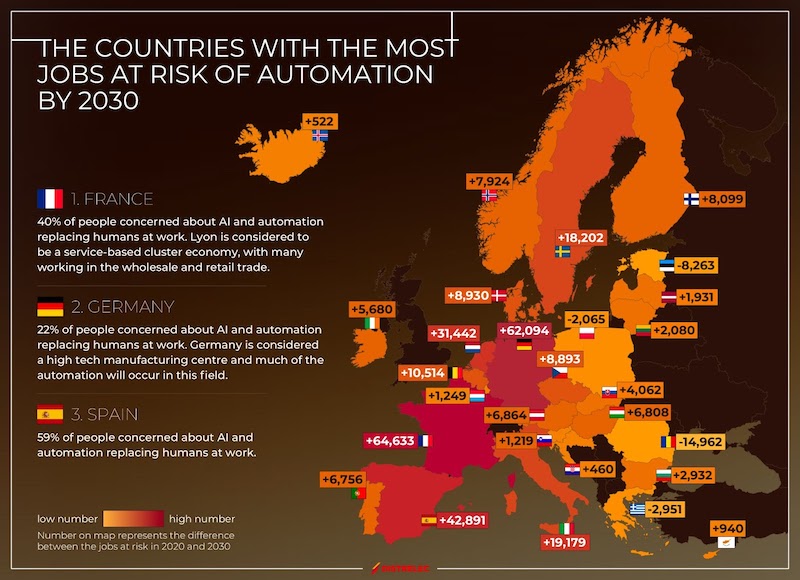 Research from France shows that when analysing employment data from over 55,000 manufacturing firms, productivity was shown to have increased per individual in the firms adopting automation.

However, there was also a reduction in the workforce.

But, due to the improved productivity and relative cost reductions, overall employment at these companies actually increased.

The study found that those companies that did not adopt automation saw a reduction in employment that was directly driven by increased relative costs and productivity, and a reduction in the market share.

Job roles expected to be impacted most by automation in 2030

In the face of automation, several industries are projected to grow, with the number of legal and social associate professionals predicted to grow 32 percent, customer clerks to grow 20.10 percent, and business managers to grow 18 percent.

Office Professionals came in first place for the biggest increase in roles impacted by automation. Based on 2020 figures, though just 7 percent of employees within the sector are expected to be impacted by automation, the industry is projected to grow by 14.1 percent by 2030. This will contribute to an additional 79,065 roles affected.

In second place are researchers and engineers, 8 percent of employees were affected by automation in 2020 and the industry is set to grow by 14.8 percent. This means that there will be an increase of 77,065 roles automation could have an impact on by 2030.

​​On the lower end of the spectrum but still falling within the top 5, roles like construction work are predicted to increase by 6.3 percent despite having had a 16 percent employee share of roles at risk of automation in 2020, resulting in 74,418 roles expected to be impacted within the next seven years.