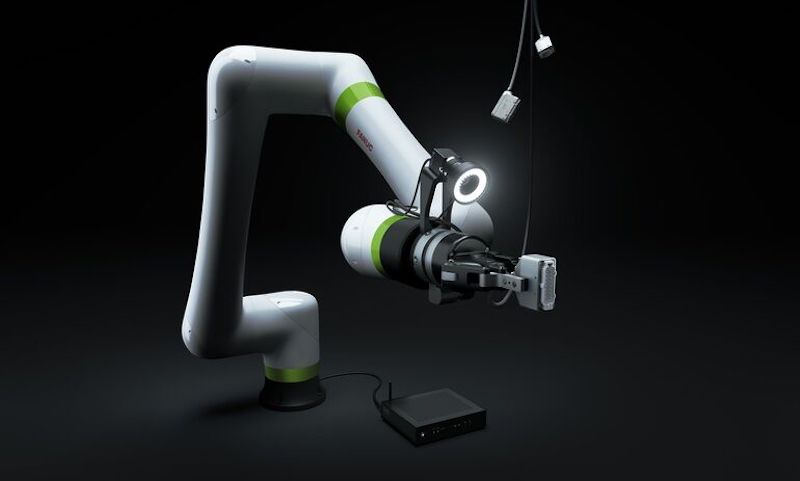 Using AI, the MirAI controller generates robot movements directly and in real-time. Robot skills are trained, not programmed, in a few days through human demonstration, without requiring knowledge of programming or AI.

To train a robot, a human repeatedly demonstrates a task by manually guiding the robot by the robot’s wrist. The recorded movements are then transformed into a skill.

“For the last 20 years I’ve heard companies ask for this kind of dynamic path augmentation technology repeatedly, so seeing it work is really amazing. What’s even more amazing is how affordable it is to add this kind of automation-enabling technology to any of our robots or collaborative cobots.

“I’ve already showed this technology to large and small manufacturers that are asking us to implement flexible robot automation faster, and unanimously, they are very interested in implementing MirAI.”

Cable plugging applications such as flat ribbon cables for the electronics industry or industrial automotive connectors typically require a high degree of flexibility to accommodate shape instability, making it a difficult task for any robot.

Bösl says: “Grabbing a flexible part, guiding it and placing it accurately into a socket may be a trivial task for humans, but it has been basically impossible to complete for industrial robots.

“That’s because while robots can work tirelessly and precisely with high repeatability, they are limited in their ability to perform complex motorized processes. The required hand-eye coordination is just not present in a robot.

“If the robot falters due to variances or deviations, employees must intervene, and are sometimes burdened with unergonomic tasks. This inhibits the performance of manufacturing companies who are already struggling with the prevailing shortage of skilled workers.”

Cable plugging, which can now be automated quickly and intelligently is just one example of MirAI’s further automation potential.

Micropsi Industries plans additional automation projects that will expand the range of applications for Fanuc’s industrial robots. The medium- and long-term goal: to revolutionize industrial work from the ground up.

Bösl says: “Micropsi Industries working with Fanuc’s robots will break new ground by making automation possible where it has never been before.

“In this strategic relationship, our MirAI intelligent controller meets the world’s largest portfolio of industrial robots. Together, we are tapping into the nearly unlimited possibilities of task-specific machine learning for robotics.

“In doing so, we are making it accessible to even more industries and users, ensuring greater flexibility under real production conditions.”