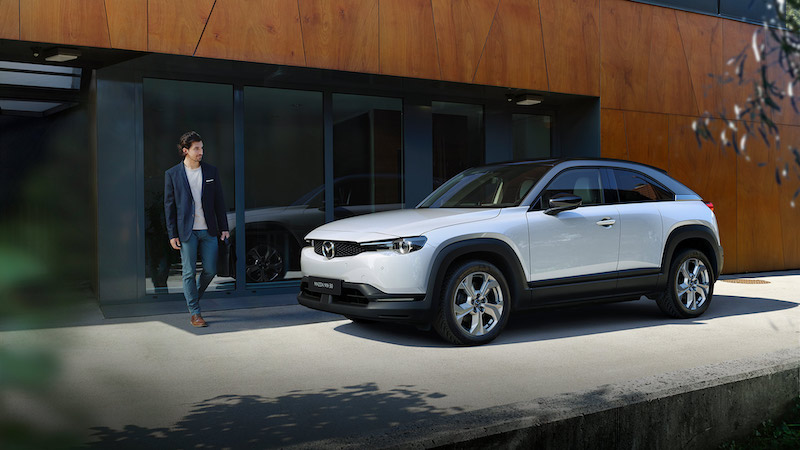 With the global automotive market shifting towards electrification at an unprecedented rate, electric cars or EVs are slated to become the next generation of personal transportation.

By 2040, an estimated 40 million units of EVs are expected to hit the roads, essentially replacing the IC engine. Several manufacturers have already shifted their focus on EV platforms and the latest entry into the segment is the Mazda MX-30, the company’s first all-electric offering.

Taking the MX-30 as an example, we can see how far the EV industry has come over the years. Mixing style and practicality with its rear-hinged doors, the 2022 MX-30 is as good as a modern EV can get.

Along with Mazda, several other manufacturers have already released their offerings including the Ford Mustang Mach E, Hyundai Ioniq 5, Kia EV6, and more.

Like most of its competitors, the Mazda MX-30 gets a fairly large 30 kWh battery pack that promises a range of around 100 miles per charge. While this is lower than most of its rivals, the battery is capable of fast charging through a DC fast charger.

Mazda also limits its latest EV to just one electric motor that produces just over 140 hp. With no dual-motor setup, all-wheel drive is not available even as an option. However, a plug-in hybrid version is slated to launch shortly, bringing all-wheel-drive to its inventory.

As expected, the MX-30 is slower than its competitors in terms of acceleration. However, Mazda has worked on the driving dynamics and it can be quite fun to drive when pushed around corners, but the limited performance spoils the whole experience. Fortunately, the MX-30 is more affordable than its rivals, starting at just over $34,000.

While there is a noticeable increase in performance and reliability, the biggest reason to consider EVs as the future is zero-emission. Because electricity is stored in the battery and is used to power the car, all-electric vehicles produce no emissions.

Although the initial offerings suffered from range anxiety and lackluster performance that couldn’t match their IC counterparts, this field has seen significant development over the last decade, matching and even exceeding the latest IC cars, both in terms of performance and reliability.

Shortly, EVs are expected to get even better and more advanced as the whole industry shifts its focus to electric mobility.

Let’s take a look at some of the main reasons why the automotive future is electric.

One of the most noticeable advantages of switching to an EV is the significant cost savings on running and maintenance. Unlike an IC car, an all-electric car will require a lot less maintenance as the powertrain is a lot simpler. Repair costs are also less as there are less moving components to go wrong.

The move to EVs will also reduce our dependence on oil. They are a lot more convenient to own as they won’t require a trip to the gas station every so often. Most owners can easily charge their EVs, especially if they opt for home charging.

Better for the environment

Since an EV doesn’t use a traditional IC engine, there is little to no emission in the long run. Even with the current adoption rate, carbon dioxide emissions are significantly reduced, limiting pollution and smog.

As the environment recovers from high pollution levels, the better air quality as the result of EVs will lead to less health issues in general. Limiting pollution is the single biggest reason for the switch to EVs, and there are several government incentives to help ease the switch and make the whole transition cheaper.

Because of the simpler powertrain and refined nature of EVs, they are less stressful to drive around in. With little to no vibrations and noise, drivers will be able to focus on their driving. Other than the faint whining of the electric motor, only the tire and wind noise are heard inside the cabin.

Noise pollution levels will also decrease significantly. The driving dynamics are also better in most cases as the weight is balanced better thanks to the under-floor battery pack. The low center of gravity also means better cornering ability and reduced aerodynamic drag.

While initial EV offerings could only travel less than 100 miles, current Tesla Model 3 and Nissan LEAF e+ can easily cross the 200-mile mark. Adding to the ownership experience is the fast-growing charging infrastructure.

With the latest battery technologies, most EVs can be topped up in under an hour when using fast chargers, making them nearly as convenient as filling up with gas. As expected, the charging time is expected to decrease, bridging the gap even further.

Gone are the days when EVs were limited to small city cars. Nowadays, there are different types of EVs to choose from, ranging from sleek sports cars to large three-row SUVs.

Advancements in the EV space have allowed manufacturers to even develop pickup trucks and long-range delivery trucks, bringing them one step closer to taking over the market from their IC counterparts.

Customers looking at hybrid variants for better fuel economy and range can also safely make the switch to EVs now as they don’t suffer from range anxiety. As the market grows for EVs, the prices are also expected to reduce.