Humans have always been fascinated by scales different than theirs, from giant objects such as stars, planets and galaxies, to the world of the tiny: insects, bacteria, viruses and other microscopic objects. While the microscope allows us to view and observe the microscopic world, it is still difficult to interact with it directly.

However, human-robot interaction technology might change all that. Microrobots, for instance, can interact with the environment at much smaller scales than us. 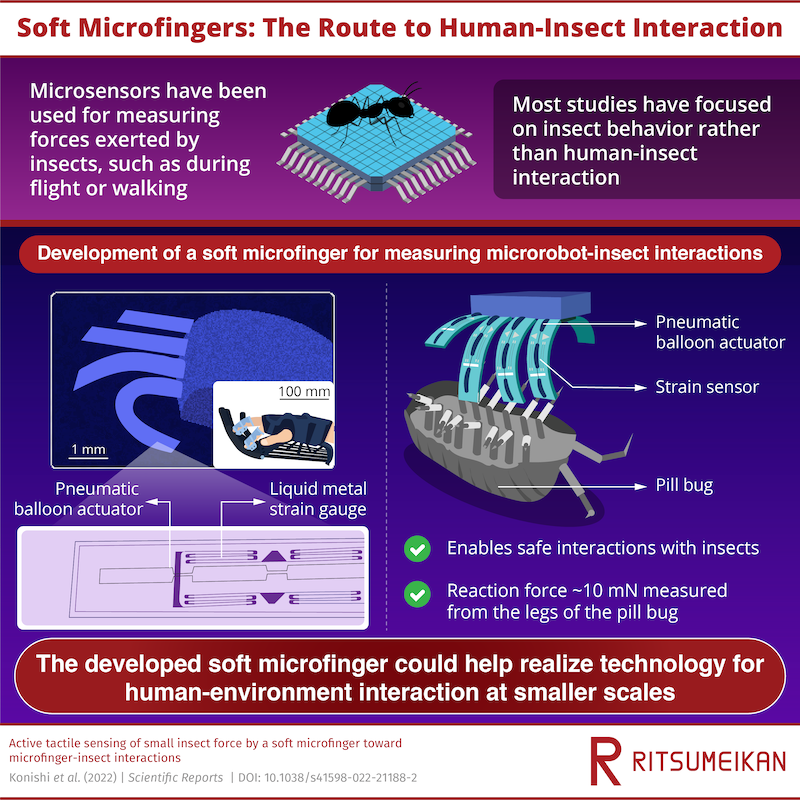 Microsensors have been used for measuring forces exerted by insects during activities such as flight or walking. However, most studies so far have only focused on measuring insect behavior rather than a direct insect-microsensor interaction.

Against this backdrop, researchers from Ritsumeikan University in Japan have now developed a soft micro-robotic finger that can enable a more direct interaction with the microworld.

The study, led by Professor Satoshi Konishi, was published in Scientific Reports on 10 October 2022.

“With a robotic glove, a human user can directly control the microfingers. This kind of system allows for a safe interaction with insects and other microscopic objects.”

The reaction force measured from the legs of the pill bug was approximately 10 mN (millinewtons), which agreed with previously estimated values. While a representative study and a proof-of-concept, this result shows great promise towards realizing direct human interactions with the microworld.

Moreover, it can have applications even in augmented reality (AR) technology. Using robotized gloves and micro-sensing tools such as the microfinger, many AR technologies concerning human-environment interactions on the microscale can be realized.

Prof Konishi says: “With our strain-sensing microfinger, we were able to directly measure the pushing motion and force of the legs and torso of a pill bug – something that has been impossible to achieve previously.

“We anticipate that our results will lead to further technological development for microfinger-insect interactions, leading to human-environment interactions at much smaller scales.”

Indeed, the team at Ritsumeikan University says it has opened doors to a whole new world for humans to interact with, and “we’re just as excited to explore it”.