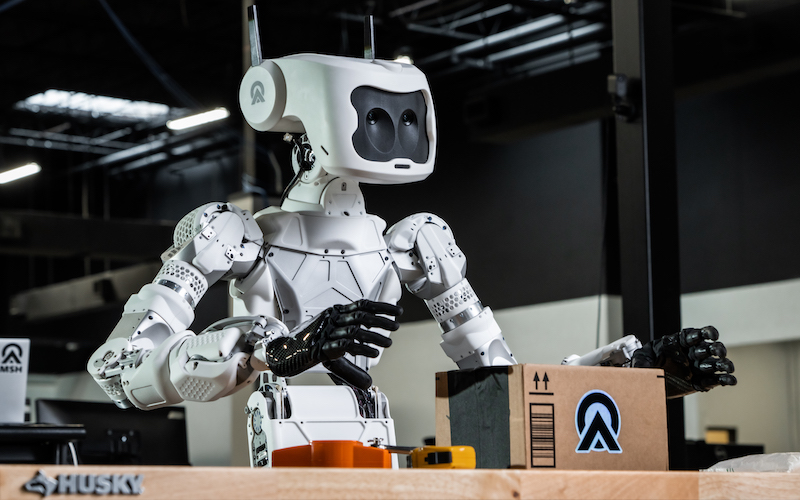 Apptronik, an Austin, US-based company specializing in the development of versatile, mobile robotic systems, has agreed a partnership with NASA to accelerate commercialization of its new humanoid robot.

The robot, called Apollo (main picture), will be one of the first humanoids available to the commercial markets.

At Apptronik’s headquarters in Austin, Texas, the first prototype of Apollo is now complete, with the expectation of broader commercial availability in 2023.

Unlike special-purpose robots that are only capable of a single, repetitive task, Apollo is designed as a general-purpose robot capable of doing a wide range of tasks in dynamic environments. Apollo will benefit workers in industries ranging from logistics, retail, hospitality, aerospace and beyond.

NASA is known across the globe for its contributions to the advancement of robotics technology. NASA first partnered with Apptronik in 2013 during the DARPA Robotics Challenge (DRC), where founders were selected to work on NASA’s Valkyrie Robot.

The government agency has now selected Apptronik as a commercial partner to launch a new generation of general-purpose robots, starting with Apollo.

Jeff Cardenas, CEO and co-founder of Apptronik, says: “Continued investment from NASA validates the work we are doing at Apptronik and the inflection point we have reached in robotics. The robots we’ve all dreamed about are now here and ready to get out into the world.

“These robots will first become tools for us here on Earth, and will ultimately help us move beyond and explore the stars.”

In addition to its work with NASA, Apptronik’s team has partnered with leading automotive OEMs, major transportation and logistics companies, and government agencies.

Boasting notable names including Dr Nicholas Paine, co-founder and chief technology officer of Apptronik and Dr Luis Sentis, co-founder and scientific advisor, its team is respected as among the best in the world.

A growing hub for robotics, the Austin-based company continues to recruit top talent looking to bring their innovations to market now.

Apptronik is recognized for its emphasis on human-centered design, building beautifully designed and user-friendly robotic systems.

As part of this commitment, it selected premier design firm argodesign as its partner in designing Apollo with the goal of creating robots capable of working alongside humans in our most critical industries. The team’s focus now is to scale Apollo so that it can be customer-ready in 2023.