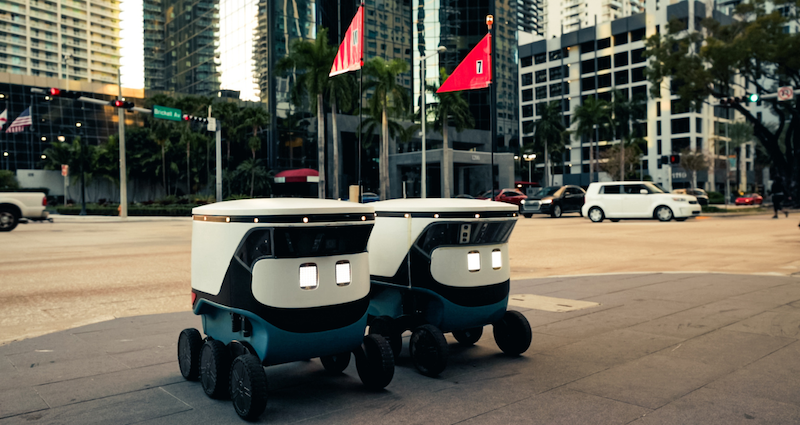 There’s a new sidewalk-savvy robot in the robot world, and it’s delivering coffee, grub and a taste of fun.

The bot is garnering interest for Oakland, California startup Cartken. The company, founded in 2019, has rapidly deployed robots for a handful of customer applications, including for Starbucks and Grubhub deliveries.

Cartken CEO Chris Bersch says that he and co-founders Jonas Witt, Jake Stelman and Anjali Jindal Naik got excited about the prospect for robots because of the technology’s readiness and affordability. The four Google alumni decided the timing was right to take the leap to start a company together.

Bersch says: “What we saw was a technological inflection point where we could make small self-driving vehicles work on the street. Because it doesn’t make sense to build a $20,000 robot that can deliver burritos.”

New and established companies are seeking business efficiencies as well as labor support amid ongoing shortages in the post-Covid era, driving market demand.

Revenue from robotic last-mile deliveries is expected to grow more than 9x to $670 million in 2030, up from $70 million in 2022, according to ABI Research.

Cartken offers robots as a service (RaaS) to customers in a pay-for-usage model. This way, as a white- label technology provider, Cartken enables companies to customize the robots for their particular brand appearance and specific application features.

It’s among a growing cohort of companies riding the RaaS wave, with ambitions as far flung as on-demand remote museum visits to autonomous industrial lawn mowers.

Much of this is made possible with the powerful Nvidia Jetson embedded computing modules, which can handle a multitude of sensors and cameras.

The company relies on the Nvidia Jetson AGX Orin to run six cameras that aid in mapping and navigation as well as wheel odometry to measure its physical distance of movement.

Harnessing Jetson, Cartken’s robots run simultaneous localization and mapping, or SLAM, to automatically build maps of their surroundings for navigation. “They are basically level-4 autonomy – it’s based on visual processing, so we can map out a whole area,” says Bersch.

“The nice thing about our navigation is that it works both indoors and outdoors, so GPS is optional – we can localize based on purely visual features.”

Cartken is a member of Nvidia Inception, a program that helps startups with GPU technologies, software and business development support.

Cartken’s robots are serving Grubhub deliveries at the University of Arizona and Ohio State. Grubhub users can order on the app as normally they would, and get a tracking link to follow their order’s progress. They’re informed that their delivery will be by a robot, and can use the app to unlock the robot’s lid to grab grub and go.

Some might wonder if the delivery fee for such entertaining delivery technology is the same. “I believe it’s the same, but you don’t have to tip,” Bersch says.

Mitsubishi Electric is a distributor for Cartken in Japan. It relies on Cartken’s robots for deployments in AEON Malls in Tokoname and Toki for deliveries of Starbucks coffee and food.

The companies are also testing a “smart city” concept for outdoor deliveries of Starbucks goods within the neighboring parks, apartments and homes. In addition, Mitsubishi, Cartken and others are working on deliveries inside a multilevel office building.

Looking ahead, Cartken’s CEO says the next big challenge is scaling up robot manufacturing to keep pace with orders. It has strong demand from partners, including Grubhub, Mitsubishi and UK delivery company DPD.

Cartken in September announced a partnership with Magna International, a global leader in automotive supplies, to help scale up manufacturing of its robots. The agreement offers production of thousands of AMRs as well as development of additional robot models for different use cases.