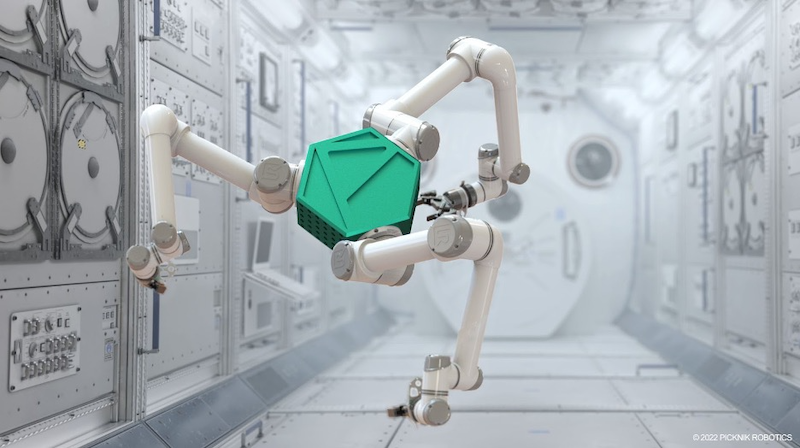 PickNik Robotics, a provider of robotics software and engineering services, has won a SpaceWERX contract to work on robotics for the US Space Force.

“We look forward to working with Space Force, NASA, and other organizations in the space economy to help them navigate the complexity and potential of robotics, specifically robotic arms, in that realm.”

The SpaceWERX contract is for PickNik Robotics to help develop enhanced control for on-orbit capture of space assets and to increase the overall efficiency and safety of US Space Force operations.

The work will focus on capturing and manipulating objects in orbit using robotic arms for In-space Servicing, Assembly and Manufacturing (ISAM). The Nuclear and Applied Robotics Group at the University of Texas, Austin, is collaborating with PickNik on the project.

SpaceWERX is the innovation arm of the US Space Force and a part of AFWERX, the Air Force Research Laboratory. Headquartered at the Los Angeles AFWERX hub, SpaceWERX collaborates with innovators to accelerate capabilities and shape the future in space.

The NASA SBIR Phase I contract is for PickNik Robotics to further advance its work with NASA on supervised autonomy.

PickNik will develop machine learning models that will enable operators to use high-level instructions to direct a robot to do a variety of tasks including opening station module doors, cabinets, and drawers, as well as interact with other objects such as valves, buttons, and switches.

The work resulted in a general infrastructure for planning and executing motions in a static environment. Insights and experience from that project have largely shaped MoveIt Space, PickNik’s supervised autonomy software.

PickNik Robotics was also recently awarded a major Advanced Industries Accelerator (AIA) grant for its work in space robotics from the Colorado Office of Economic and International Trade.

The AIA Program was created in 2013 to promote growth and sustainability in Colorado’s advanced industries by driving innovation, accelerating commercialization, encouraging public-private partnerships, increasing access to early-stage capital, and creating a strong ecosystem that increases the state’s global competitiveness.

Dr Mark Moll, director of research at PickNik Robotics, says: “It is vitally important to enhance safety and lower the cost of spaceflight through robotics, and these three wins will enable us to support that endeavor.

“Along with our MoveIt Space and MoveIt Studio software, we have more than 40 people at PickNik Robotics, with 363 years of combined robotics experience, who are ready to help organizations of all kinds embrace the massive opportunity in space.”

In late March 2022, PickNik Robotics announced it was collaborating with Sierra Space on robotics for space habitats and deep space missions. PickNik is also working with Motiv Space Systems and Tethers Unlimited on space robotics.