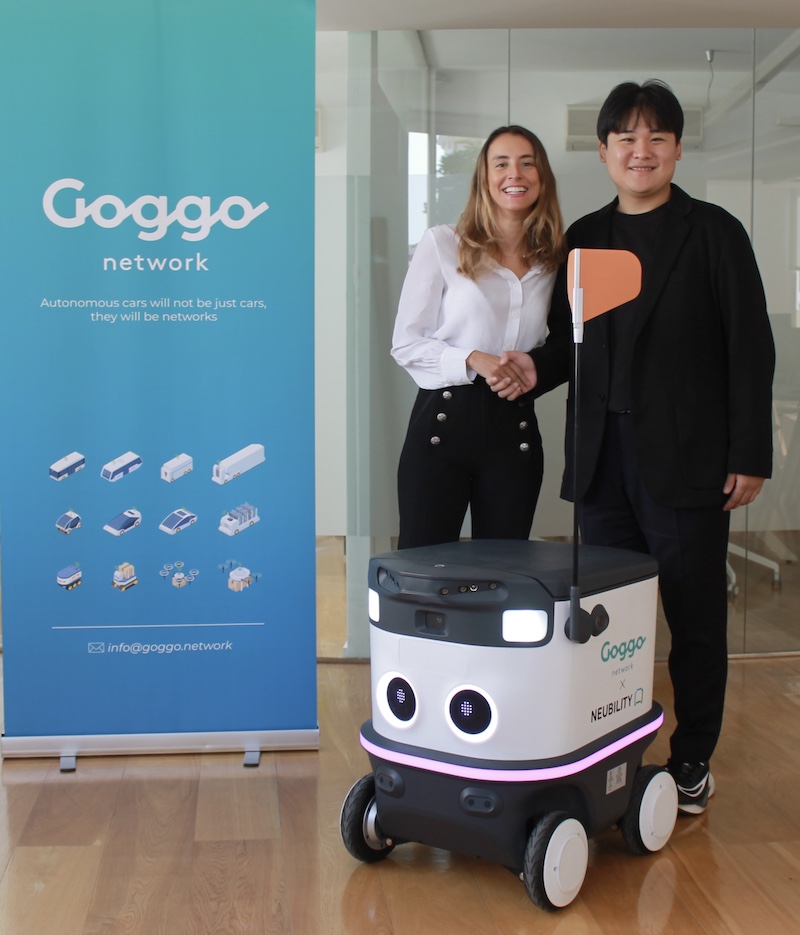 Neubility, a Korean autonomous robot company, and Goggo Network, a European logistic operator of autonomous vehicles and robots, have signed an agreement to “strengthen autonomous logistics solutions based on robots”.

The two companies plan to expand services via closer cooperation with logistics firms in Europe, promoting collaboration in the operation of robot-based delivery platforms.

Based on this, it enables clients and B2B partners to experience speedy management and allocation with channel optimization to enhance operational efficiency and cost.

Neubility is now preparing its first global service and has actively conducted a variety of demonstration projects for Neubie-based delivery in and around local downtown areas, university towns, and golf courses since last year.

This year, it has successfully set up stable processes for the mass production of robots, improving robot performance. The company plans to commercialize autonomous delivery services for golf courses before the end of the year.

Goggo Network was founded in 2018 by serial entrepreneur Martin Varsavsky and Yasmine Fage to become the largest operator of autonomous and electric fleets in EMEA, by building a Hybrid network of Autonomous Vehicles for cargo and passenger transport.

To achieve this vision, Goggo has raised over €24 million in Venture Capital funding so far from Softbank and Axel Springer Ventures, in order to develop a proprietary platform to automate the logistic chain processes.

Goggo is solving the last and middle mile logistic issues for consumers and retailers in a B2B2C model with autonomous vehicles, as well as addressing key environmental aspects like pollution and traffic.

At the moment it has been granted the first autonomous delivery robots operating license in Spain (Zaragoza), where it is exploring opportunities to deploy on-road vehicles and create the first autonomous logistics network in Spain, and in Q4 of 2022, it will launch its first on road AV operations in France.

Yasmine Fage, COO at Goggo Network, says: “We, at Goggo, as a robot agnostic autonomous logistic operator, prioritize the inclusion of top level tech providers like Neubility to build our fleet of AVs.

“We will continue to cooperate with partners like Neubility, to continue taking the lead in bringing innovation to logistics solutions in Spain, France and all throughout Europe.”

Neubility CEO Lee Sang-min says: “We are very pleased to collaborate with Goggo Network with diverse service experiences and differentiated platforms and to take the first step toward advancing into global markets.

“Based on those that will be commercialized this year, we will continuously deliver stable services to both local and global markets, thereby expanding autonomous mobile robot ecosystems.”