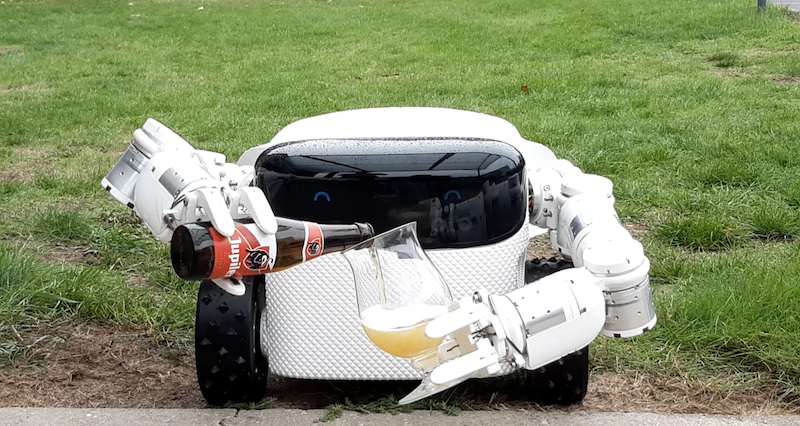 And the company’s upcoming model X has two arms and can do multiple tasks, such as weeding, cleaning the patio, mowing, collecting fruit and nuts, collecting litter, serving drinks and even pouring a beer.

EEVE has released a video of its latest prototype doing all of those things. This model is known as Willow X and is sold at a price point of $4,000.

The company says the robot revolution is “unstoppable”, with start-ups and multinationals pouring billions of dollars – Tesla included – into making the home robot “we all want”.

It’s an enormous challenge today and the failure rate is high, money is being burnt at a fast rate, the race to deliver the first true affordable robot is going at high speed. We don’t see many succeeding, do you have an intelligent robot at home?

Amazon tried with the Astro home robot, iRobot has some intelligent vacuum robots but is still relatively basic and still doesn’t seem to be succeeding in releasing their long-awaited lawn mowing robot.

Sony has been showcasing a humanoid robot for decades, until they eventually pulled the plug. And recently, SoftBank halted the production of the Pepper and Anki went bankrupt after burning $180 million in funding.

The list goes on and on and on… some describe the market situation as a “disaster”. The customer doesn’t seem to find any satisfaction from robots that are being offered with the technology from the big players.

Could EEVE provide the answer? Maybe it’s too early to tell. But they at least have thousands of robots mowing lawns everyday. It’s unlikely they will suddenly be redesigned as humanoids like the ones Tesla is planning, but maybe customers don’t yet want robots that look too human.

The company says its robot doesn’t need a perimeter wire and takes smart decisions itself several times per second. The beginning of a future in which robots can do multiple tasks for us.

EEVE showcased a leaf-shredding tool for their existing model called Willow. Customers can add the new tool to their existing robot and make the robot do multiple garden tasks.

EEVE plans to release a weeder tool and a fertiliser tool in the coming 12 months and possibly other products. It’s also offering an API and an SDK to developers to make their own tools, enabling the robot to do more and more tasks.

Their upcoming model, Willow X, has two robot arms yet is still based on the existing robot platform and will be able to use many more tools and not only tools that are specifically developed for Willow, but also manual tools that us humans use everyday day.

In the video that they released, you can see Willow X mowing the lawn with a standard manual reel mower, you also see Willow X pouring a bottle of beer into a glass without using any extra tools.