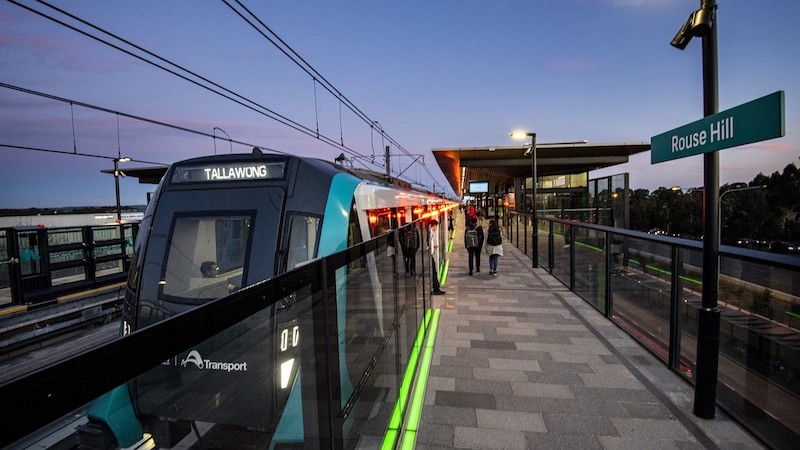 Driverless systems like the one in Sydney represent the future of urban clean and efficient transport. In this article, train manufacturer Alstom answers some key questions about driverless trains.

What technologies are required for a train to operate automatically?

There are several intelligent systems that enable a metro to operate without a driver. Sensors and components on the metro communicate with digital objects on the ground like balises as they pass them by. As the metro travels along its route, these systems communicate back and forth with each other continually to ensure that everything is going smoothly.

How does a metro know where to go?

The movement of driverless metros like Sydney are managed by a central command centre according to the metro’s departure schedule. This control centre is digitally connected to the metro line’s trackside
interlocking system (one of the intelligent objects along tracks) and asks it to open a path for the metro.

The interlocking system then checks to confirm that this particular route has not already been assigned to another vehicle, and then sets all the switch points along that path to create the route. Once everything is confirmed, the system sends a signal telling the metro that it is free to safely travel along the path that has been outlined.

Once the trip has been initiated, the intelligent system onboard the metro then enables it to move around the entire network, telling it when to move forward, accelerate or brake without a driver.

How does the metro know how fast to go?

Among the intelligent objects arrayed on the ground, there are beacons positioned along the tracks that enable the driverless metro to independently identify its location within the network.

Since the metro already knows where it is and where it is going, it also knows the curves and slopes and can determine for itself how fast it should travel and at what point it needs to brake to arrive at the right spot on the platform.

Since there is no driver, it’s the control centre that tells the metro whether or not it might need to accelerate a bit more or less to arrive at its destination at the exact time.

How does the metro know if there is another metro in front of it?

All automated and driverless metros are geolocated in real time thanks to the beacons positioned along the tracks. The position of the metro is then sent to the intelligent system on the ground, which shares this information with the other metros so that they all know where each other are.

But that’s not all, every metro also indicates its position to the control centre, so that operators can see where all the metros are at any given moment and can orchestrate traffic along the entire line from their comfortable chairs.

How does the metro know which stations to stop at?

The control centre gives the metro its destination and tells it where it must go and at which stations to stop. The driverless metro can then just follow the route it has been given by simply following the established paths that have been laid out for it.

How does the metro manage to position itself in front of the automatic doors if it doesn’t have a driver?

Just like for geolocation and speed, the beacons are also responsible for indicating to the metro how to precisely position itself in the station to open the doors at the right time and in the right place. It is thanks to them that the metro itself knows how to stop right in front of the platform doors.

Who opens the metro doors?

The intelligent system on board the metro takes care of that. Only when the automated metro is correctly stopped at the platform, directly in front of the platform doors, can the system simultaneously open the metro and platform doors to allow the passengers to enter and exit the metro. The same system also guarantees that the metro can’t leave while the doors are still open.

Who takes control if there is an incident?

With driverless or automated metros, there is always a human operator in the control centre, who is the overseer on board. The operator can always intervene and take over control if the metro malfunctions. The control room operator can also use the metro’s intercom systems to speak to passengers and provide instructions or updates.

A human operator in the control centre overseeing everything on board.

Is it really a secure system?

Yes, automatic metro systems are secure. They actually improve safety because they limit the risk of human error.

How do you ensure that automated metro systems don’t make mistakes?

What are the advantages of using automatic metros?

Automating metros improves the regularity and punctuality of metros enabling the line to handle more vehicles and passengers. Normally, each metro driver accelerates and brakes a little bit differently, so metros with drivers don’t take the exact same amount of time to make the exact same journey, this means the traffic won’t ever be truly consistent.

But fortunately, computers have no personality or individual behaviour, so when they are in charge, every metro drives the exact same way on every trip. This maybe sounds a bit boring, but it makes the metros more accurate, efficient, and also more sustainable in terms of energy use.

Driverless metros can also consistently run while maintaining the highest authorised speed, which improves the overall performance, the number of metros that can run per hour and thus the number of passengers that can get on board – meaning you don’t have to wait.

Are there any new innovations that further improve automatic metros?

Yes, there are two new innovations that will be presented below.

The first innovation is a super intelligent system on board the metro.

Today there is a new on-board metro system that is even more intelligent. It no longer needs to coordinate with objects on the tracks, and instead talks directly to other metros. It can therefore make safe decisions more quickly.

The second innovation is that the metros communicate with each other.

We now have metros that communicate directly with each other to exchange positions. They can therefore be closer to each other, the second adapting automatically to the position of the metro in front. Each metro is therefore more autonomous, and more easily capable of adapting in unfortunate situations than a manual system.

If a metro breaks down, blocking two metros behind it, the metro stuck in the centre will be able to coordinate with the metro behind it, to back up at the same time and let passengers off at the previous station. This avoids a metro (and passengers!) being stuck between two stations.