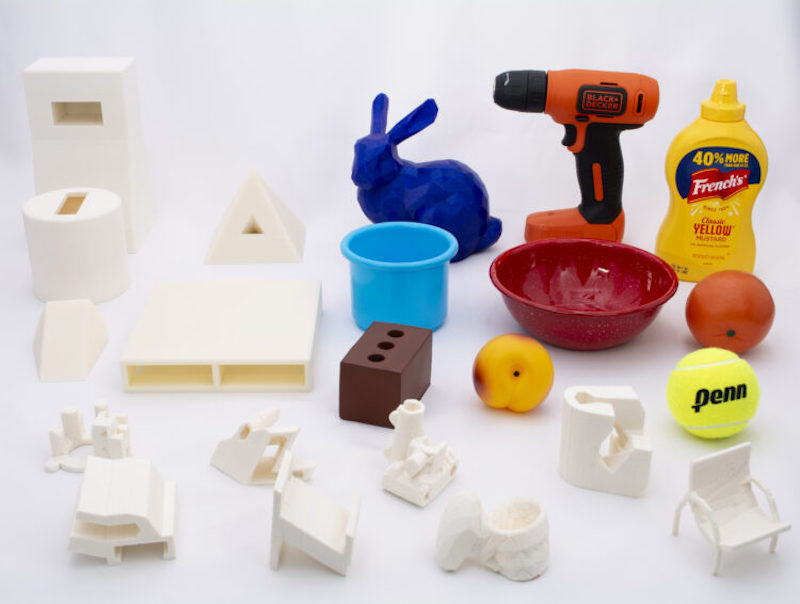 At the beginning of the Covid-19 pandemic, car manufacturing companies such as Ford quickly shifted their production focus from automobiles to masks and ventilators.

To make this switch possible, these companies relied on people working on an assembly line. It would have been too challenging for a robot to make this transition because robots are tied to their usual tasks.

Theoretically, a robot could pick up almost anything if its grippers could be swapped out for each task. To keep costs down, these grippers could be passive, meaning grippers pick up objects without changing shape, similar to how the tongs on a forklift work.

A University of Washington team created a new tool that can design a 3D-printable passive gripper and calculate the best path to pick up an object. The team tested this system on a suite of 22 objects – including a 3D-printed bunny, a doorstop-shaped wedge, a tennis ball and a drill.

The designed grippers and paths were successful for 20 of the objects. Two of these were the wedge and a pyramid shape with a curved keyhole. Both shapes are challenging for multiple types of grippers to pick up.

The team will present these findings August 11 at SIGGRAPH 2022.

Senior author Adriana Schulz, a UW assistant professor in the Paul G. Allen School of Computer Science & Engineering, says: “We still produce most of our items with assembly lines, which are really great but also very rigid. The pandemic showed us that we need to have a way to easily repurpose these production lines.

“Our idea is to create custom tooling for these manufacturing lines. That gives us a very simple robot that can do one task with a specific gripper. And then when I change the task, I just replace the gripper.”

Passive grippers can’t adjust to fit the object they’re picking up, so traditionally, objects have been designed to match a specific gripper.

Co-author Jeffrey Lipton, UW assistant professor of mechanical engineering, says: “The most successful passive gripper in the world is the tongs on a forklift. But the trade-off is that forklift tongs only work well with specific shapes, such as pallets, which means anything you want to grip needs to be on a pallet.

For any given object, there are many possibilities for what its gripper could look like. In addition, the gripper’s shape is linked to the path the robot arm takes to pick up the object.

If designed incorrectly, a gripper could crash into the object en route to picking it up. To address this challenge, the researchers had a few key insights.

Lead author Milin Kodnongbua, who completed this research as a UW undergraduate student in the Allen School, says: “The points where the gripper makes contact with the object are essential for maintaining the object’s stability in the grasp. We call this set of points the ‘grasp configuration.

“Also, the gripper must contact the object at those given points, and the gripper must be a single solid object connecting the contact points to the robot arm. We can search for an insert trajectory that satisfies these requirements.”

When designing a new gripper and trajectory, the team starts by providing the computer with a 3D model of the object and its orientation in space — how it would be presented on a conveyor belt, for example.

Kodnongbua says: “First our algorithm generates possible grasp configurations and ranks them based on stability and some other metrics.

“Then it takes the best option and co-optimizes to find if an insert trajectory is possible. If it cannot find one, then it goes to the next grasp configuration on the list and tries to do the co-optimization again.”

Once the computer has found a good match, it outputs two sets of instructions: one for a 3D printer to create the gripper and one with the trajectory for the robot arm once the gripper is printed and attached.

The team chose a variety of objects to test the power of the method, including some from a data set of objects that are the standard for testing a robot’s ability to do manipulation tasks.

Co-author Ian Good, a UW doctoral student in the mechanical engineering department, says: “We also designed objects that would be challenging for traditional grasping robots, such as objects with very shallow angles or objects with internal grasping — where you have to pick them up with the insertion of a key.”

The researchers performed 10 test pickups with 22 shapes. For 16 shapes, all 10 pickups were successful. While most shapes had at least one successful pickup, two did not. These failures resulted from issues with the 3D models of the objects that were given to the computer.

For one — a bowl — the model described the sides of the bowl as thinner than they were. For the other — an object that looks like a cup with an egg-shaped handle — the model did not have its correct orientation.

The algorithm developed the same gripping strategies for similarly shaped objects, even without any human intervention. The researchers hope that this means they will be able to create passive grippers that could pick up a class of objects, instead of having to have a unique gripper for each object.

One limitation of this method is that passive grippers can’t be designed to pick up all objects. While it’s easier to pick up objects that vary in width or have protruding edges, objects with uniformly smooth surfaces, such as a water bottle or a box, are tough to grasp without any moving parts.

Still, the researchers were encouraged to see the algorithm do so well, especially with some of the more difficult shapes, such as a column with a keyhole at the top.

Good says: “The path that our algorithm came up with for that one is a rapid acceleration down to where it gets really close to the object. It looked like it was going to smash into the object, and I thought, ‘Oh no. What if we didn’t calibrate it right?’

“And then of course it gets incredibly close and then picks it up perfectly. It was this awe-inspiring moment, an extreme roller coaster of emotion.”

Yu Lou, who completed this research as a master’s student in the Allen School, is also a co-author on this paper. This research was funded by the National Science Foundation and a grant from the Murdock Charitable Trust. The team has also submitted a patent application: 63/339,284.