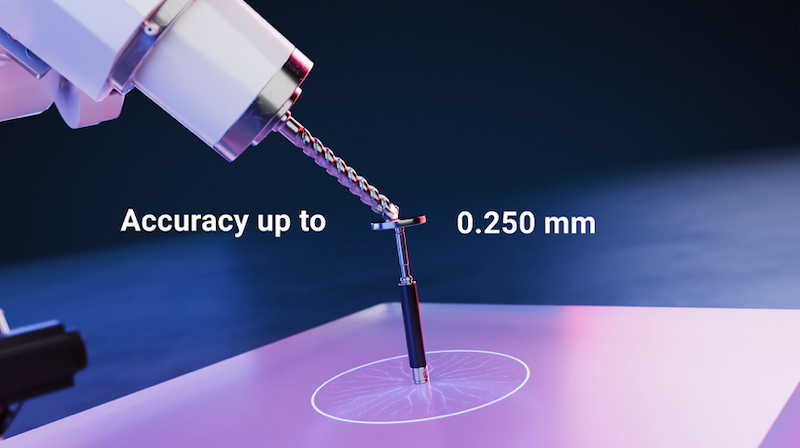 RoboDK says TwinTool is a “cost-effective, quick, and easy solution” to improve the tool’s accuracy in a wide variety of manufacturing applications. It adds that it is a “competitive alternative to costly and complex robot calibration services currently available on the market”.

Industrial robots are increasingly used for high-accuracy manufacturing tasks, such as assembly, soldering, and machining. However, new users are sometimes disappointed by the apparent low accuracy of their robots. They invest in expensive robot calibration systems to try to improve the accuracy.

Albert Nubiola, CEO of RoboDK, explains this is not always required: “Many users don’t realize how important it is to calibrate the tool properly. They believe they need to calibrate the whole robot. However, properly calibrating the tool center point (TCP) can provide a significant improvement in accuracy.”

Industrial robots have high repeatability, but low accuracy. This means they can move to the exact same position every time (repeatability), but their position doesn’t accurately match the world coordinate system (accuracy).

There are two main types of calibration procedures for improving a robot’s accuracy. Robot calibration requires precision laser systems to calibrate the robotic mechanism itself.

Tool center point (TCP) calibration is a simpler procedure to ensure the programming system has an accurate model of the robot’s tool.

Samuel Bertrand, software developer at RoboDK, says: “TwinTool is a quick and affordable solution to automatically calibrate the robot’s TCP compared to other solutions such as laser trackers. Laser calibration is expensive, and many robot applications do not need such high accuracy.”

The typical way of calibrating a robot tool center point (TCP) is by a 4-point method, which consist of taking a series of at least for 4 joint readings when moving the tool to the same point with different orientations. This process is time consuming and less accurate as the user needs to move the robot in different position manually.

TwinTool calibration functionality is distributed as a RoboDK App, a plugin that extends the capabilities of RoboDK’s highly popular robot programming software.

RoboDK TwinTool requires an off-the-shelf linear gauge sensor (or LVDT) to directly communicate with any robot and to calculate the robot TCP without human intervention. TwinTool automatically records an unlimited number of points, and the linear gage sensor offers great accuracy for tool definition.

The app is compatible with a wide range of sensors from major brands including Mitutoyo, Keyence and Sylvac, allowing it to be versatile with any hardware. Other sensor brands can also be integrated on request.

RoboDK TwinTool supports more than 600 robot arms from 50 different robot manufacturers and is suited for many industrial environments.

This follows RoboDK’s well-established philosophy of remaining brand-agnostic for hardware.

Equally important, RoboDK places great emphasis on the ease of use and safety of its products. TwinTool runs directly from RoboDK, making the bridge between the robot controller and the sensor.

No programming skills are required. Users only need RoboDK simulation software, a robot, its tool (spherical or conical), and a sensor. Singularities and collisions are avoided, and trajectories automatically calculated.

Samuel Bertrand says: “We have created a user-friendly wizard to ensure that the calibration is done correctly and safely. This is simple enough that it can be used by operators that don’t have robotics knowledge.”

To calibrate a robot tool, the user follows this three-step procedure in RoboDK’s software:

With TwinTool, users can quickly and automatically improve the accuracy of their tool by up to 0.250 mm with some robot setups. This provides an accuracy improvement by 2 to 10 times, depending on the robot and the tool.

“Without this calibration,” says Nubiola, “robot errors can be in the range of 2-5 mm. With this tool calibration, you can usually reduce robot errors up to 0.250-1 mm depending on your application.”

This accuracy improvement is more than enough for most robot applications, even those that require precision. This can save users a lot of money on unnecessary robot calibration services.

Users can now request to add TwinTool to their copy of the RoboDK software as an optional RoboDK App.

Bertrand explains they will continue to improve TwinTool’s functionality. “Currently, the tool is oriented towards maintenance modes,” Nubiola says. “However, we are working towards a mode that will run the calibration procedure automatically during production.”

RoboDK also plans to extend its App interface by creating a RoboDK App Marketplace. They will invite companies to develop and publish their own apps for the software.