Global fab equipment spending for front-end facilities is expected to increase 20 percent year-over-year to an all-time high of $109 billion in 2022, marking a third consecutive year of growth following a 42 percent surge in 2021.

This is according to industry association SEMI, which published the figure in its latest quarterly World Fab Forecast report. Fab equipment investment in 2023 is expected to remain strong.

Ajit Manocha, president and CEO of SEMI, says: “The global semiconductor equipment industry remains on track to cross the $100 billion threshold for the first time as shown in our latest update of the World Fab Forecast.

“This historic milestone puts an exclamation point on the current run of unprecedented industry growth.” 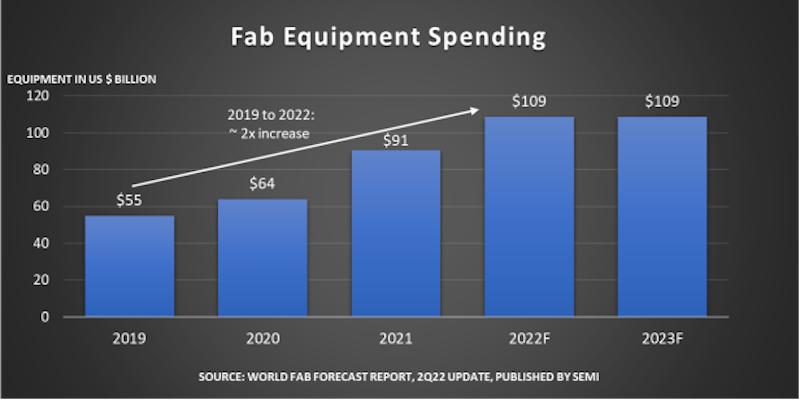 Taiwan is expected to lead fab equipment spending in 2022, increasing investments 52 percent YoY to $34 billion, followed by Korea at $25.5 billion, a 7 percent rise, and China at $17 billion, a 14 percent drop from its peak last year.

Europe/Mideast is forecast to log record high spending of $9.3 billion this year and, while comparatively smaller than outlays in other regions, its investments would represent a staggering growth of 176 percent YoY.

Taiwan, Korea and Southeast Asia are also expected to register record-high investments in 2023.

The SEMI World Fab Forecast report shows the global industry increasing capacity 8 percent this year after a 7 percent rise in 2021.

Over 85 percent of equipment spending in 2022 will stem from capacity increases at 158 fabs and production lines, a proportion expected to edge down to 83 percent next year as 129 known fabs and lines add capacity.