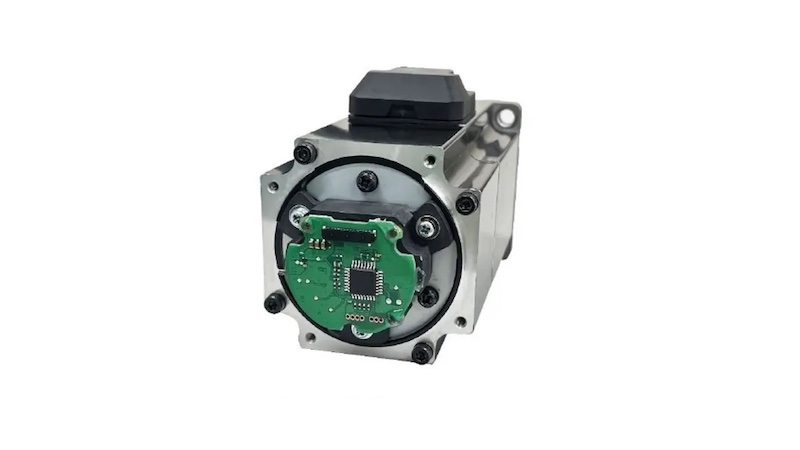 Nidec and its subsidiary Nidec Sankyo have jointly developed an AC servo motor (resolution: 17bit) equipped with Zignear, the position detection technology that can be applied to industrial robots and replace encoders.

The motor is intended for application in industrial robots and automated guided vehicles.

An encoder, which is a sensor used to detect the rotation of a brushless DC motor mainly, is essential in adjusting a motor to an intended location, and keeping its rotation consistent.

Conventionally, a brushless DC motor has required an encoder, as it has been difficult to detect its accurate location due to the “inconsistency” in the magnetic sensor, or the installation of a hall sensor and sensitivity in particular.

Now, however, after developing an algorithm that corrects such inconsistency, Nidec says it has successfully improved the location detection accuracy with the use of general-purpose microcomputers.

Despite its high accuracy and capability to operate in a strong magnetic field, an optical encoder tends to become larger in proportion to its accuracy, requiring precise positioning.

This is why an optical encoder tends to be costly due to its code wheel and other components, and installation cost, and to deteriorate in an environment full of dust, oil, and so on.

Meanwhile, a magnetic encoder operates even in a dusty environment, and is cost-competitive as it works with a relatively inexpensive IC chip, but the encoder’s accuracy is lower than that of an optical counterpart.

Nidec’s Zignear, which requires as small a number of components (only a hall sensor and a general-purpose microcomputer) as does a magnetic encoder, uses software to maintain location detection and tracking capabilities that are equal to those of an optical encoder.

Going forward, in the fields of industrial robot and mobility system that are becoming increasingly innovative and diverse, Zignear-equipped AC servo motors will contribute to meeting the needs for high-level accuracy, diverse forms of communication, and replacing conventional products.