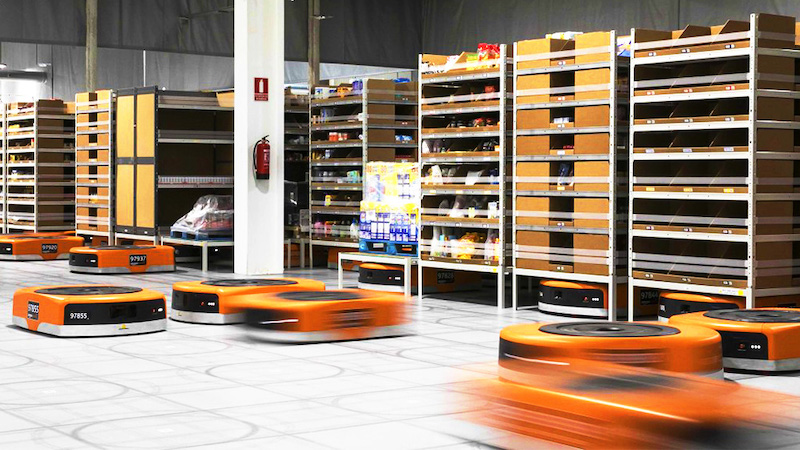 According to ARK Invest research, industrial robot costs will drop by 50-60 percent by 2025. This dramatic drop in costs, combined with other factors such as the global pandemic’s acceleration of industries embracing automation, has resulted in a situation where interest in robotics has reached a fever pitch.

In fact, in the first year of the pandemic venture firms poured $6.3 billion into robotics companies, up nearly 50 percent from the $4.3 billion they invested over the same period a year earlier.

Further, in North America, industrial robot sales had their strongest year ever in 2021. With this activity it’s not surprising that the global market is forecasted to reach $31 billion by 2028.

What is a bit surprising however, is how much of the attention and funding has been focused on single-tasked robots, purpose-built for the task they’re supposed to perform. While these innovations are incredibly impressive in their own right, they can also be incredibly inefficient.

With businesses facing extraordinary pressure to find efficiencies and save costs, and the future of the economy mired in uncertainty in the form of supply chain challenges and an imbalance between supply and demand, these singular focused robots pose more of a hindrance than a solution.

Thankfully, we are seeing a shift taking place where companies and funding are focused on creating hi-tech workers that are generalists rather than specialists.

Below are some of the factors driving that shift.

It’s not hyperbole to say that many aspects of business evolution across industries today can be traced back to one single company: Amazon.From manufacturing and sales to customer experiences, Amazon has had an undeniable effect on how businesses operate and how people consume.

We are seeing the next iteration of trend setting from Bezos’ behemoth with the company recently announcing a $1 billion innovation fund to spur supply chain, fulfillment and logistics innovation.

Several of the startups that Amazon is injecting capital into are robotics companies, including Agility Robots, the deep tech startup designing robots capable of performing limitless tasks as part of a blended workforce.

Of course, Amazon’s interest in robots is certainly not new. This time last year the company reported that it had 350,000 robots coworking alongside human employees at its fulfillment centers around the globe.

However, as they’ve done time and time again, this massive injection of capital and focus on robotics will likely set a new standard for companies across industries.

As robots like Agility’s Digit prove themselves to be beneficial to some of today’s largest manufacturers, other organizations will follow suit – likely in droves as they look – to address some of the major challenges facing manufacturers today and keep up with the competition that will rise in parallel with the adoption of flexible robotics.

Today there are more than 11 million job openings in America, creating a widespread labor shortage that is stifling business.

Manufacturing has been hit particularly hard, with the US Department of Labor publishing a study that found there were 762,000 open manufacturing jobs in the United States in December of 2021.

Those that are working in warehouses and logistics today find themselves facing increased strain as they work to keep up with demand, stocking, packing, moving, and so on – tasks that are responsible for more than 200,000 injuries per year.

To solve this complex labor puzzle, robots are needed to lift the burden of hard, manual labor, provide workforce flexibility, and enable people to focus on other priorities that are key to their organization’s success.

But single purpose robots won’t cut it. Their restrictions and infrastructure requirements add up and it’s simply not feasible to add them for the many functions needed in manufacturing today.

Multi-purpose robots that have the ability to work along humans, and can be easily programmed with different tasks at different times without having to add equipment or workflows are imperative.

But what about all the jobs that will be lost with these more human-like machines? It is true that the World Economic Forum estimated in October 2020 that, by 2025, robotics would displace around 85 million jobs, however, it would also create 97 million new jobs.

In many cases the jobs that robots have started to replace are the ones no worker wants. Robots should not be thought of as a human replacement, but the fact is that the future is a blended workforce – a combination of man/woman and machine.

Keeping up with demand

While the initial impact that the pandemic had on not just the manufacturing industry, but the global economy as a whole was devastating, we have seen an impressive rebound, especially when it comes to consumer demand.

The problem now is keeping up with that demand amidst the supply chain and workforce challenges that persist. Take the surge in consumer purchases of long-lasting goods like washing machines and cars as an example, which are hovering 30 percent to 40 percent above pre-pandemic levels according to a report from USA Today.

While demand has ratcheted up, manufacturers are struggling to keep up with it in light of challenges such as the aforementioned labor shortages and other factors like global chip shortages that are further complicating matters.

Despite positive signs, the fact remains that there is still much uncertainty ahead. Robots will play a tremendous part in helping organizations rise to the challenges they face, but in order to optimize their hitech workers it would be wise for them to think about them as generalists vs specialists.

As the team at Agility points out in a recent blog post: “While some species are specialized or adapted to their environment, the most successful species – including people – are generalists”.

As we’ve seen with the evolution of species, it will be a survival of the fittest when it comes to the robotic workforce.