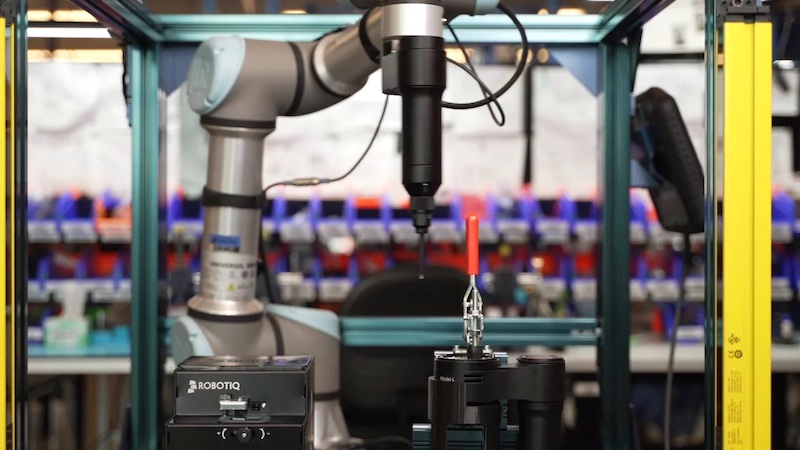 Many people think that robotic screwdriving isn’t a good idea because automated screw driving seems like a difficult, costly, and expensive thing to manage and achieve.

They think that these automated screw driving machines are huge machines that can manage only a small set of operations and are suitable only for high-volume manufacturing businesses and not for small to medium-sized businesses, however, that is not the case.

Robotics screwdriving provides a way through which any business can automate the task of screwdriving and the best thing is that collaborative robots can be used for different processes and situations, even for high-mix, low-volume manufacturing.

Using a collaborative robot for screw driving is a relatively new approach that is now used for screw driving automation. The benefits of robots are evident from the fact that a very large number of companies are now able to achieve automation, which wasn’t possible in the past.

So, what are the benefits of collaborative robot screwdriving? Let’s find out.

What’s even special about using collaborative robots is that you don’t have to be a robotics or programming expert to program the robot. The programming interface is so simple that anyone who is able to use a smartphone for various purposes such as texting, surfing the web, using OmeTv, etc can program the robot for the required task.

We human beings are great at cognitive tasks that are interesting and exciting such as problem-solving, designing, planning, and so on.

We find cognitive tasks to be highly interesting and prefer to be involved in doing such tasks. However, while working in factories, human workers are often assigned dull, boring, and receptive tasks such as screw driving.

This is a dull and boring task that human workers get bored with after a few days of manual screwdriving which reduces the consistency and efficiency of the process.

Instead of human workers wasting their time on such a dull, boring, and repetitive task, robotic screwdriving can take over and perform this task with the same efficiency and consistency. This would mean that screwdriving will be done in exactly the same way every time by the robot.

A major problem with manual screwdriving is that humans are prone to be injured by this process.

Manual screwdriving has several damaging impacts on the human body, especially musculoskeletal disorders and deformities, of which the most common one is carpal tunnel syndrome in which one of the main nerves to the hand is compressed which results in severe pain, loss of sensation and even wasting of muscles.

With robots taking over this repetitive task, there would be no cases of any human workers getting injured by this task and the robot won’t get any kind of damage by performing such repetitive tasks.

Collaborative Robots are extremely flexible and their flexibility comes in very handy. Unlike conventional screwdriving automation machines, these collaborative robots can be readjusted to handle multiple types of screwdriving operations.

This flexibility of collaborative robots in screwdriving is unmatched and these can help in all types of manufacturing processes.

Conventional screwdriving automation machines used to take months for proper deployment but that is not the case with collaborative robots.

A screwdriving collaborative robot can be deployed and become fully functional in just a few days only. This quick deployment ensures that there is minimal disruption in operations during the process of deployment.

A robot taking over this task would be highly reliable because it is not prone to get injured or bored and it will perform the task, in the same manner, every time, just like Omegle, which is a highly reliable platform programmed to help people meet random strangers from around the world.

The accuracy of a robot cannot be questioned or compared to that of a human worker because a robot works exactly the way it is programmed to do so.

We cannot rule out the fact that human workers are much better at recognizing any variability or handling uncertainty but when it comes to consistency then a robot performing a repetitive task like screw driving will perform it in the same way, every time.

Another benefit of using a collaborative robot is that, unlike conventional screwdriving automation machines, these are relatively portable and don’t require much space to set up. These can easily be set up on a table and be functional in no time without becoming a disruption for anyone.