A wide range of industries are using real-time 3D configurators as more businesses strive to engage their customers with interactive and immersive pre-sales and marketing activities, according to Unity, one of the most popular games development engines in the world.

Unity Forma, part of the rage of Unity marketing solutions, provides “an efficient, cost-effective solution to meet that need”, according to the company.

With innovation, technology and adventure at their core, ship design company Arksen needed a new way to showcase their latest marine exploration vessel that aligned to those core values.

When they partnered with a design company specializing in creating shared 3D spaces that work across desktop, mobile, augmented and virtual reality, canVERSE knew exactly where to start.

Eleanor Briggs, marketing director, Arksen, says: “Previously, creating a static render of our vessels would take a couple of weeks to co-ordinate.

“Now, the model feels alive as clients can interact with the Arksen 85 in real-time, viewing it from any angle while customizing options with Unity Forma.”

From 2D images to 3D models

By integrating the 2D creative canvas of screen space with a shared 3D universe, canVERSE propels companies to reach their customers and engage more with their products.

Arksen has created a range of explorer vessels, designed to safely travel to some of the most wild and precious places on the planet. Directly from the Arksen CAD data, canVERSE was able to create a real-time 3D fully configurable model of the Arksen 85 vessel with Unity Forma.

A sleek workflow for a slick finish

Each Arksen is customizable to the client’s needs, so canVERSE created a workflow that can ingest multiple CAD models. The workflow consists of five stages:

It all starts with the CAD model, which is built in Rhinoceros 3D and exported as a 3DM file by the Arksen team.

It also allows the team to deploy numerous features to fix any technical issues, apply materials, and finesse the model in preparation to be imported into Unity Forma.

Stage 3: Converting physical materials into digital ones with Unity ArtEngine

To take advantage of having a vessel’s construction in progress, canVERSE created a digital library of materials by taking photographs of the Arksen 85 and feeding them into ArtEngine.

For example, the aluminium sheet pictures from the outside of the vessel were converted into a physically based renderer (PBR) asset.

Our design is continually evolving, and Unity Forma’s native tools provide a workflow that allows canVERSE to update and review changes at an incredible speed.

For the first Arksen 85, the development team created the animations for the boom arms and added a three-state visibility system, while the artists built the coastal scenes. Unity Forma really comes into its own when all the final elements can be manipulated together.

Traditionally, the chief product officer would be directing each of the various developers and artists to polish the final product. This can be a lengthy process of back and forth between team members. However, with Unity Forma, a non-technical specialist can easily adjust cameras, lighting and material variants and test them with ease. This saves a great deal of time and resources internally.

Additionally, the Forma process itself is very efficient, which is essential, as the Arksen model is getting updated continuously. As soon as a new version of the Arksen model is in Unity Forma, it’s possible to update material and visibility variants in a simple drag-and-drop interface using the product configurator.

As the structure of the project is preserved, the existing camera work, animations and environments are retained between product updates. Automation tools such as the product configurators and the material thumbnail generator further speed up this rework. It generates new thumbnails for the Forma user interface in a quick and easy process that saves many hours of work.

Finally, Unity Forma allows all parties – canVERSE, the Arksen team, and Arksen’s client – to try different ideas and spot potential problems in real-time that normally would be found much later. Hence, collaborators are able to build and review together in one cohesive design process.

Jim Mair, technical director, Arksen, says: “Unity Forma lets clients emotionally engage with their Arksen, as they get to see and feel a digital twin of their boat in context, rather than an abstract CAD drawing.”

So, Unity Forma has not only become a vital sales tool, but also part of the design feedback loop that lets the team rapidly prototype in hours instead of days.

Finally, each Unity Forma build is deployed on Furioos, Unity’s cloud-based streaming technology that makes it easy to share complex, interactive 3D applications on web browsers and embed them onto websites. This makes sure the Arksen team and their customers always get to see the latest update, all without the need for a powerful machine. 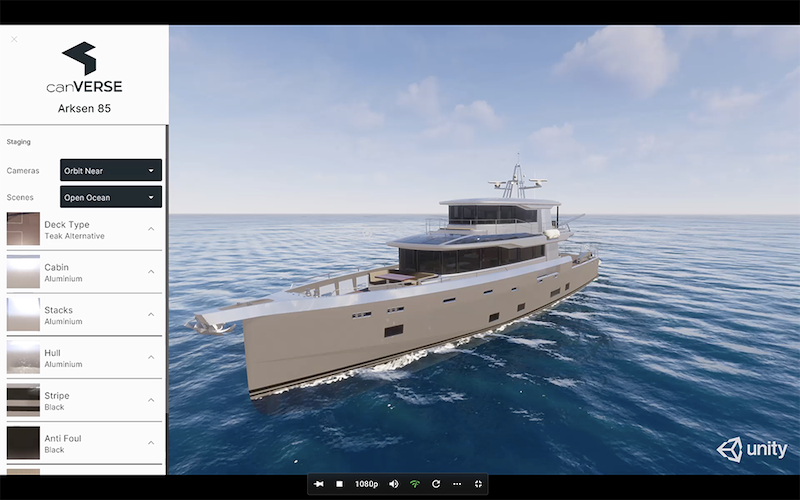 Taking immersion to the next level

Unity Forma allows canVERSE’s workflow to be tried and tested and ultimately to feed back into Arksen’s Rhinoceros 3D CAD model, ready for manufacture.

Now canVERSE are working on several XR configurations, including a tabletop holographic augmented reality version, to take the immersion to the next level.