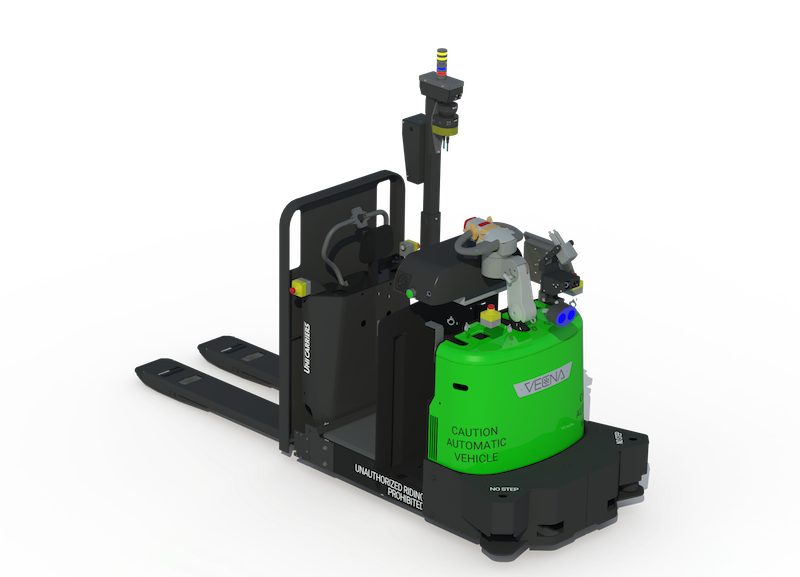 Advances in sensor and camera technologies have made robots more intelligent, allowing them to collaborate more with human workers instead of being isolated in cages or separate areas.

Known as co-bots (collaborative robots), this new form of robot can slow down or stop completely to prevent humans from getting injured, but they also enable companies to develop new human-robot workflows that automate previously manual methods.

In essence, they aim to focus on the “collaborative” aspect of the term, rather than the “robot”.

Co-bot concepts are starting to break through in the autonomous mobile robot (AMR) space, where advances in lidar and machine vision developed for the self-driving vehicle space are helping to create indoor robots that can help deliver materials autonomously within a warehouse environment.

These robots use their sensors and cameras to avoid obstacles and other workers within a dynamically changing warehouse setting.

Collaborative AMRs have revolutionized many processes within a warehouse, taking previously manual, boring or even potentially dangerous tasks and automating them to create a safer environment.

Examples include autonomous forklifts that can drive pallets from a loading dock to a storage area, or AMRs that act as a delivery cart in an e-commerce fulfillment picking operation.

Many companies are experiencing the tip of the iceberg in the possibilities for collaboration with AMRs and human workers in warehouse and manufacturing environments.

Smaller processes, known as micro-workflows, can easily be automated with co-bots, and often with the same equipment.

For example, a company that deploys an autonomous forklift to handle the dock-to-stock process (where pallets are unloaded from a truck and moved to a storage area) can also use those robots to handle the delivery of finished pallets (in a factory) or completed orders (in an e-commerce warehouse) to the shipping side of the warehouse.

Similarly, AMRs that are used to help pick items for e-commerce fulfillment can also be re-utilized to help with replenishment operations or to automate the movement of returns (either back to storage shelves or delivery to a third-party recycling or refurbishing location).

The good news for operations looking to deploy such automation in their operations is that co-bots are generally less expensive than traditional industrial robots or automated guided vehicles that require a heavy capital outlay.

Several robot companies and systems integrators offer robots-as-a-service business models that let companies deploy robots using operating expenses rather than capital expenses, a big plus for companies looking to deploy the technology rapidly and scale with their operations.

In addition, robot developers in both the AMR space and co-bot arm world continue to make improvements to their systems that increase the speed of the robots themselves while maintaining safety protocols that keep human workers from getting injured.

As camera, lidar and machine vision technologies advance, robot systems will continue to improve as well.

The good news is that there are a ton of workflows within a warehouse or factory environment, from large-scale picking to micro-workflows like returning pick carts from packout, that are ready to become more collaborative by combining the best of humans with the best of robots.

In fact, studies have shown that collaborative robotic workflows can be more productive than when humans and robots work independently of each other.

When starting their automation journey, many companies immediately jump to a lights-out vision. However, the reality is that co-bot solutions are often more accessible, faster to implement, and faster to provide an ROI, all while boosting the productivity and engagement of your staff.

The key is to focus on where automation can provide benefit and to remember that co-bots are an effective and valuable tool in the toolkit when applied to the right workflows.

Republished with permission from Vecna Robotics