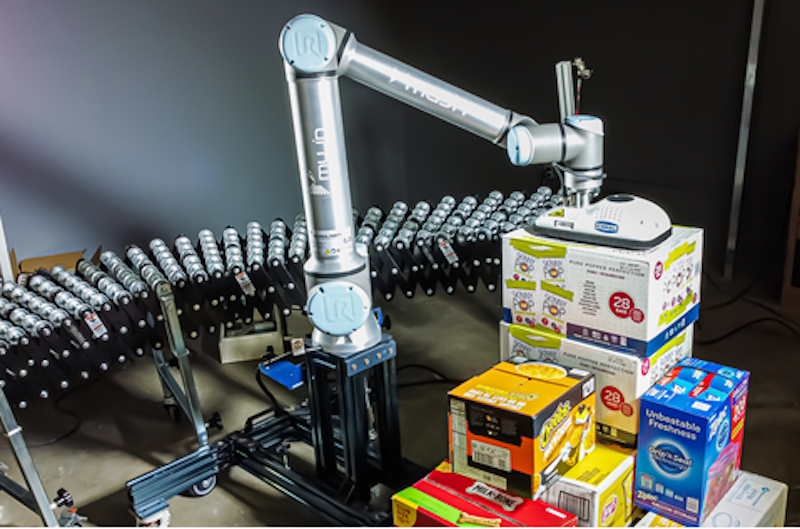 1 trillion dollars. That’s the astounding figure US e-commerce will reach in 2022, up 16 percent from 2021, according to Insider Intelligence forecasts, prompting warehousing labor wages to increase four times faster than before the pandemic.

“But despite wage increases, logistics operations are still having a very hard time hiring and retaining frontline workers,” says Joe Campbell, senior manager of applications development with Universal Robots (UR).

“To fill that void, we’re now experiencing significant industry demand for robotic piece-picking and palletizing processes that support a wide range of products,” explains Campbell, who speaks on the topic in his “Piece Talk” presentation The Labor Challenge in Manufacturing Just Won’t Go Away on April 28 at 11:00am ET at partner RightHand Robotics’ booth #B8622 at MODEX 2022, taking place in Atlanta, GA, April 28-31.

At RightHand Robotics’ booth, Universal Robots’ UR5e cobot will power the RightPick 3 robot system, that offers system integrators and warehouse operators an item-handling solution for use with AutoStore, ASRS systems, and other standard material handling automation.

Both the hardware platform and the RightPick AI software stack have been re-architected for easier configuration of sources and destinations and workflows, greater performance exceeding 1,200 units per hour in controlled tests, process reliability better than 99.5 percent, safety and compliance.

“We continue to work closely with the team at Universal Robots. These past two years have stressed the supply chain everywhere, but UR has been a reliable and responsive supplier to us at RightHand,” says Vince Martinelli, Head of Product and Marketing at RightHand Robotics, “which has been critical to us as we scale our business.”

At UR’s own MODEX booth #B2805, visitors will experience how palletizing, one of the most ergonomically unfriendly and labor demanding tasks, is handled by UR cobots in several innovative applications; one of them developed by UR partner Mujin, showcasing a UR10e cobot in mixed-case depalletizing:

“UR brings flexibility, ease-of-use and ready-to-deploy tools making it simple for manufacturers to automate nearly any repetitive task. Together with UR, Mujin brings these same benefits to the warehouse,” he says, explaining how Mujin’s advanced 3D vision and real-time motion planning technologies can automate the deployment of difficult applications like mixed-case handling, sorting, and order filling.

For palletizing applications requiring a heavier-payload cobot, the UR booth will also feature the UR16e model with a 16 kg/35.3 lbs payload, palletizing and de-palletizing in a conveyor setting, featuring UR’s own built-in palletizing programming wizard in seamless integration with the FXCB gripper from Schmalz.

The gripper is part of UR’s rapidly expanding UR+ ecosystem of third-party component and application kits certified to be plug-and-play with UR cobots, now encompassing 387 different products.

“There has never been a more crucial time for the supply chain industry to embrace automation,” says Joe Campbell. “We look forward to these conversations at MODEX, illustrating with hands-on examples and ROI justifications how cobots will help address the pain points.”

UR cobots will also be exhibited in the following MODEX booths: