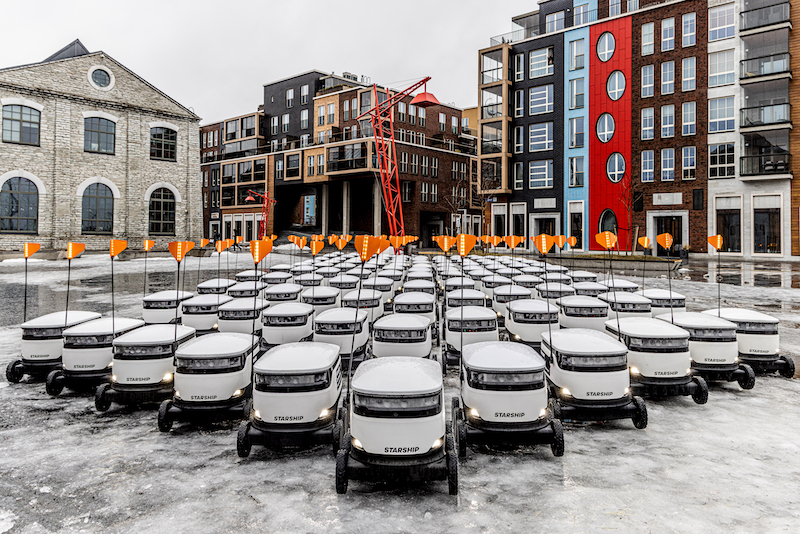 Starship Technologies, a provider of autonomous delivery services, has raised $100 million in the last 30 days, including a new $42 million Series B funding round.

The Series B funding will help Starship further scale its service and meet increasing demand for its autonomous delivery service by launching in tens of new cities and campuses, including Pleasanton in the Bay Area as well as University of Tennessee, Knoxville and University of Idaho.

Some of this funding is immediately going to support people by donating directly to the Red Cross in Ukraine, says Starship.

Starship tripled deliveries in 2021 and is continuing to gain momentum as the entire autonomous delivery industry expands. The size of the autonomous delivery robot market is expected to reach $55 billion by 2026 with an annual growth rate of 20.4 percent, according to Facts & Factors.

Some of Starship’s recent achievements include:

Shinichi Nikkuni, managing partner of NordicNinja VC, says: “Everyone is talking about how to fix the issues with last mile delivery.

“Time and again, Starship has proven itself to be years ahead of others with world leading autonomous driving technology for sidewalk delivery, leading to accumulating more and more data and experiences through much wider commercial operations.

“There aren’t many companies that have a truly autonomous service that has earned so much customer loyalty and adoration. We think Starship has found the right formula for success on a global scale and are excited to be part of their future journey.”

Sten Tamkivi, investing with Taavet Hinrikus through their Taavet+Sten partnership, says: “We have always been committed backers of the engineering ingenuity budding from the Estonian tech scene, and Starship takes this literally further than anyone: to the millions of miles around the planet these robots have already covered.

“And many hundreds of millions more, as they have passed the crucial milestone making robot delivery more cost effective than human equivalents.”

Nicolas Sauvage, TDK Ventures president, says: “TDK Ventures is so proud of the rapid growth and success Starship has accomplished in a few short years

“Our pride runs deep, as they were the very first investment we made. We use the term ‘king of the hill’ for startups that we feel are at the top of a small emerging market, and in our estimation are poised to become world leaders in massive markets within five to 10 years. Starship was our first king of the hill.

“With #1 industry positions today in a variety of metrics – number of paid deliveries, of autonomous robots, of kilometers driven, data and more – Starship continues to trailblaze the way. We are excited to be part of their journey and join this new funding round.”

Alastair Westgarth, CEO of Starship Technologies, says: “The autonomous delivery market has been gaining momentum the past couple of years and we think it will really take off this year.

“The demand for Starship’s services continues to rapidly increase and we are regularly contacted by more college campuses and cities that want our services, often because they hear about the great results that Starship is already delivering.

“I’m impressed with every member of our team who believes in what we are doing and has helped us hit yet another milestone of three million commercial deliveries. I also appreciate the investors who trust our vision and who are helping us get to the next phase of our journey.“

Ahti Heinla, co-founder and CTO of Starship Technologies, says: “We know this industry inside out, because we invented it.

“So many unexpected things have happened to get us where we are today but I think we can all agree that on-demand services are mainstream and not going away anytime soon.

“While other companies in this space are busy making claims, we are gladly very busy making thousands of autonomous deliveries every day and improving the efficiency of our service.”

The Starship Food Delivery app is available for download on iOS and Android. To get started, customers choose from a range of their favorite food or drink items, then drop a pin where they want their delivery to be sent.

Starship Technologies operates commercially on a daily basis around the world. Its zero-emission robots make more than 100,000 road crossings every day and have completed 3 million commercial deliveries and travelled more than 3 million miles (5 million+ kms) globally, more than any other autonomous delivery provider.