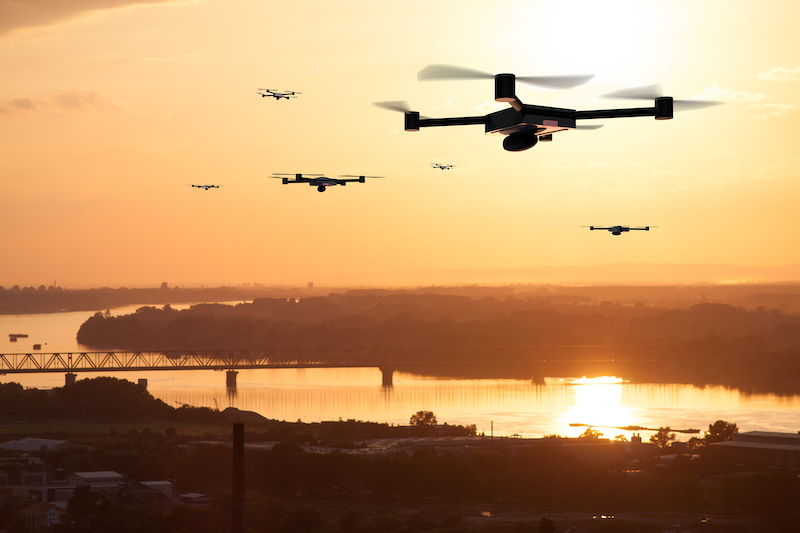 Researchers at the Technology Innovation Institute in the UAE are developing a new paradigm for teaching robot swarms how to allocate themselves to tasks efficiently.

The ideas – published in the paper, Group-Size Regulation in Self-organized Aggregation in Robot Swarms – could spark interest in better ways of controlling lots of simple robots to do more complicated tasks independently, with little or no outside communication.

Much prior work has been done to organizing swarms of drones to perform impressive tasks, such as a coordinated light show. But these approaches often relied on centralized coordination, expensive equipment in each drone, or both.

The TII researchers are exploring different ways to scale a swarm using a mass of simple robots working in concert with a few smarter ones.

The main idea is that this kind of approach would allow swarms to continue operating in constrained environments, such as deep underground, behind enemy lines, or in outer space. TII senior researcher Eliseo Ferrante envisions more futurizing scenarios such as controlling augmented natural cells as robotic components.

Ferrante says: “When we push down the limits of sensing and communication required, these types of applications may become practical even at the nanoscale.”

This could open opportunities for creating fleets of nano-drones that kill cancer, repair tissue, or heal disease with limited outside connectivity.

Ferrante says: “I wanted to spark a discussion on how we can improve collective behavior and collective task management.”

The hope is that these basic principles could be tweaked for larger-scale tasks that require scalable swarms. The key idea is to design the ensemble in which a small group of robots could solve the task through collaboration in a way so that there is virtually no limit in the number of robots solving the task, and this can scale up or down at any point.

Ferrante’s interest in the mathematical properties of swarms goes back to his wonder at what allowed birds to flock and bees to swarm. Over the years, similar fascination drove researchers to establish a whole hybrid theoretical and experimental field for characterizing collective behavior.

This science helps explain how individuals paying attention to a few minor properties about the others can lead to coordinated activity, such as the perfect triangle of a flock of birds.

Other scientists have been exploring how to control multiple robot swarms that efficiently propagate complexity to all the robots. But these approaches are often not very scalable because each robot requires complex sensors, and external networking infrastructures and computers.

Ferrante says: “We are proposing a way to merge these two approaches to robotics.”

One avenue of research has focused on pairing down multi-robot systems by adding one constraint at a time. This could include cutting out the network, reducing the sensing capabilities, or limiting the computation.

Ferrante says: “Others have removed only few constraints at a given time. Here we removed everything at once to see what we could do.”

In this framework, at one extreme, the robots are taught to make decisions based on what is best with respect to some quality of the environment, such as the amount of food or light. The robots are not aware that they are solving a collective problem.

The researchers were trying to figure out how to get the robots to solve smaller problems that collectively added to a global task. A different challenge is to make a collective decision that minimizes costs like energy or travel distance.

In this research, researchers included a few informed individuals with greater knowledge of the environment that can guide collective decision-making in a particular direction. Previous research explored how to get robots to aggregate in one place. This happens when ants are attracted to a big pile of food by a trail of pheromones from other ants.

Nanomedical robots might encourage more robots to work on a bigger tumor with a few splitting off to work on the smaller one.

Ferrante’s intuition told him they needed to create a feedback mechanism to maintain the appropriate balance.

The future is hybrid

Ferrante hopes that researchers from other fields like physics and biology will continue working together to investigate some of these hybrid mechanisms.

Ferrante says: “I am convinced that physicists already know the solution to very similar problems. That is why we want to work with more complex systems researchers.”

Up until now, the bulk of research has focused on either task-driven generic robots or artificial swarms. He believes that a hybrid approach composed of a few smart individuals can help bridge the experience of both these fields to build better robot swarms.

His team is also investigating ways to bridge research into the cultural evolution of language with robots. This could lead to new approaches for dynamically evolving the controller on each robot to improve collective action over time.

This mirrors the way new words have helped grow the use of the Internet or in others cultural contexts. Down the road, this could lead to larger and more sophisticated aggregates of robot swarms in which the collective gets smarter over time.