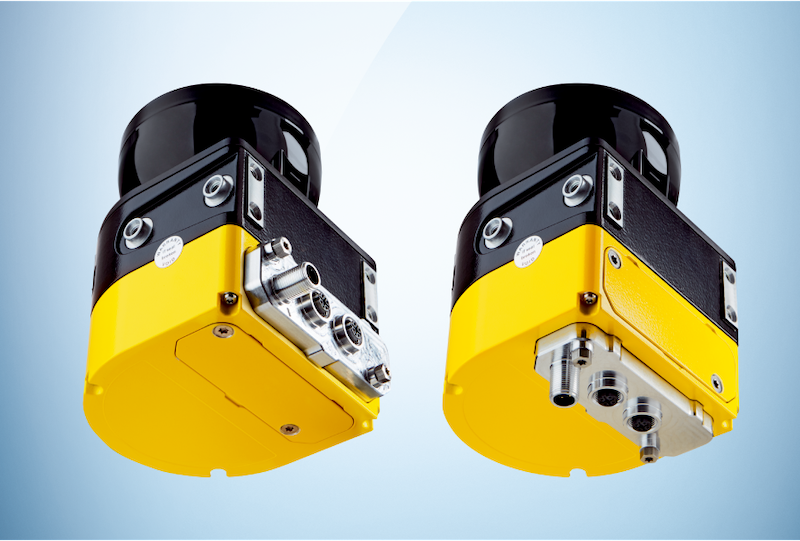 Universal I/O integration works with any safety controls, and the intelligent host/guest functionality makes it possible to connect up to three guest scanners to the microScan3 Pro I/O.

Additionally, the microScan3 Pro I/O does the work of four standard safety laser scanners with an industry-leading four pairs of OSSD outputs.

It also stands out in the microScan3 portfolio with two encoder inputs directly in the safety laser scanner for speed-based case switching.

The addition of I/O connectivity with Ethernet makes for the best of both worlds; the I/O provides universal and versatile use while Ethernet allows for full digitalization functions, like configuration, diagnostics, and measurement data.

As for the direct encoder inputs, the encoders tell the scanner what speed the vehicle is going; when it’s going faster, the scanner can look out further to detect any obstacles. As the vehicle slows down, it can bring the protective fields in closer to reduce the chance of false trips.

Furthermore, the connection of four pairs of OSSDs means that three pairs can initiate the slowing down of the vehicle while the remaining pair initiates the stopping of the vehicle.

This is just one of many combinations in which the four OSSDs can be used, however, no matter the number of outputs designated to the different movements of the vehicle, the ability to slow down, stop, and go maximizes flexibility and productivity, as opposed to just having the ability to just stop and go.

Lastly, having an Ethernet connection on board provides a central access point for configuration and diagnostics of multiple scanners. It also provides measurement data that can enable localization and navigation.

Industrial robot applications across the automotive industry also benefit from the scanner’s four pairs of OSSDs. With the Pro I/O variant, up to four of the simultaneously monitored fields can have their own dedicated safety output, helping to increase productivity because of the ability to incrementally slow down a robot rather than just stop or go.

Regarding stationary applications, the combination of an industry-leading nine-meter protective field range and four pairs of OSSDs allows you to safeguard adjacent machines.

If you have two robots working side by side, you could have one microScan3 Pro I/O in between them and divide the four pairs of OSSDs between the two.

When a worker approaches a robot, only that robot would slow down and/or stop, allowing the other to continue working so as not to completely halt operations and productivity.