NTT, the national telecommunications provider of Japan and one of the largest such companies in the world, is training industrial robots to become data center workers.

The company has a separate business division for data centers called Global Data Centers and says its global platform is “one of the largest in the world”.

Its data centers tend to be huge facilities and are “expensive to run”, mostly because of the massive amount of electricity necessary and the cooling infrastructure, not to mention the sheer floor space required.

In order to continuously optimize operations and provide the highest levels of client service, operators of such large data centers are looking to automate processes through robotics. 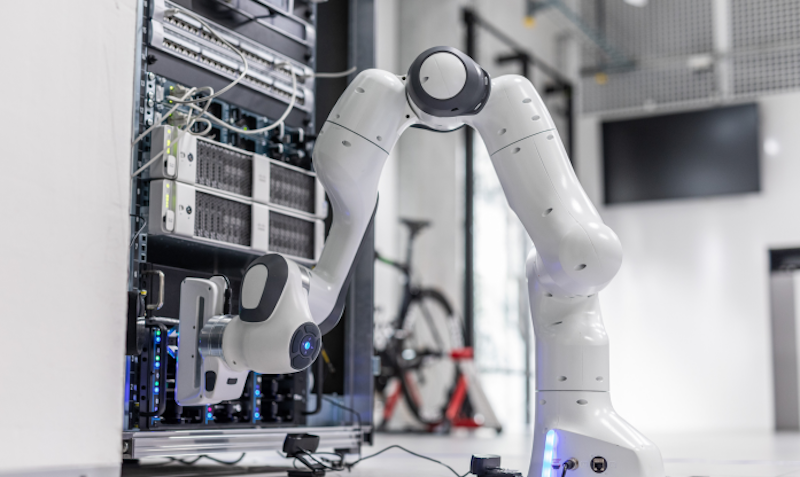 Those 10 partner companies include:

On its website, NTT says: “In our pilot project, robots are being trained to take on central tasks in the data center autonomously and reliably.”

NTT Global Data Centers has produced a white paper that we downloaded and had a quick read through.

The main testing of the robot is being done at NTT’s Farnkfurt data center – or rather, the Technology Experience Lab in Frankfurt am Main – where it is “used regularly”.

The key technology at the moment is the integrated machine learning algorithms.

NTT says: “The robot system is always adding new information to its existing knowledge base. The system now exchanges hardware from different manufacturers, patches cables, and documents all changes in a transparent and unalterable format.

“The robot-based service Smart Hands is expected to make further progress towards maturity in collaboration with several pilot clients.”

In a video produced by the company, the robot is seen removing one hard disk from a server unit and replacing it with another. This task is called “hot swapping”.

Hot swapping is one of the most common applications. In this application, hardware components are replaced or added without shutting down the actual system.

The robot recognizes the components of the respective rack using computer vision and carries out the required actions on the hard drives, power supply units, or similar components autonomously.

Patching cables as a means of connecting various components is a further classic application that can be automated with a robot.

Once the hardware has been removed, a new process starts to insert the replacement component. A number of safety functions are also active, which prevent damage in the event of an unforeseeable error or an incorrectly calculated movement.

In order to record the environment, cameras are installed on the front of the rack and the robot, which effectively constitute the eyes of the robot.

In addition, two Bosch sensors installed in the rack provide information on the temperature, humidity, light intensity, and pressure.

NTT adds: “Relevant technology areas that use the data, and do so in a technically sophisticated manner, are machine learning, deep learning, and robotics, including the sub-areas of computer vision and reinforcement learning.”