The Winter Olympics – or Beijing 2022 – are under way in China, and the country’s roboticists are using it as an opportunity to show off their technologies.

This is not unexpected, of course. Japan used the Summer Olympics to showcase its engineering prowess in the area of vehicle technologies as well as robots.

We would have expected to at least see an autonomous snow-clearing vehicle, but nothing like that has been seen. On the contrary, there have been reports of snow-making machines being used to augment the natural snow that may or may not been available to use.

Beijing is said to be the first Winter Olympics venue to be using mostly or almost entirely artificial snow. One could argue that the fact that there’s not enough snow at the location should have exempted it as a location for hosting the Games. 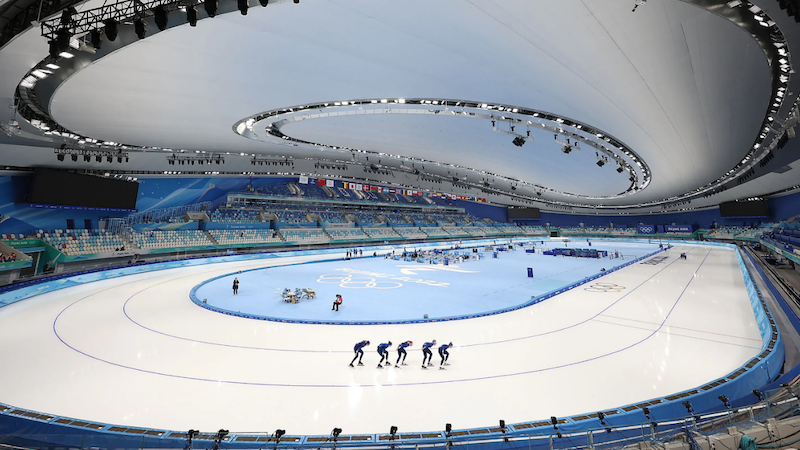 Now having ever gone skiing on any kind of surface, we’re not sure what differences there are being artificial and natural snow. But it stands to reason that if an athlete is accustomed to practising on artificial snow, it’s like they will have an advantage over participants who are used to natural snow.

But anyway, that’s the human sports people, the athletes, who are highly tuned to their equipment and the surfaces they ski on. We’re interested in robots.

One of the most noteworthy robots to have been seen at Beijing is described as a “robot skiing insect”, although to us it looks more than a canine, in the style of Boston Dynamics’ robot dog.

The robot has six legs, which explains the “insect” tag, but the middle two legs are kind of difficult to see – they’re tiny, and done make contact with the surface while skiing. Not that we could observe from the video (below) anyway.

Nonetheless, it looks like a fun robot to watch and is certainly a great technical achievement by the Chinese researchers who developed and built it.

According to China Daily, the six-limbed robot can attain a speed of “more than 36 kilometers per hour over 400 meters on an 18-degree snow track”.

Gao Feng, a mechanical engineering professor who led the team, said the project started in March and was supported by the Ministry of Science and Technology.

China Daily quotes Gao as saying: “This is the first ski robot in China.”

The robot features “many breakthroughs” in its key algorithms and can plan its own ski route using technologies such as intelligent perception and braking control. It can be remotely controlled by people up to 2 kilometers away.

The main module of the robot, housing its battery, motor and torque sensors, weighs 1.2 to 1.3 kilograms. Visual and radar sensing units and 5G communication modules were installed on the top of the robot, according to the website.

Gao said: “Robots that move on wheels can do well on paved roads but cannot cope with complicated environments, such as in mountainous areas and on the moon’s surface, and that’s where legged robots will have wide application.”

Other robots showcased at Beijing 2022 include food dispensing robots, waiter robots and cleaning robot. While these may have been largely dismissed as being “gimmicky” in the past, the global pandemic has put a different perspective on such robots because they minimise contact being humans, which, in turn, minimises the risk of spreading disease.