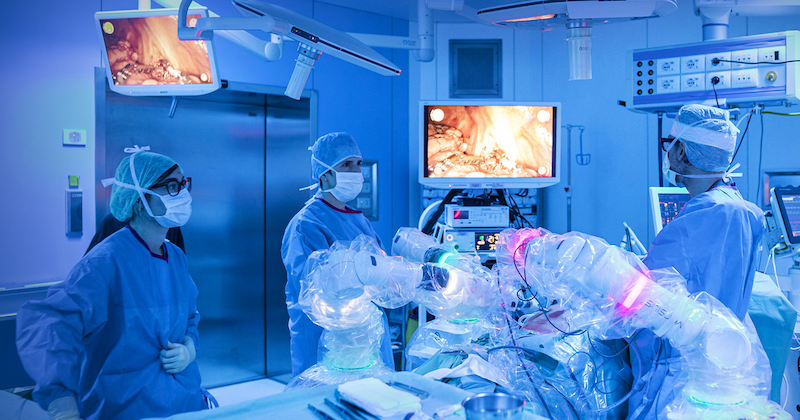 CMR Surgical says its Versius Surgical Robotic System has been “indicated” for thoracics to support surgeons providing minimally invasive surgery to patients undergoing operations in the lungs, thymus and oesophagus.

In medicine, an “indication” is a valid reason to use a certain test, medication, procedure, or surgery.

Following a gradual introduction with specific case and procedure selection, Versius has now been used in both major and minor cases including oesophagomyotomies, lobectomies and thymectomies.

Through small incisions near the patients’ ribs, thoracic surgeons can work precisely and accurately in the chest cavity with Versius, benefitting from its small fully wristed instruments and 3D HD vision.

The first site globally to begin a clinical programme with Versius in thoracics was Klinikum Chemnitz – a leading hospital in Saxony – which began the programme in early 2021.

Sven Seifert, chief physician of the clinic for thoracic, vascular and endovascular surgery at Klinikum Chemnitz, says: “Thoracic surgeons have been waiting for quite some time for a system like this that can work with us in a patient’s stiff ribcage.

“Versius allows surgeons to operate on hard to reach areas with its wristed instruments, while sparing the patient’s chest wall.

“We were the first hospital in the world to use Versius for thoracics and are excited to now be working with international experts to pioneer the use of Versius in the speciality.”

In addition to Klinikum Chemnitz, Versius is also being used for thoracic procedures at a number of leading public and teaching hospitals around the world including Argenteuil Hospital in France, Policilinico di Milano in Italy, Galaxy Care and Manavata Hospital in India, as well as Macquarie University Hospital in Australia.

Patrick Bagan, thoracic and vascular surgeon and head of department, Argenteuil Hospital, says: “We are extremely pleased with the enhanced visualisation Versius offers, which means that we can be more precise.

“We have now done a number of successful cases on the system including mediastinal procedures, thymectomies and pulmonary resections for cancer.”

Joel Dunning, consultant thoracic surgeon at James Cook University Hospital and Versius preceptor, says: “In thoracic surgery, the robotic approach is evolving rapidly and within five years it will be the predominant way that all lung cancer surgery is performed.

“I am delighted to have personally seen many thoracic robotic operations using the Versius system. It has small instruments, which we believe minimises the post-operative pain caused when operating through the ribcage.

“The system itself is small and more portable than other systems which means that it can fit into practically any operating room.”

Versius has been introduced into thoracic surgery in line with CMR Surgical’s collaboration with the “IDEAL” framework which provides an international benchmark for each stage of the surgical innovation process, including clinical trials and post-market surveillance.

Mark Slack, Chief Medical Officer at CMR Surgical, says: “This is a hugely important milestone for Versius as we continue on our mission to make the benefits of minimal access surgery available for more patients around the world.

“Patients undergoing major surgeries for cases including lung cancer need to have the highest standard of care and we believe minimally invasive surgery, enabled by robotic technology, is the answer.

“We have followed the IDEAL framework to introduce Versius safely and responsibly into the specialty alongside leading surgeons in the field and are delighted to see it is proving it is well-suited for the complex needs of thoracic surgeons.”