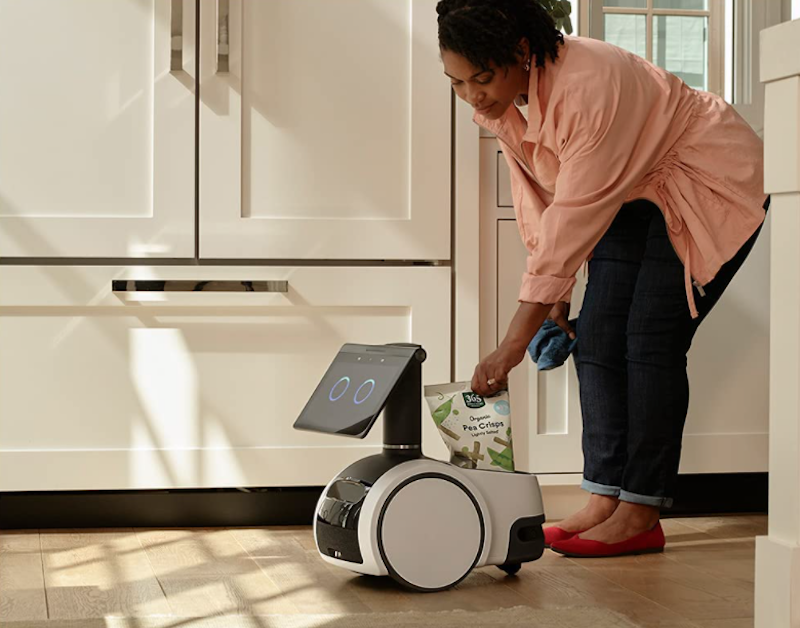 Amazon has launched a small, humanoid-ish security robot for the home, called Astro, although it’s currently only available “exclusively by invitation”, whatever that means.

The online retail giant, which probably operates the largest fleet of autonomous warehouse robots in the world, says Astro is a “household robot for home monitoring”.

On its website, Amazon adds: “When you’re away, use the Astro app to see a live view of your home, check in on specific rooms and viewpoints, and get activity alerts.

“When you’re home, Astro can follow you from room to room playing your favorite music, podcasts or shows, and find you to deliver calls, reminders, alarms, and timers set with Alexa.”

Alexa is Amazon’s smart home device – it’s a talking artificial intelligent stationary robot, if you can call it that.

Integrating the two devices makes sense obviously, especially as Alexa can also monitor many aspects of a home’s operation – lighting, heating and so on.

However, as yet, no single company has emerged as a leader in the home mobile robot market, even though it is said to be quite significant in size.

According to a report by Market Research Future, the global market for household robots was worth more than $3 billion in 2018, and is set for more than 15 percent annual growth until 2025.

However, that report mainly considers robot vacuum cleaners and lawnmowers, not so much home monitoring robots like Astro.

The security robots market, which could be said to include Astro, overlaps the home segment as well as the business secor, where it’s used to patrol empty buildings in the evenings, for example.

While these like sizeable markets, there are a good number of companies with security or monitoring robots in the market.

The recent acquisition of Misty Robotics by Furhat Robotics suggests this is a market that is set for a period of consolidation.

And given that Amazon wouldn’t have to dig too deep into its pockets for the money to acquire all the leading companies in the sector in one fiscal year, it will be interesting to see how things develop.

However, until these robots can water my plants while I’m away on holiday and actually feed my pets rather than merely show me pictures of them while I sun myself on Pandemic Beach, Coronawai’i, the mass market will continue to elude them.

I can overlook the fact that none of them can climb stairs if they can do either one of those things. Being able to carry small items from one place to another is useful, but these robots need more abilities.