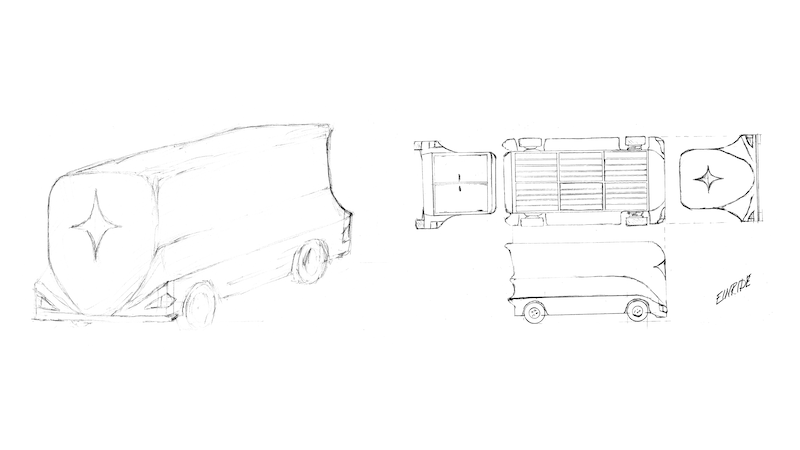 The Pod, an all-electric, totally autonomous vehicle, was first debuted in 2016 and Einride has since delivered on its promise to reduce carbon emissions for customers by more than 90 percent compared with traditional diesel freight vehicles.

The auction of Einride’s Pod NFT took place on December 14 with a starting price of $2,016 and was available to bidders on OpenSea, an industry platform for the buying and selling of NFTs.

It was the first in a series of NFTs that the company plans to release over time. Einride also plans to hire a crypto strategist, a newly developed role for the company to effectively tap into the immense potential of continuing to innovate in a “web 3.0 world”.

The recent adoption of blockchain technology to the logistics industry makes room for major efficiency gains to be had, showcasing opportunities for its capabilities to be integrated into current and future shipping strategies.

This sketch of the Einride Pod was the first time Robert Falck, founder and CEO, officially documented on paper his vision for the future of freight. Stemming from Falck’s technical engineering background, he drew design inspiration from both the physical appearance and sturdiness from the American Bison and the futuristic promise of hope inspired by popular science-fiction film franchises.

Since then, the Pod became the first autonomous vehicle to operate on a public road, broke a speed record at the Top Gear track, and racked up numerous accolades both in design and technology, most recently being named a top invention of 2021.

Today’s Pod has undergone a number of iterations as Einride continues to “define what the future of shipping will look like”, with the most recent, modular design being unveiled as part of Einride’s official launch into the US market.

Einride has chose to run its auction using Polygon’s Matic, which utilizes proof-of-stake, as opposed to proof-of-work consensus.

Proof-of-stake is a greener alternative to the Bitcoin and Ethereum proof-of-work algorithm, which requires much more hardware to mine, making the use of Matic 99 percent more energy-efficient than proof-of-work.