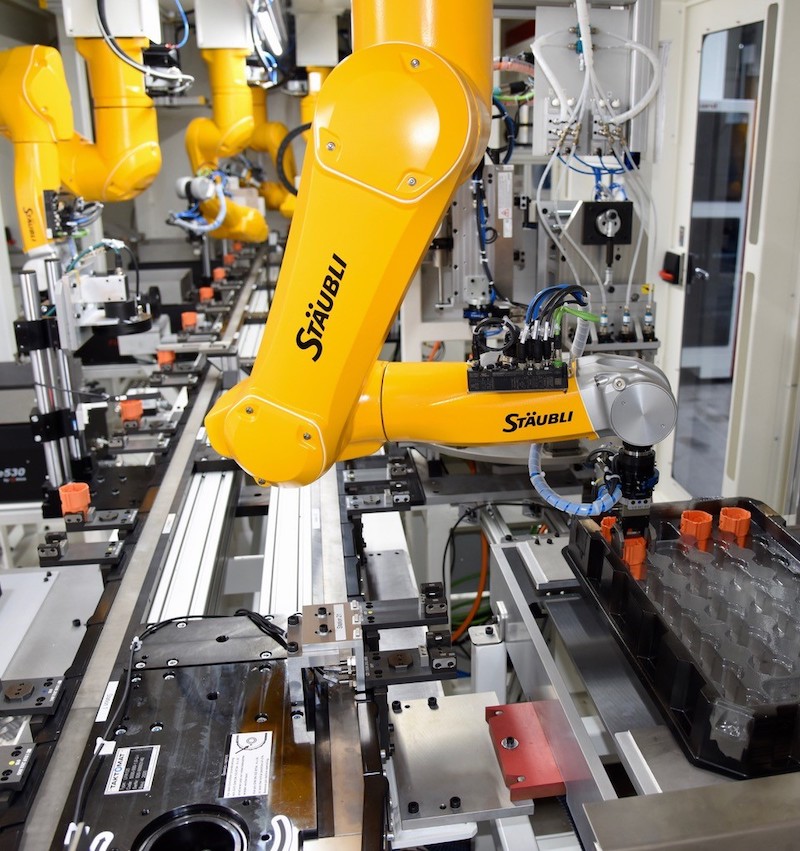 Assembling high-voltage connectors for electric and hybrid vehicles at a rate of 5 million per year calls for sophisticated automation solutions. Especially when regular retooling for new models and variants is the norm. Against this background, a pioneering system with six Stäubli robots, 13 image processing systems and inline quality control at every stage is now ensuring highly flexible production.

Electro-mobility is the buzzword of our times, and the market for vehicles with electric drives is steadily gaining momentum worldwide. For some time now, this trend has also been spurring demand for the type of assembly solutions for electric components offered by specialized machine builders such as Eberhard. The company, based in Schlierbach near Stuttgart, Germany, was recently asked by a multinational automotive supplier to implement a complex project.

As Abdullah Kotan, project planning and application team leader at Eberhard, explains: “The special features of the project included the target output of 5,000,0000 units per year, a short cycle time of no more than three seconds per connector, and a future-proof system design to accommodate a large number of possible connector variants. Given these requirements, it quickly became clear that the only possible solution would include robots, an image processing system and a highly flexible feed system.”

Founded in 1964 and now employing 320 people, Eberhard has extensive experience in the field of PCB assembly and connector production. Because customized automation and assembly solutions are among the company’s core competencies, management was firmly convinced that, in collaboration with the right partners, they could take the project through to a successful conclusion. The design team has indeed hit the jackpot with the recently completed assembly line, ultimately destined for installation in Mexico, as was abundantly clear during a demonstration tour. 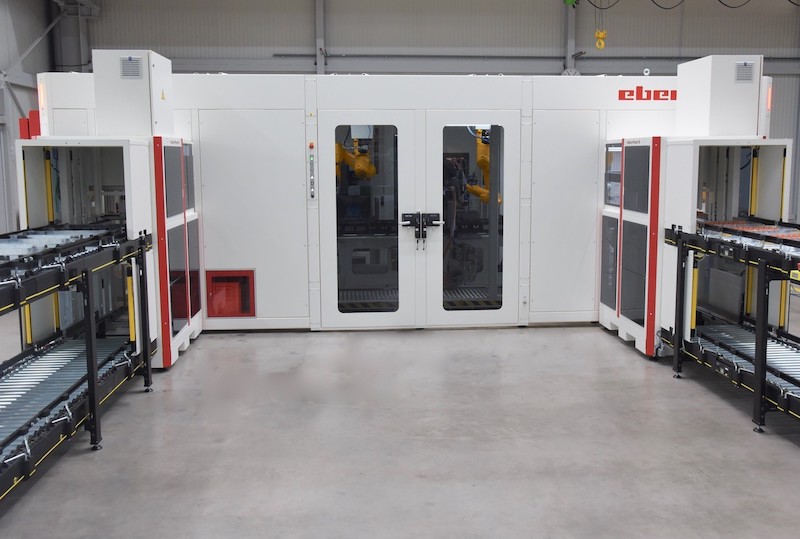 At first glance, there is one question that immediately springs to mind: How did the designers manage to squeeze a 13-station assembly line with six robots and 13 vision systems into such a tight space? A closer inspection provides the answer: Not a single centimeter of space is wasted, yet accessibility to almost all stations is provided in an exemplary manner. The inspired decision to suspend the six six-axis robots above the stations makes an especially significant contribution to spatial efficiency.

All six robots are the super-fast and highly precise Stäubli TX2-60L six-axis model, which has an extended reach of 920 millimeters. Despite being ceiling mounted, they still deliver their full performance with a repeat accuracy of ± 0.03 mm.

“We chose the robots not only because of their dynamics, but also because of their compact design, their interfaces to the feeders and cameras, and not least, their legendary reliability,” says Kotan. “We have to guarantee our customer a total system availability of more than 95 percent and can therefore only use first-class components.”

Four of the six robots are equipped with camera systems, which enable them to pick up parts from vibration platforms. These ultra-flexible feeding systems are a regular feature of the assembly lines designed and built by Eberhard, because they ensure that hardly any mechanical adjustments are necessary when changing from one variant to another. Whenever a new variant comes along, it is usually sufficient to teach the system by means of image processing.

Assembly and testing in unison

The assembly of the connectors follows a clear pattern, with each work step being followed by a quality inspection. Take Station 1, for example: Here, the first TX2-60L equipped with conveyor tracking picks up a connector housing from a constantly running feed belt and places it in a workpiece carrier, where it remains while passing through all of the other stations in the system. At Station 2, an optical quality check is carried out, during which coding and color are noted.

The same principle applies at the next two stations. The second Stäubli six-axis machine uses the positional data from a vision system to pick up a connector lock from a vibration platform and mount it on the connector housing. Here, too, Eberhard applies instant QA, with the image processor focusing on the twin criteria of defect detection and assembly position.

The same principle applies as the connector housing passes through all subsequent stations. Before it leaves the assembly line, there are three more steps, in the course of which the ultra-fast Stäubli six-axis machines fit a seal, a frame, and the complete connector interior. Downstream, the customary inline quality checks are carried out after each station.

Before the completely assembled high-voltage connector is transferred by the last of the six Stäubli robots to the Eberhard proprietary PTS 64 palletizing system, it is tested for leak-proof construction. In order to maintain the cycle time here and avoid a potential bottleneck, Eberhard has installed a rotary indexing table with four stations and a quadruple test fixture. 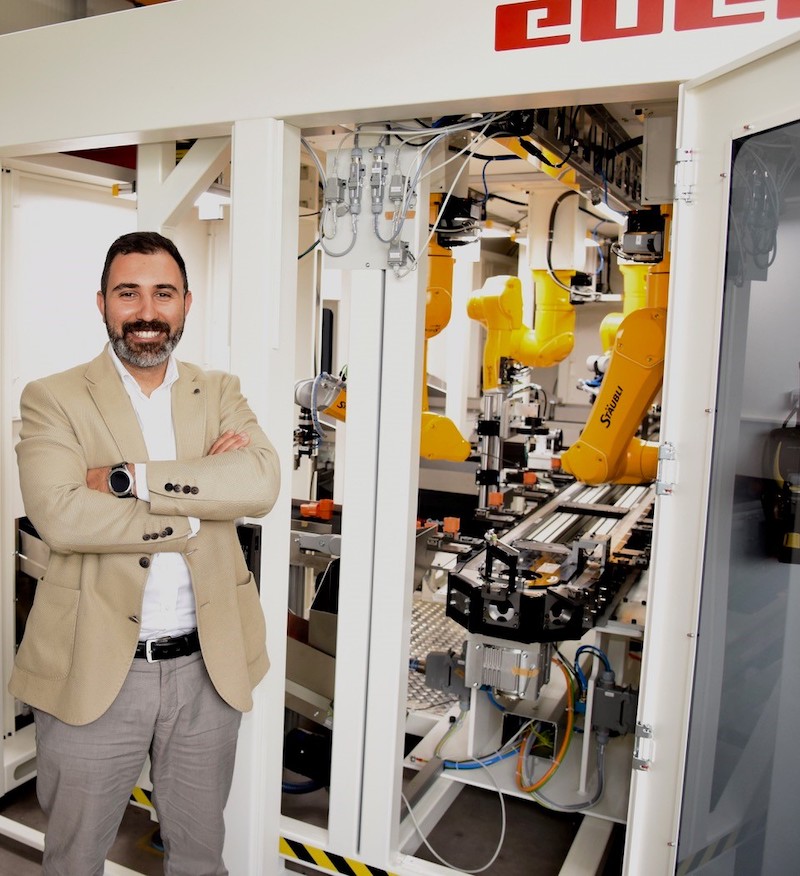 At this initial stage, the system is handling no more than three variants, but this number is expected to increase significantly in the near future. The assembly line’s highly flexible design means the client should have no problems in this regard.

Although the system is currently producing only three variants, changeovers are scheduled once or twice a day. “Our customer runs shortish batches, and therefore the changeover must be completed within the shortest possible time. From the last unit of one batch to the first of the next, the changeover is completed within 10 minutes,” Kotan explains.

Already during the pre-commissioning of the assembly line, the target cycle time of three seconds has been undercut. Currently, the cycle time of the system is around 2.7 seconds per high-voltage connector, which corresponds precisely to the prior simulation carried out in collaboration with Stäubli Robotics. The fact that the result of the simulation corresponds 100 percent with reality underlines how closely processes can be simulated today – provided the right tools are used.

Kotan says: “We are sure that we will be able to further optimize minor details of the system when it is eventually installed at the customer’s production facility in Mexico and boost output by a few percentage points. If we succeed in reducing the cycle time by 12 to 14 percent, that would indeed be a remarkable result in the context of an annual production volume of five million connectors.”