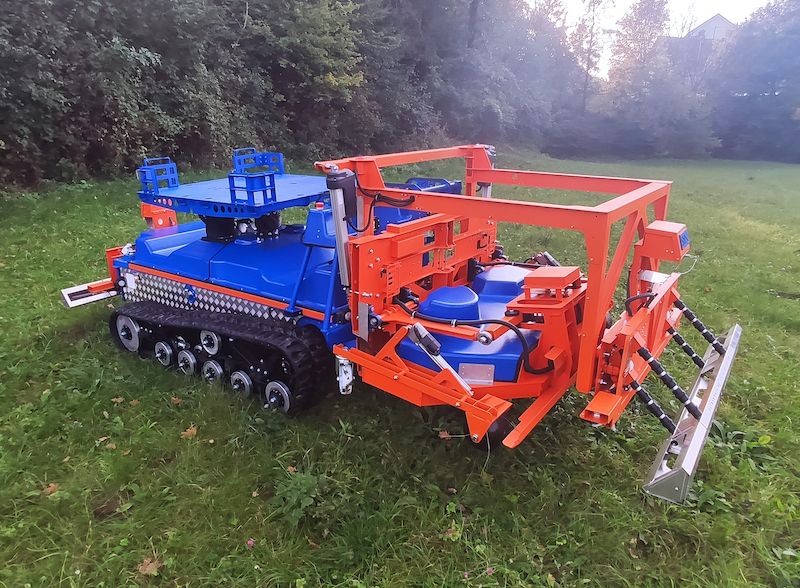 A company called PeK Automotive has developed a robot it calls “Slopehelper” and says it is ready to help out in vineyards and orchards.

The autonomous agricultural electric robot Slopehelper is being developed and produced in the European Union.

Its creators say the solar-powered robot promises the “absolutely green future” of agriculture to vineyards and orchards at low cost, having made it possible to perform regular annual operations without a driver in fully autonomous mode.

Slopehelper performs most of the routine operations on a plantation, such as mowing, mulching, spraying, harrowing, and cutting – all in fully autonomous mode and without a driver or operator involved.

All that is needed from a farmer is to bring the charged vehicle to the plantation – if it has not been charged right on a plantation from a photovoltaic module – put it at the beginning of the first row, insert the number of the rows and the type of the operation to be performed and launch the operation.

The Slopehelper will be doing all the work autonomously for up to 14 hours and will inform the farmer about the end via TeroAir mobile application.

The same TeroAir application allows the farmer to control all the operations that are being performed, as well as the current position of the robot, its speed, weather conditions, and even the current move via an online video camera.

The Slopehelper was developed by a core team of engineers that recently relocated to Slovenia from Russia. The experience they brought with them made it possible to build and test a unique autonomous vehicle in an unrivalled period of less than two years.

The producing company PeK Automotive has already launched the mass production of the first 16 Slopehelpers for the first customers in Slovenia. The further expansion will include the bordering countries like Italy and Austria, as well as France, Spain, Hungary, Serbia, and Bulgaria.

Dr Mikhail Kostkin, the director and mastermind of the project, is sure the Slopehelper brings the future of agriculture to the present day.

Kostkin says: “We have not just developed a robot, we have developed a complex system that covers every aspect of a farmer’s everyday hard labor. This system includes navigation, hinged equipment, mapping, and many other things.”