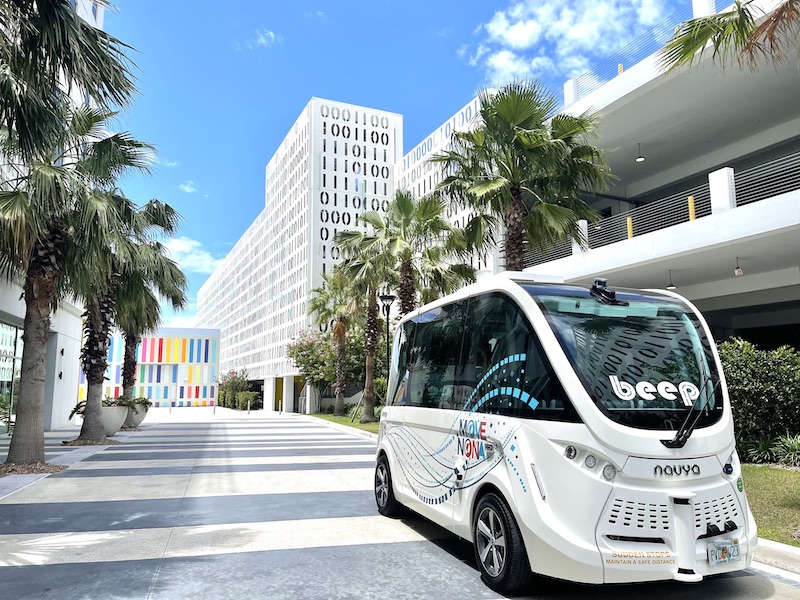 Peachtree Corners – a tiny city in Georgia, US – is partnering with T- Mobile to launch a fleet of Beep autonomous shuttles, as well as cellular vehicle-to-everything, or C-V2X.

The advanced autonomous service has been named “PAUL” – short for Piloting Autonomous Use Locally. Peachtree Corners has dubbed an area of the city “Silicon Orchard”.

The new technologies to be developed leveraging T-Mobile 5G C-V2X infrastructure, vehicle data and collaboration with other Curiosity Lab companies.

Peachtree Corners says it is one of the nation’s first smart city environments powered by real-world connected infrastructure and T-Mobile 5G, adding that PAUL (Piloting Autonomous Use Locally) will be available for residents this Fall.

The service, implemented by Beep, a developer of multi-passenger, electric, autonomous mobility solutions, will operate along Technology Parkway and will include stops at popular destinations in the area such as hotels, restaurants, retail shops, the Innovation Center at Curiosity Lab at Peachtree Corners and City Hall.

Brian Johnson, city manager of Peachtree Corners, says: “From the beginning, we’ve made it our mission to create the city street of the future in the most differentiated smart city environment in North America – and with Beep launching the new PAUL autonomous shuttle service, we’re continuing to break new ground.

“This deployment not only allows for the continued development and deployment of safe, enjoyable and eco-friendly transportation options – but it also allows a true mobility-as-a-service pioneer like Beep to leverage our city-owned V2X infrastructure and vibrant ecosystem to help accelerate new technology development that further enhances safety and earns critical trust from the public.”

Joe Moye, CEO of Beep, says: “We’re delighted to join the Peachtree Corners community and further advance real-world autonomous mobility in one of the most unique smart city ecosystems in the world.

“With our turnkey approach, integrating deeply with residents and first responders, the city will immediately benefit from our experience in having run the largest and most tenured autonomous service in the country in Florida, as well as unique deployments like Yellowstone National Park.

“In addition, we’re excited to leverage the city’s advanced cellular-V2X technology, 5G and more smart city infrastructure to enable deeper learnings, to analyze vehicle data and to develop new proprietary technologies that advance true Level 4 and 5 autonomous service in the real world – while also working with government to help evolve policy and regulation alongside the technology.”

With C-V2X solutions now a reality in Peachtree Corners, the importance of advanced 5G – with low latency, high bandwidth and high-speed connectivity critical for real-time reaction between sensors, machines and people – is taking center stage.

Beep’s autonomous shuttles are connected on T-Mobile’s 5G network. Each shuttle is equipped with a 5G gateway to power telematics data and enable interaction with 5G connected infrastructure along the Integrated Transportation Systems (ITS) corridor.

Dave Bezzant, vice president, T-Mobile for Government, says: “The vision of 5G powering the city street of the future is happening now at Peachtree Corners where people, vehicles and infrastructure all communicate with each other to elevate safety and improve everyday life.

In addition, OVHcloud, a leading global cloud provider, will deliver compute, storage and other cloud platform resources, which will allow the city and select technology partners to manage, analyze, gain critical insights and make informed decisions from the massive amounts of data generated from the autonomous vehicles and sensors across connected infrastructure.

PAUL: the future of autonomous service in Silicon Orchard

The shuttles will operate from 10 am to 4pm daily beginning this Fall – and will include seven total stops on the “Technology Parkway – Curiosity Lab” route.

Additional routes, which may extend to other areas of the city, will be announced at later dates.

Unlike other autonomous vehicles across the country, PAUL is a reflection of the future of true Level 4 and 5 autonomy – employing various emerging technologies connected over T-Mobile’s 5G network such as intersections with video analytics to provide real time data, cameras in the shuttles, Roadside Units (RSU) and Onboard Units (OBU) that advance autonomous vehicle operation in real-world environments.

Beep says it “cuts through the industry noise” and recognizes the importance of continuous human oversight necessary to close the gap that currently exists with today’s autonomous vehicle platforms.

The company’s Beep Command Center (BCC) capabilities add a critical layer of safety, allowing staff to intervene and react to emergency situations. In addition, the city’s first responder organizations are all intensely trained and prepared to support PAUL operations daily.

C-V2X Technology + Government and Business Collaboration: Peachtree Corners’ vibrant smart city ecosystem includes city-owned cellular-V2X infrastructure that allows vehicles, traffic lights, roadside fixtures, buildings, pedestrians and more to communicate with each other to ensure that autonomous shuttles are more aware of their surroundings and can react to various conditions.

Beep’s deep experience in managing the largest and most tenured autonomous shuttle service, coupled with its proven track record in operating vehicles on public roads, uniquely positions the company as a leader in the development of real-world autonomous solutions and software.

The PAUL deployment is another reflection of Beep’s ability to plan, manage and deploy autonomous solutions in unique environments.