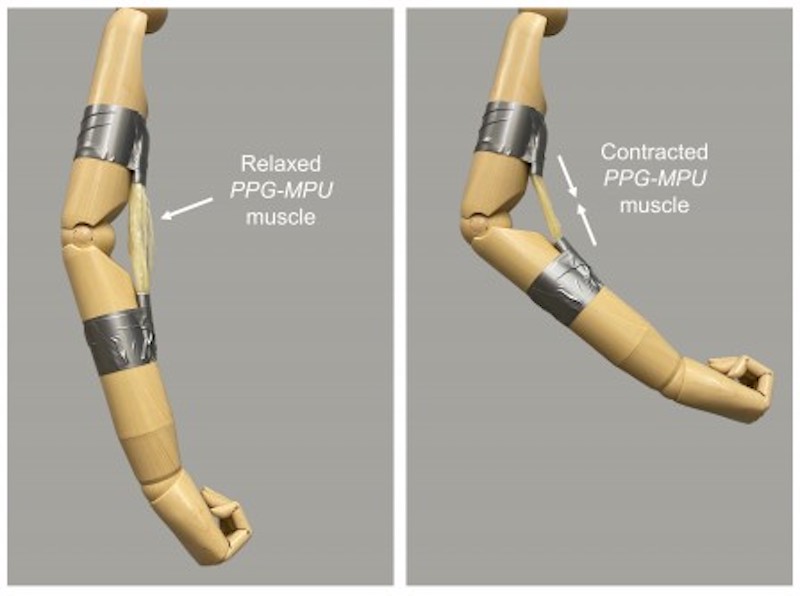 A high-energy shape memory polymer could someday enable robots to “flex their muscles”, according its developers.

When stretched or deformed, shape memory polymers return to their original shapes after heat or light is applied.

These materials show great promise for soft robotics, smart biomedical devices and deployable space structures, but until now they haven’t been able to store enough energy.

The deformed state is created by stretching the polymer and is held in place by molecular changes, such as dynamic bonding networks or strain-induced crystallization, that are reversed with heat or light.

The polymer then returns to its original state through the release of stored entropic energy. But it’s been challenging for scientists to make these polymers perform energy-intensive tasks.

Zhenan Bao and colleagues wanted to develop a new type of shape memory polymer that stretches into a stable, highly elongated state, allowing it to release large amounts of energy when returning to its original state.

In the polymer’s original state, polymer chains were tangled and disordered. Stretching caused the chains to align and form hydrogen bonds between urea groups, creating supermolecular structures that stabilized the highly elongated state. Heating caused the bonds to break and the polymer to contract to its initial, disordered state.

In tests, the polymer could be stretched up to five times its original length and store up to 17.9 J/g energy – almost six times more energy than previous shape memory polymers.

The team demonstrated that the stretched material could use this energy to lift objects 5,000 times its own weight upon heating.

They also made an artificial muscle by attaching the pre-stretched polymer to the upper and lower arm of a wooden mannequin.

When heated, the material contracted, causing the mannequin to bend its arm at the elbow.

In addition to its record-high energy density, the shape memory polymer is also inexpensive (raw materials cost about $11 per lb) and easy to make, the researchers say.

Main image: An artificial muscle made of a stretched shape memory polymer contracts upon heating, bending a mannequin’s arm.