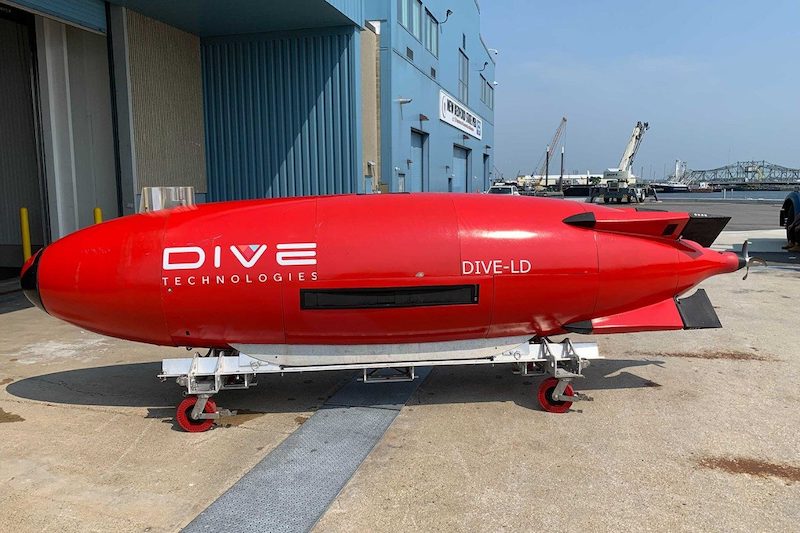 Almost two years ago, Dive Technologies, a subsea robotics designer and manufacturer based in Boston, began a multiyear partnership with researchers and students at the Center for Marine Autonomy and Robotics to develop a novel commercial autonomous underwater vehicle.

In April 2021, Dive Technologies delivered the DIVE-LD to market, a design they see as the most capable large-displacement autonomous underwater vehicle, in terms of the reliability, endurance, and navigational accuracy it brings to global commercial and defense customers.

With the first round of sea trials of their craft complete, the DIVE-LD’s performance has already exceeded expectations, but the team behind the self-propelled, unmanned, untethered underwater vehicle is driven to take it even further. They’re now back in the lab, working diligently to refine the vehicle’s software systems and optimize hydrodynamic performance.

Virginia Tech ocean engineering researchers and students have supported the mission of Dive Technologies through development and testing of the vehicle’s innovative hydrodynamic design, control, and autonomy subsystems, and a complete software framework for fully autonomous subsea operation.

Through this project, students from across the College of Engineering have received unique exposure to industrial applications of their research.

The collaborative partnership was fostered through Link + License + Launch at Virginia Tech and is helping to move state-of-the-art technology from academic labs into next-generation commercial applications.

This approach creates value on both sides, providing opportunities to further commercialize, manufacture, and scale innovations while ensuring that technologies developed at the university deliver societal and economic impact.

During the first two years of the partnership, the Center for Marine Autonomy and Robotics developed an optimized hydrodynamic design, including a novel shape of the hull; performed resistance and self-propulsion calculations; and explored optimum geometry and positioning of the propeller in the wake of the hull to minimize the overall propulsion power in the given operational speed profile.

Unlike conventional autonomous underwater vehicles, which have a parallel mid-body (or a cylindrical body with curvatures at each end like a torpedo), the DIVE-LD boasts a novel design that is shaped like a horizontal teardrop, resulting in less drag.

Simultaneously, the team has developed control and guidance algorithms based on one of the most accurate numerical maneuvering models, integrated in a complete software framework and a graphical user-interface that an operator uses to program a mission.

The team conducted sea trials of the DIVE-LD in the waters of Cape Cod Bay and Buzzards Bay, an hour south of Boston. Throughout August to December 2020, Dive Technologies ran more than 250 missions and put a significant number of hours on the test vehicle.

Due to the global Covid-19 pandemic, Stilwell, Brizzolara, and their students were unable to travel to the sites for offshore testing. Both groups stayed connected throughout the trials through email, virtual meetings, and the occasional offshore phone call in order to quickly analyze test results and make rapid corrections along the way.

According to Sam Russo, chief strategy officer for Dive Technologies, the team had forecasted at least six months of vehicle testing, with the DIVE-LD being a new vehicle class and product offering.

“Realistically, testing should have taken us well into 2021 in order to fully refine the vehicle controller and hit our stability requirements,” Russo said. “This was not the case, and it’s largely credited to our exemplary team and partnership with Virginia Tech. The Virginia Tech vehicle controller was essentially working right out of the box.”

In fact, the vehicle performed better than the team anticipated.

“We assumed months of control loop tuning and down time for the DIVE-LD, but the model had us running with very stable platform control within the first month,” Russo said.

“We were able to show stability data to sensor providers that often takes many months or more to achieve for a new commercial vehicle offering. Furthermore, it’s credit to Virginia Tech, Dive’s overall system design, and Dive’s proprietary casualty monitoring and emergency logic failsafe that we experienced zero mission aborts during sea trials, a true testament to the engineering rigor behind the design of the DIVE-LD.”

Back in the lab

Back at Virginia Tech, Brizzolara and his students celebrated the initial success of their hydrodynamic design for the vehicle – then quickly got back to work. According to Brizzolara, a benefit to partnerships with industry is the invaluable feedback these collaborators provide, as the team is using the data from the sea trials for further refinement of the numerical models and theoretical ideas.

“Our rigorous numerical models for maneuvering are among the most sophisticated around, based on high-fidelity RANS simulations of the actual maneuvers of the vehicle that correlated very well with the actual behavior in the field,” said Brizzolara.

“Our team will continue to work on the accuracy of the vehicle’s maneuvering capabilities and further improve power consumption based on a unique propulsion system that has not been investigated before.”

The new arrangement of the propulsion system is aimed at producing less noise and using 20 percent less power than a conventional open propeller.

This parameter plays on the interaction of the propeller with the effective wake of the hull to achieve a higher, more efficient performance.

According to Brizzolara, this approach has never been used in autonomous underwater vehicles. Instead of utilizing a single monolithic hull, the design is configured for a hollow shaped hull fitted with an innerduct, inside which the propulsion system fits.

The result of this novel configuration is that the vehicle uses less power, enabling it to cover longer distances and extended ranges during missions.

Though the hydrodynamic design of the hull proved to be stable and performed well at sea, the unconventional shape presented new maneuvering challenges. The team is now exploring the use of marine tunnel thrusters inside the hull, based on a patent he holds with his father, Enrico Brizzolara.

Meanwhile, Stilwell and his team of graduate students are continuing their work with the control and autonomy subsystems, implementing more complex autonomous mission capabilities.

They expect to soon address new operational modes such as hovering and station keeping, in which the vehicle holds its position in order to take accurate measurements or manipulate a subsea object during a mission. Additionally, the unique ducted arrangement will assist in hovering capabilities of the vehicle.

The industry-based project requires her to be focused on the project deliverables by day, while her evenings are spent writing her dissertation.

Many Ph.D. candidates are laser-focused on one particular area in their research, diving in deep and chipping away at a specific real-world problem. On this project, Miller has been able to simultaneously tackle a number of novel problems and see the product through from the concept stage all the way to testing in the sea.

“Here, the process is shortened,” Miller said. “Theories learned in class are immediately put into the project in real-time. With the project on a tight timeline, we are forced to make practical decisions. I have to be efficient, practical, and novel, which has been challenging in a three-pronged way.”

As the lead graduate student on Brizzolara’s team, Miller has been working in collaboration with a number of students who are also studying hydrodynamics of autonomous underwater vehicles. She brings a unique perspective to the project, as she completed her bachelor and master’s degrees and then spent five years in industry.

At Cummins Emissions Solutions, she became familiar with the process of seeing a project through from concept to execution phases, including testing, technical presentations, and team building.

“This kind of practical professional experience, combined with the specialized education she has had in terms of numerical hydrodynamics for ship design, has proven to be extremely beneficial to our research group and our partners,” said Brizzolara.

“She can address complicated design challenges and problems that the Dive Technologies team has come up with and deliver results in a short period of time with a lot of efficiency.”

Throughout the final year of the project, the Center for Marine Autonomy and Robotics will further calibrate their high-fidelity simulation models and continue to optimize the vehicle’s maneuvering abilities.

The team will categorize the vehicle’s dynamic behavior during missions, specifically how tightly the vehicle can turn, and at varying angles or speeds.

Since the DIVE-LD performed well throughout sea trials in overall seakeeping and its stability during missions, the Dive Technologies team has been able to move forward with integrating sensors, such as a synthetic aperture sonar.

There are plans to integrate an acoustic payload to map the ocean floor at 6000-meter depth. Also in production are the next two models of DIVE-LDs that are slated for sea trials in the summer of 2021.