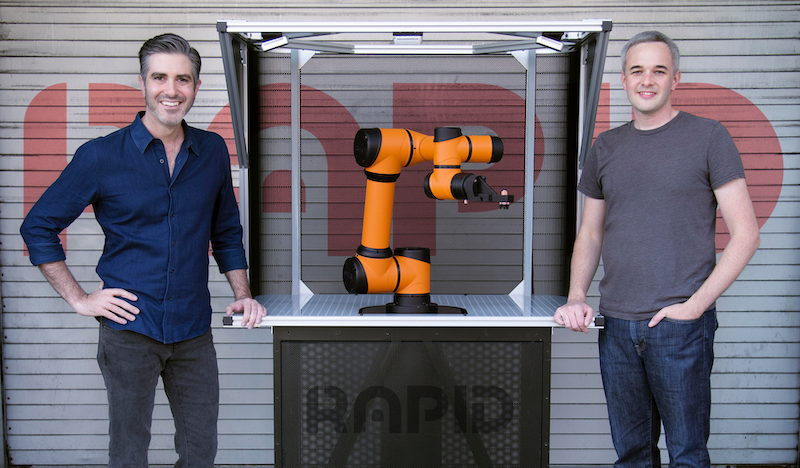 Rapid Robotics, creator of what it says is “the first ready-to-work robotic machine operator”, has raised $36.7 million in Series B funding.

The funding round was led by Kleiner Perkins and Tiger Global, with existing investors NEA, Greycroft, Bee Partners and 468 Capital also participating.

The latest round is Rapid’s third in less than a year, bringing its total funding to $54.2 million.

Since emerging from stealth in late 2020, Rapid Robotics says it has quickly established itself as a “must-take meeting” for American manufacturers, as they grapple with a crippling labor shortage that Covid-19 turned into a full-blown crisis.

According to a recent study from Deloitte and The Manufacturing Institute, by the end of 2020 the manufacturing industry had regained only 63 percent of jobs lost during the pandemic, even with job openings at near-record levels.

In a statement accompanying the study, Paul Wellener, Deloitte vice chairman and US industrial products and construction leader, says: “Given the foundational role the manufacturing sector plays in our nation’s economy, it is deeply concerning that at a time when jobs are in such high demand nationwide, the number of vacant entry-level manufacturing positions continues to grow.”

Most of these open positions are for machine operators, the employees who work the machines that mold, stamp and assemble components for every product we buy. Without operators, these simple plastic and glass parts cannot be made. Without those components, entire factories sit idle.

Jordan Kretchmer, CEO of Rapid Robotics, says: “We hear a lot about the semiconductor shortage, but that’s just the tip of the iceberg. Contract manufacturers can’t produce gaskets, vials, labels – you name it. I’ve seen cases where the inability to produce a single piece of U-shaped black plastic brought an entire auto line to a halt.”

Rapid’s solution is the Rapid Machine Operator (RMO), the world’s first cobot specially designed and priced for machine operation. Previous robotics solutions were too expensive for machine-tending tasks. Between hardware, software, integration and maintenance, they wound up costing more than they saved.

The Rapid Robotics RMO, by contrast, arrives trained and ready to perform the most common machine-tending tasks.

Rapid’s RMO comes with all necessary components, including grippers and computer vision, can be put to work in hours (typical robotics solutions take weeks or even months) and can be easily transferred between tasks as needed, no retraining necessary.

With Rapid’s OpEx-friendly subscription model, factories can “hire” an RMO for less than $2,100 per month, a small fraction of the cost of conventional robotics, bringing automation within reach of manufacturers of all sizes.

“But most manufacturing in America is done in smaller factories, which have been deeply challenged by the machine operator shortage. For them, the Rapid Machine Operator provides the additional support they need to thrive.”

Manufacturers appreciate how the Rapid Machine Operator delivers positive ROI from day-one, but the value for regional producers goes far beyond that, said Rapid Robotics Midwest GM Aaron Halonen, an auto-industry veteran with decades of experience in design, engineering and quality control.

Halonen says: “Factories around here are in a tough spot.

“Without a way to work their machines, they can’t bid on jobs. No bidding means no business. No business means no revenue, obviously. But it also means no hiring or upskilling in other positions. It has a ripple effect on the entire economy.”

“I had one factory manager grab me on my way out. He said, ‘You know, we were going to manufacture these parts in Mexico, but with the RMO I think we don’t have to,’” he added.

It’s not just the auto industry either. Manufacturers across America are racing to put Rapid’s RMOs in place. Next-generation healthcare infrastructure company Truepill has hired RMOs at its Hayward, California facility to fill and label prescription vials.

Matthew Alley, head of fulfillment and supply chain at Truepill, says: “At Truepill, we work behind the scenes to help companies build and power more advanced, efficient and automation-driven pharmacies, fulfilling up to 100,000 prescriptions per day and creating customized, white-labeled experiences delivered directly to consumers’ doors.

“Rapid is helping us further scale these fulfillment capabilities by providing RMOs that are easy to set up and integrate seamlessly with our staff.”

Wen Hsieh, general partner at Kleiner Perkins, says: “With the RMO, Rapid Robotics has come up with the right product at the right time.

“Rapid Robotics pinpointed an urgent problem in a multi-billion-dollar industry and solved it in a matter of months. They’ve found the perfect balance of innovation, affordability and ease of implementation and use.”

Kretchmer says: “Since we launched the RMO I’ve been meeting several manufacturers a week, and it’s clear to me that in every part of the country, this industry is ready for a comeback.

“With the RMO, our customers are ramping up, winning deals and hiring staff. Together, we’re bringing back American manufacturing one machine at a time.”