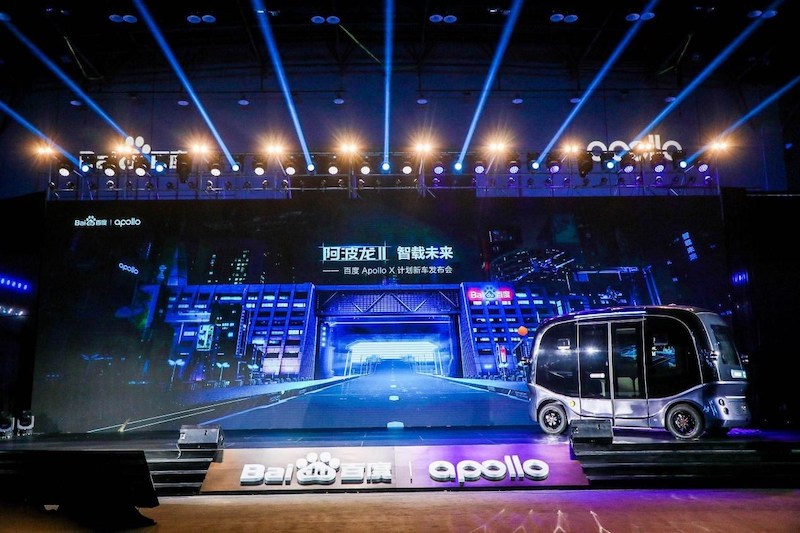 Baidu, the Chinese internet search giant which also has an autonomous vehicle business unit called Apollo, has launched what it describes as “a new generation of multi-purpose autonomous minibuses”.

Named “Apolong II”, the new vehicles are being rolled out in Guangzhou Huangpu District.

In line with these substantial upgrades, the Apolong II can comprehensively meet diversified market demands by providing customizable multi-purpose autonomous vehicle solutions for public transport, mobile policing, healthcare providers and other commercial industry scenarios, marking a milestone in the ongoing evolution of smart transportation for this intelligent era.

Compared to its predecessor, the Apolong II has received sweeping upgrades comprised of 155 capability enhancements that enable Apolong II to operate on open roads as the operational design domain has been expanded.

The computing power of Apolong II has increased three times to 372 Tops.

Its sensor system is enhanced to include two 40-channel LiDAR sensors, which integrate millimeter-wave radars and surround view cameras.

The refined sensor system can now detect up to 250 meters, while positioning accuracy and overall responsivity have reached new levels to be measured in centimeters or milliseconds respectively.

The Apolong II can successfully navigate the complexities of operating on open roads, such as unprotected left turns, lane-switching and crossing traffic scenarios.

The diverse adaptability and extensive applications of the Apolong II multi-purpose autonomous minibus allow it to connect a wide range of traffic scenarios and revolutionize the smart transportation industry.

Its ability to complement other autonomous vehicles or traditional public transport can greatly reduce the walking distance of users, providing a refreshing new take towards solving the last mile problem for citizens.

Apolong II can be repurposed for a magnitude of real-world scenarios by being utilized as public transportation modes, ride-hailing services, scenic tours and more.

With seamless vehicle-road coordination, issues related to smart driving for individual vehicles can be reduced by 54 percent, while emergency braking situations at intersections are reduced by 90 percent.

The 5G cloud-based driving can also enable the autonomous minibus to drive safely and smoothly even under extreme circumstances.

For starters, an intelligent 55-inch transparent window display jointly developed by Baidu and BOE Technology has been installed to visually showcase the road conditions and autonomous driving technologies at work.

Apolong II passengers can also use this HD screen to voice-activate and command its in-vehicle DuerOS assistant, having access to navigation features to explore the surrounding area for dining or entertainment recommendations.

Its spacious smart cabin is designed with a circular seating arrangement and decked out with dome lighting fixtures to provide an innovative yet intimate experience for users.

As the first commercial-grade autonomous electric minibus launched in China, the Apolong series has been in volume production since July 2018.

Having already been deployed in 22 urban parks in Beijing, Guangzhou, Xiong’an, Chongqing, Foshan and more – the first-generation Apolong is the only self-driving minibus to achieve large-scale operations in China, accumulating over 120,000 users and a total mileage of 120,000 kilometers.

The Guangzhou Huangpu District is revered as a benchmark city for new smart transportation infrastructure and stands at the forefront of innovative autonomous driving technology.

Going forward, the Apolong II will fulfil multi-purpose commercialized applications and provide citizens with the ultimate smart transportation experiences by being deployed in public parks, airports, business districts and residential communities in the Huangpu District of Guangzhou.