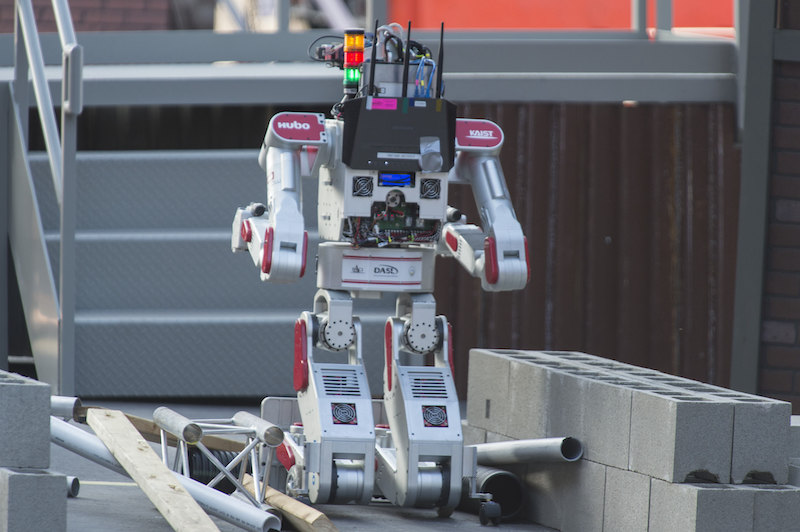 The expansion and acceptance of vehicle autonomy will look a bit different from what futurists had predicted as recently as ten years ago.

People movers such as shuttles and buses are on track to become the first practical and widely accepted application of autonomous vehicles.

Getting to this point has been a long journey following decades of research and development into making autonomous technology safe and successful.

With its expertise in dynamic sensing-related projects and proven track record with Carnegie Mellon University, KVH was the ideal choice, and its sensors performed flawlessly during the race.

While DARPA set out to expedite the research and development of the military use of autonomous ground vehicles in this demanding race, the 2005 DARPA Challenge also highlighted the value, precision, and affordability of KVH sensors.

As a result, KVH FOG technology and FOG-based inertial systems are now a cornerstone of successful and accurate autonomous navigation and stabilization, logging more than one million miles of autonomous driving.

Ten years later, KVH played a critical role in another DARPA autonomy project. The 2015 DARPA Robotics Challenge sought to promote innovation in human-supervised robotic technology for disaster response and to create robots more capable of intervening for and even replacing humans in high-risk situations such as the 2011 Fukushima nuclear accident, earthquakes, natural disasters, and other crises.

Of the 25 finalists, 11 integrated KVH’s 1750 Inertial Measurement Unit (IMU) into the robots’ navigation and stabilization systems, improving their ability to fulfill challenge tasks such as walking up and down stairs, opening a sealed door, driving a vehicle, using a drill, etc.

Among the 11 robots relying upon KVH’s IMU was the winning entry, robot DRC-HUBO by Team Kaist of Daejeon, Republic of Korea.

Using those systems and experience as a foundation, KVH recently developed a breakthrough in FOG technology with its photonic integrated chip (PIC)-based FOG.

FOG technology is based on the Sagnac Effect, which uses light to measure rotation and is known for its precision and stability.

Although incremental advancements had been made over time in fiber quality, diameter, and gyro coil size, major technological breakthroughs in the basic technology were few and far between until 2019, when KVH introduced a FOG-based sensor with PIC Inside.

This groundbreaking design improves reliability and repeatability – qualities essential to accurate autonomous navigation of all types of platforms, from driverless cars to autonomous inventory control robots – and represents a renaissance in FOG technology.

The addition of high-grade accelerometers resulted in further performance improvements in the specs needed for safe and accurate autonomous navigation:

In addition, when GPS/GNSS is unavailable due to terrain or artificial blockages, KVH’s superior photonic FOG-based inertial systems enhance GPS/GNSS by filling in the navigation data gaps until the satellite signals are available once again.

Why MEMS Fail While FOGs Succeed

It’s easy to understand Micro-electro-mechanical systems (MEMS) appeal given their low cost and small size. However, small and cheap can’t mask the challenges MEMS face when asked to deliver the performance and accuracy necessary to reduce safety risks or provide true situational awareness in dynamic conditions.

Unlike FOGs, MEMS are also susceptible to harsh environmental conditions such as vibration, shock, and temperature. FOG-based inertial systems overcome MEMS’ issues and deliver superior performance, leading to improved safety in all operating environments. This factor is especially vital when autonomous platforms are transporting or coming into close contact with humans.

The goal is to verify key performance parameters, environmental resilience, and the overall reliability requirements for the KVH PIC technology portfolio. The testing scope encompasses:

KVH meticulously tests its new PIC technology at both the part and product levels to ensure superior performance, accuracy, and reliability.

Part Level Testing includes over temperature cycling, temperature and humidity, and shock and vibration – all performed over multiple lots of parts to validate the repeatability and robustness of manufacturing.

Product Level Testing covers the complete set of performance specifications and environmental conditions, repeated over time to validate the design.

In addition, the test process also utilizes Telcordia and MIL-STD-810H, both for the optical components and the finished product. KVH validates the design by testing individual PICs and fiber arrays along with complete gyros.

These tests include industry-standard semiconductor temperature and humidity testing as well as shock testing that mimics the actual manufacturing process. In addition, both undergo mechanical shock and vibration testing, mounting and substrate testing, and strength testing.

The availability and interest in autonomous vehicles and platforms continue to increase. However, achieving the promise of autonomous technology will require navigation and stabilization solutions that meet demanding safety, performance, and mass production requirements.

Contact KVH Inertial Navigation Sales for more information on how to get KVH’s reliable, high-performing FOGs and FOG-based inertial systems working in your next project.

Main image: The humanoid robot, HUBO, carried the Olympic torch in the Pyeong Chang Olympics in 2018. This was especially fitting as HUBO was developed by KAIST (Korean Advanced Institute of Science and Technology) and won the DARPA Robotics Challenge thanks to its ability to switch back and forth between walking and wheeling. Onboard was the KVH 1750 IMU which helped HUBO with stabilization and navigation.