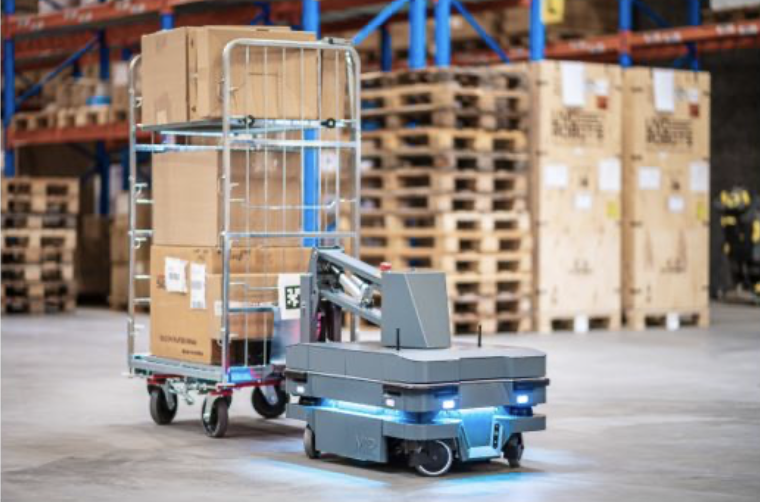 Patented autonomous mobile robot (AMR) solution offers high precision and performance when picking up, transporting and delivering carts with payloads up to 1,100 pounds

Mobile Industrial Robots, a provider of autonomous mobile robots, has launched the MiR250 Hook for automatically collecting and towing carts through dynamic and constricted industrial spaces.

The MiR250 Hook includes the MiR250, MiR’s fastest and most compact AMR, creating a robust user-friendly offering that easily and cost-effectively automates the transport of various sizes of loaded carts weighing up to 1100 pounds (500 kg).

The latest generation of the MiR Hook solution, the patented MiR250 Hook further optimizes internal logistics and other workflows at industrial facilities to increase productivity and profitability and free human workers for higher-value tasks.

“With the highly precise and powerful MiR250 Hook, towing carts and transport cages through dynamic and potentially constricted environments is now easier, more manageable and quite economical.

“There is no need to modify the layout of the facility or purchase new carts, since the MiR250 Hook can autonomously locate and attach to almost any type of cart via QR codes or AprilTags and deliver it to its destination without human involvement.”

The MiR250 Hook safely and efficiently travels at speeds up to 4.5 miles per hour (2 meters/second). The speed, flexibility and robust industrial design of the MiRHook 250 significantly optimizes workflows across industries and increases the range of applications for MiR’s AMRs.

For example, the automated delivery of components by the MiR250 Hook to human workers creates more efficient flow at an assembly line.

“These workers can then spend their time assembling products rather than collecting material and parts,” Nielsen said. “The company also saves space in the production area when carts with components are delivered just in time from stock.”

In addition to the integrated MiR250 Hook robot solution, companies that already own MiR250 robots can separately purchase the MiRHook 250 top module for cart towing, without the need to invest in new carts. Only a few steps are required before deploying the MiR250 Hook in a workplace.

These include attaching QR codes or AprilTags to carts and cages so the MiR250 Hook can identify them; mapping the robot to its route manually the first time or importing a map of the building and premises into the robot’s software, and installing the automatic charging station that lets MiR robots autonomously reload their batteries as needed (if this is the first AMR deployed in the facility).