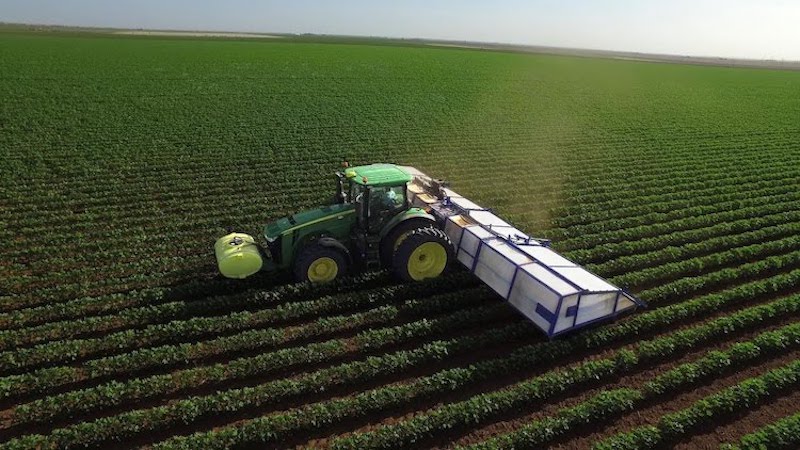 An agricultural robot is a robot, which is developed for doing agriculture works. At present, these robots are mainly used at the harvesting stage. These robots are completely automated and are very helpful in farming which reduces the time and manual workforce in the agricultural works.

The agriculture robot is also capable of soil exploration, weed control, plant seeding, environmental monitoring, cloud seeding, harvesting and many more. These robots are equipped with many tools so that it can do multiple tasks at the same time.

Rise in demand for food supply, increasing population and increasing use of vertical farming are some of the factors which boost the growth of agriculture robot market.

In line with this, there will be a significant rise in the demand for food supply. With the help of robots, the work in the agricultural farms can be done faster and get the cultivated food at a minimum span of time.

Many farmers are opting vertical farming, as it need less amount of water and also reduce the use of agricultural land.

The cost of the robots is considered to be one of the biggest restraints, restricting the market growth. These robots are very expensive, that they are not affordable by the middle-class and below level farmers. Besides cost, lack of understanding on the operation of these robots will also act as a major factor hampering the market growth.

Drones predicted to have the highest growth rate

These robots help in increasing crop production, and also help in monitoring the growth of the crop. They also help the farmers to optimize the agricultural operation, which will further improve the land efficiency.

Driverless tractor segment was valued at $ 939.0 Million in 2018, and is expected to reach $3,714.3 million by 2026. These vehicles operate without the driver, and are automated in detecting their position, and speed.

They are designed in a way to avoid the obstacles while performing the task. Due to these factors, many countries have adopted the driverless tractor in the farming fields, which helps them to cut their regular wages of the workers.

Dairy management is the most popularly used robotic application in agriculture. This segment generated a revenue of $ 1,146 Million in 2018, and will reach $ 4,492.9 Million by 2026. In Dairy management, the advanced robots are used to take milk from the cows and are also used to graze the agricultural ground.

Harvest management is another application of agricultural robots, and is used in places where the harvested crop is stored. These robots perform operations such as cleaning, cooling, packing and sorting of the harvested farms.

North America will have huge opportunities

North America is expected to dominate the agricultural robot industry throughout the forecast period. There is a presence of large number of farmers, who are adopting the automated farm vehicles in this region.

The North America market is witnessing constant investments in the technological sector, and are progressing in terms of automation.

Moreover, favorable government initiatives in favor of agriculture are consider to be the key driving factor for the North America agricultural robot market. This region generated a revenue of $1,469.8 Million in 2018, and is expected to grow at a CAGR of 18.9 percent.

The Asia-Pacific market is accounted to have the highest agricultural robot market growth rate in the global market. The increased use of automation in the farming sector and favorable government initiatives like subsidies are going to drive the Aisa-Pacific market in the forecast period.

The Asia-Pacific agricultural robot market size is expected to grow at a CAGR of 19.7 percent by generating a revenue of $3,798.3 Million by 2026.

Key players in the global agricultural robot market are: