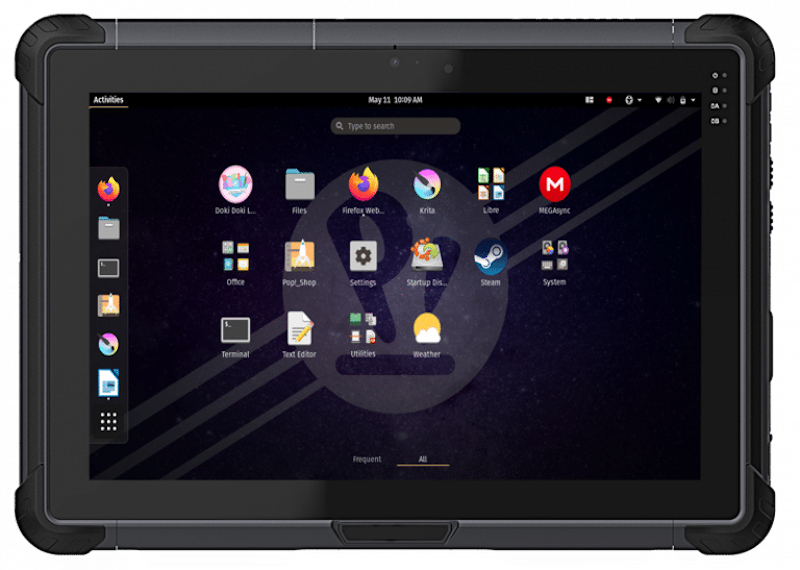 The end of 2020 and beginning of 2021 has shown an uptick in searches and inquiries for tablet PCs and panel PCs with Linux operating systems. The bulk of those searches are for Linux Tablet PCs.

The product lines for Linux panel PC and a tablet with Linux have distinctly different uses. We will explore some of the benefits of Linux by the type of product to identify the cause for the trend.

In a future article, we will explore the industries that are likely to benefit from the use of Linux on a tablet PC or panel PC.

Exploring panel PC related search terms for Linux, we identified that the search for panel pc linux and linux panel pc were have increased. We also noticed an increase in the requests for Linux based panel pc OEM and ODM projects. What are the benefits of Linux on a panel PC that could cause these trends?

Linux has been trending in the industries that leverage industrial panel PCs due to the openness and flexibility of the operating system. Engineers recognized the value of the custom options associated with a Linux distribution for specific use systems. The OS could be developed in a way to maximize a device’s efficiency and security at a cost point that would support widespread deployments.

Another aspect of having a touch panel pc with Linux at the heart of an industrial application is the ability to adapt the OS for future needs and/or apply updates. The open source community continues to develop free OS versions with updated features, tools and applications whereas a proprietary platform such as Windows will eventually reach an end of life which may result in costly upgrades.

Linux also has great cross-platform support allowing it to run on virtually any hardware, including on older or outdated systems. This makes Linux the most ‘future-proof’ OS choice for device manufacturers. According to a 2019 EETimes Embedded Markets Study, Embedded Linux was the number one choice for embedded operating systems.

Examining Linux related tablet PC search trends, we have seen increases in search for linux tablet, install linux on tablet, linux on windows tablet among others. We have also seen requests for rugged tablet PCs with linux increase for ODM and OEM projects. There are a wide range of uses for Linux tablets in a business environment, but could the OS be moving into the consumer realm?

Tablet PCs are part of the mobile PC industry which is a growing and changing industry. The speed of this change is fueling interest/need for a ‘future-proof’ OS. Companies would like to get the most use out of their technology investments without needing to constantly update hardware to support the latest OS. Because of this, a Linux tablet PC is the solution many are turning to.

Linux is a stable and secure OS which can be critical when downtime is not an option. Since Linux is less demanding on hardware requirements, it performs well even on older systems. Industries that have a focus on security and stability are likely to be attracted to a rugged tablet PC running a Linux OS.

The use of a Linux tablet PC and industrial panel PC is beneficial to OEMs as well. In addition to being able to develop Linux installations for specific use applications, a Linux environment also reduces development risk and the time it takes to deploy it to market. It also allows OEMs to differentiate their offerings from standard general use devices and cut down on development expenses and software maintenance.

Estone Technology is a Single Point Solution Provider OEM/ODM, allowing us to manufacture the hardware, software, device management and mobile applications for your solution. The Linux OS allows us to rapidly develop and deploy your solutions while maintaining the product over its life cycle.

Looking at the OS nature of search terms and digging deeper into searches related to “install linux on windows tablet”, we can identify similar search strings with the different distributions of Linux for installation practices on tablets. The expanded use of mobile devices in the business industry and custom build of Linux are likely driving this trend.

Linux has been in use for years in many IoT embedded devices because of its reliability. It has been the OS of choice in a wide range of industries because it can be customized for the desired application of the device it is installed on.

When developing for a company’s unique kiosk or self-service terminal needs, many developers prefer to work with an open source Linux development environment. Linux environments allow designs that are easily secured from outside interference or user abuse by locking out any undesirable functions.

Part of the Linux appeal is its scalability to be a GPOS (General Purpose OS), such as Microsoft Windows, or a RTOS (Real Time OS) like those that run ATMs and kiosks. It can be customized from simple use applications/devices to complex systems like a medical device with life-critical functionality.

By combining OpenEmbedded technologies and methods, Yocto makes developing for IoT, industrial applications and other specific use systems simple, efficient, and quick. Environments for sensors, tools, and I/Os to communicate can be created quickly, and custom user interfaces are possible for any task. By combining Yocto Project development with a panel or tablet PC, a custom user interface can be developed in a very short time.

With all the advantages Linux has to offer, it is no wonder why developers, manufacturers and industry professionals are seeking out Linux-based solutions. Security, custom implementations, cost saving development, reliability and cross platform hardware support are a few of the primary reasons Linux has been trending as a viable solution in a variety of devices, especially tablet and panel PCs.

This article was first published on the Estone Technology blog.