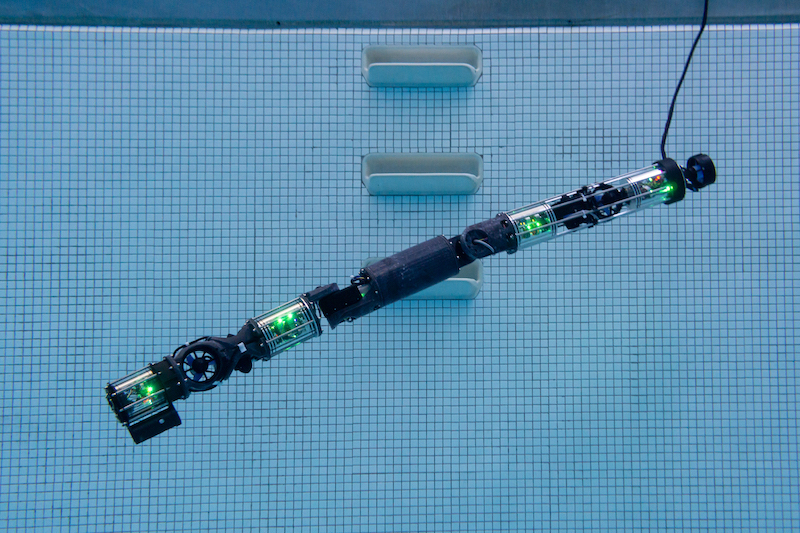 “We can go places that other robots cannot,” said Howie Choset, the Kavčić-Moura Professor of Computer Science. “It can snake around and squeeze into hard-to-reach underwater spaces.”

The project is led by Choset and Matt Travers, co-directors of the Biorobotics Lab.

The submersible robot snake was developed through a grant from the Advanced Robotics for Manufacturing (ARM) Institute. The project aims to assist the Department of Defense with inspecting ships, submarines and other underwater infrastructure for damage or as part of routine maintenance, said Matt Fischer, the program manager at the ARM Institute working on the project. 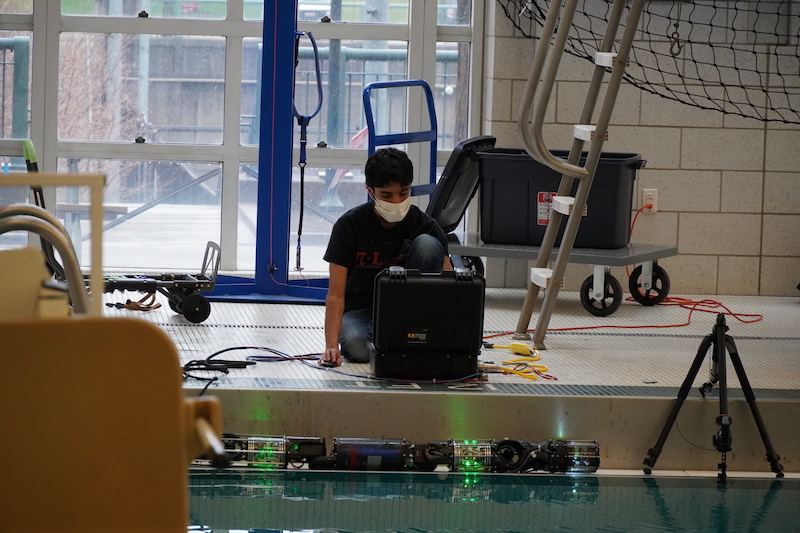 The military has limited options for inspecting areas like a ship’s hull. To inspect a hull, the Navy must either send a team of divers to the ship’s location, wait until it returns to port to deploy the divers, or pull it into a dry dock. All options that take time and money.

A submersible robot snake could allow the Navy to inspect the ship at sea, alerting the crew immediately to critical damage or sending information about issues that need attention back to port for use when the ship docks.

“If they can get that information before the ship comes into a home port or a dry dock, that saves weeks or months of time in a maintenance schedule,” said Fischer, who served in the Navy for three years. “And in turn, that saves money.”

Steve McKee, a co-lead of the Joint Robotics Organization for Building Organic Technologies (JROBOT), said the project is a great example of a partnership between CMU, the ARM Institute, and the Department of Defense that will improve the readiness of equipment in the armed services.

“The advancements being made hold great promise for helping not only the Department of Defense, but also various industries around the world,” McKee said.

Outside the military, the robots could inspect underwater pipes for damage or blockages, assess offshore oil rigs, or check the integrity of a tank while it is filled with liquid. The robot could be used to inspect and maintain any fluid-filled systems, said Nate Shoemaker-Trejo, a mechanical and mechatronics engineer in the Biorobotics Lab working on the submersible robot snake.

“The distinguishing feature is the robot’s form factor and flexibility. The smallest versions of regular submersibles are usually blocky, one-piece arrangements. The robot snake is narrow and jointed,” Shoemaker-Trejo said. “The end result is that an underwater robot snake can squeeze around corners and into small spaces where regular submersibles can’t go.”

Versions of the robot snakes have already proven useful in difficult situations. Travers led a team to Mexico City in 2017 to use robot snakes in search-and-rescue mission after an earthquake. And the robot snake made a lasting impression on Jimmy Fallon when it climbed up his leg as a guest on NBC’s The Tonight Show with Jimmy Fallon.

The robot’s modular design allows it to adapt to different tasks, whether squeezing through tight spaces under rubble, climbing up a tree or slithering around a corner underwater. For the underwater version, the team used existing watertight modules that allow the robot to operate in bad conditions. They then added new modules containing the turbines and thrusters needed to maneuver the robot underwater.

Development progressed rapidly. The team started working on the underwater robot snake in July 2020 and by March 2021, had it swimming in the CMU pool.

“I’m surprised that we made this robot work as fast as we did,” Choset said. “The secret is the modularity and the people working on this technology at CMU.”