Yaskawa has attracted a wide range of customers worldwide since its first all-electric industrial robot in Japan Motoman-L10 was shipped in 1977.

Since its foundation in 1915, Yaskawa has been turning motors for 100 years and improving technology based on motors and their applications.

In 1977, when Motoman, an industrial robot, was first introduced to the market, it developed and commercialized Motoman by taking advantage of its strength in the manufacture of components that require high quality, such as underbody parts and mufflers, in order to respond to the automation and labor-saving of the welding process in automobile factories. 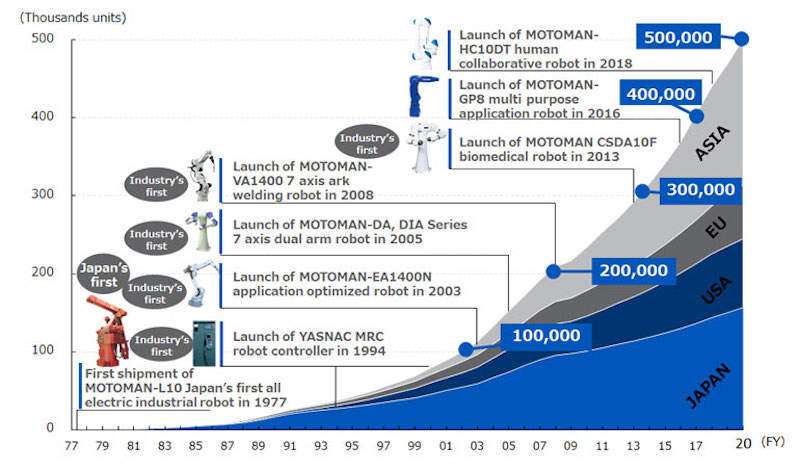 The company has commercialized a number of innovative products equipped with the world’s first technology by taking advantage of not only the design technology of manipulators which are the basis of robots, but also Yaskawa’s own industry-leading servo motors, high-speed and high-precision motion control technology, and application technology for various types of applications.

In 1994, the YASNAC MRC robot controller achieved fully independent cooperation between multiple robots for the first time in the industry.

And in 2003, the company shifted from general-purpose robots that can be used for a variety of applications, such as welding or handling, to “application-optimized robots” which are the first in the robot industry to optimize the use and function of each application, as it thoroughly pursues customer needs.

In addition, it has opened up a new robot market with advanced technologies of the times, such as a 7-axis robot that achieves the same degree of freedom as a human arm by adding one more degree of freedom to a robot with six degrees of freedom that is sufficient for general movements, and a dual-arm robot that can be used to simulate the work performed by a human with both arms.

In recent years, against the backdrop of a declining working-age population and a worsening labor shortage, and the prevention of the spread of infectious diseases, in addition to the automobile industry, demand has been increasing in the general industrial sector for the three products markets (food, pharmaceuticals or cosmetics) and the 3C market (Computers, home appliances and telecommunications equipment).

In order to respond to diversifying manufacturing needs, it launched “Motoman-HC 10 DT,” a human-cooperative robot in 2018 that can work next to factory workers, and have expanded the range of applications of industrial robots.