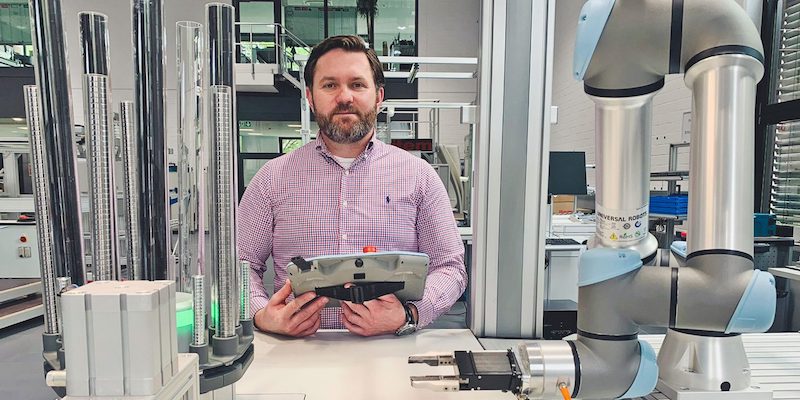 The video below will show you why human-robot collaboration holds enormous benefits for staff in manual assembly and enables companies to efficiently produce very small series in semi-automated processes.

item Industrietechnik developed a system for human-robot collaboration with the aim of lightening the load on workers in manual assembly while also boosting the efficiency of associated processes.

Advantages include the modular construction and the option of semi-automating the assembly of products that could previously only be made by hand. In this case, modularity means the industrial robot arm from Universal Robots is installed on a wheeled functional cell.

This and other cells can be docked onto any item Work Bench System via a special docking station. When not in use, the cells can be removed in seconds and stowed away to save space. What remains is a fully functional manual work bench.

Want to know more? In the following video you can see for yourself how the system works and the benefits human-robot collaboration can offer in manual production.

As the video demonstrates, one of the tasks the robot takes care of at item is the installation of rollers. A member of staff fills the relevant components into special magazines so that the robot can remove them one by one and place them in an assembly device.

After the automated assembly step, the robot removes the finished roller, transfers it to a workpiece carrier, before moving on to assemble the next roller. During the assembly phase, workers can take care of other tasks such as filling more magazines.

This free user report from item Industrietechnik provides further details about the collaborative robot assembly system, its development and the potential and opportunities that a similar system could offer your company.

Would you like to find out more about collaborative robots? In the “Human-robot collaboration – benefits of cobots in industry” entry on the item blog, you can read about how cobots can support your staff, take the strain off them, and even protect them.