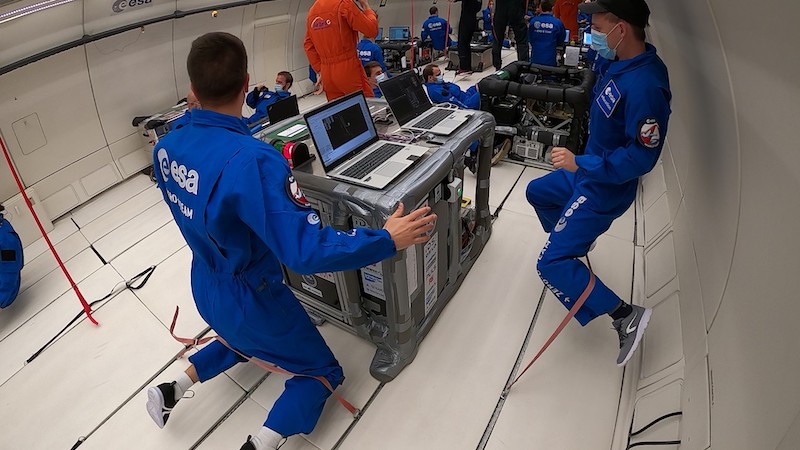 Spacecraft are developed on Earth, tested, fully assembled and transported in one piece by a launch vehicle to their respective places of operation. Each component must be designed to withstand the high loads of the launch phase.

In most cases, in addition to complex test procedures, this leads to an oversized structure of the spacecraft components, because in orbit they experience only a fraction of the stresses they must endure during rocket launch.

The maximum take-off mass required for transport with the launch vehicle and the volume of satellites, for example, thus cause high space transport costs.

At the same time, space in the rocket is restricted, which limits the design of the spacecraft from the outset. The search is on for processes that expand the possibilities of future space missions, save resources and reduce costs. 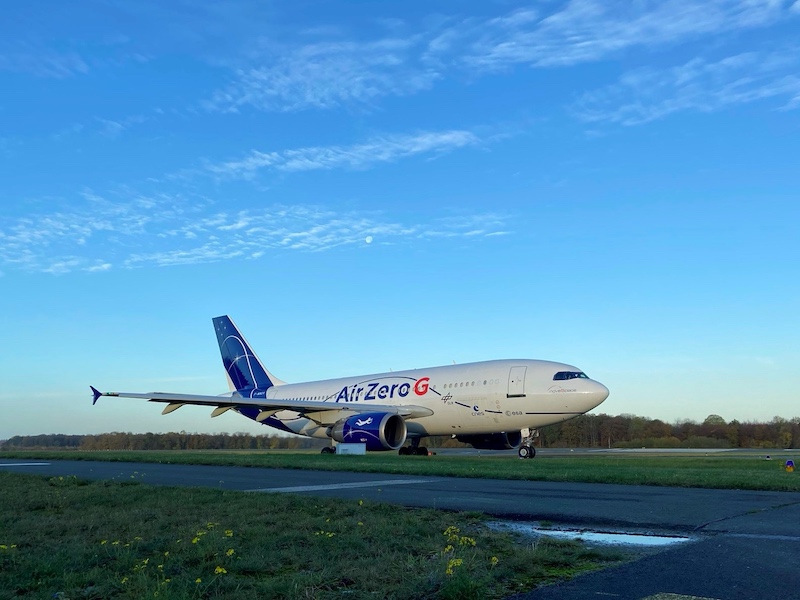 The AIMIS-FYT team at Munich University of Applied Sciences is developing and researching an additive manufacturing process for this purpose, in which the production of structures takes place in zero gravity.

The elements needed for space travel do not have to meet the high launch requirements, but can be tailored precisely to the mission requirements. The process is being researched on parabolic flights in zero gravity – supported by a uEye CP industrial camera from IDS.

For this additive manufacturing process, also called “in-situ manufacturing” (Latin in situ ‘in place’), the team developed a 3D printer with an extruder through which a liquid photopolymer can be dispensed.

Instead of creating the components layer by layer, as is the case with conventional 3D printers, they are created directly by the three-dimensional movement of the print head.

Through the application of UV light, the resin is freely extruded into space in zero gravity and hardens within a short time. In combination with weightlessness, this enables manufacturing without shape restrictions that normally exist due to gravity on Earth.

Typical shape limitations are, for example, long overhangs that are not possible on earth or can only be manufactured with elaborate support structures. In zero gravity, it is even possible to create components without a fixed anchor point, such as a pressure plate.

This production process enables a wide variety of designs, such as printed structures for solar panels or antennas. For example, the production of mirrors for parabolic antennas or the manufacture of truss structures for the mounting of solar generators is conceivable.

This should be of particular interest to manufacturers and distributors of small to micro satellites or even entire satellite constellations, who can use it to reduce both their unit costs and the launch costs for transporting their systems into orbit.

In addition, the reduced mass of the spacecraft assembled in orbit saves resources and can increase the lifetime of a mission by taking more fuel on board instead.

“For satellites, the fuel is usually the limiting factor; at present, it usually lasts for around 15 years,” explains Torben Schaefer. 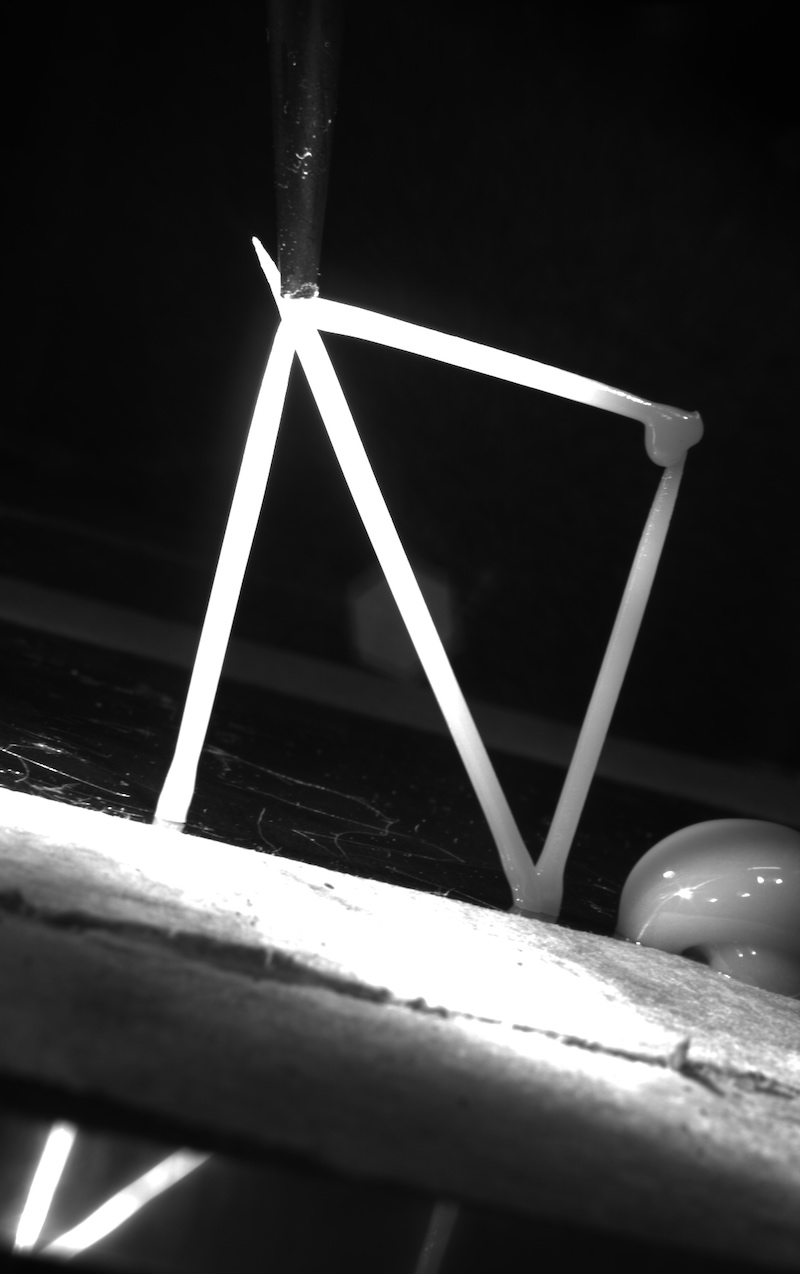 The most important process of the manufacturing process is the printing process itself. This is essentially made up of three main phases:

The printing of straight rods, connections of rods and the creation of free-form rods are tested. In one case, a conventional printing plate is used as the starting point for printing; in another case, the behaviour of printing, free-floating rods is investigated.

“In our printing process, precise, pressure-stable and constant delivery of the medium is important. At the same time, the parameters should be kept constant during the entire process,” explains Torben Schaefer.

The USB 3 camera sponsored by IDS keeps a close eye on the process: It watches the nozzle of the printer in close-up and always moves relative to it.

This way, the camera follows the nozzle with every movement and always has it precisely in focus. The image is cropped in such a way that the formation of the rods is captured around 4.5 cm below the nozzle.

The IDS camera hereby provides very important results for the discharge of the resin and its curing. The UV LEDs required for curing produce a strong overexposure, which means that difficult lighting conditions prevail.

No problem for the U3-3260CP from the IDS portfolio: with the cost-effective 2.30 MPixel Sony sensor IMX249 (1920 x 1200 px), it sets particularly high standards in terms of light sensitivity and dynamic range.

This makes the global shutter CMOS sensor with its 5.86 µm pixels predestined for applications like these, which are supposed to deliver a perfect result even in difficult lighting conditions – in this case, strong brightness due to overexposure.

In order to be able to further analyse the exit behaviour from the nozzle in zero gravity, the process is carried out at a slower speed. The contour of the rod must be precisely captured.

“For this, the high frame rate and resolution of the camera are crucial for a high-quality evaluation,” explains Torben Schaefer from the AIMIS team.

With a frame rate of 47.0 fps, the IDS camera ensures excellent image quality and is extremely low-noise – perfect conditions for its task in space. But the simple integration of the camera also convinced the research team. 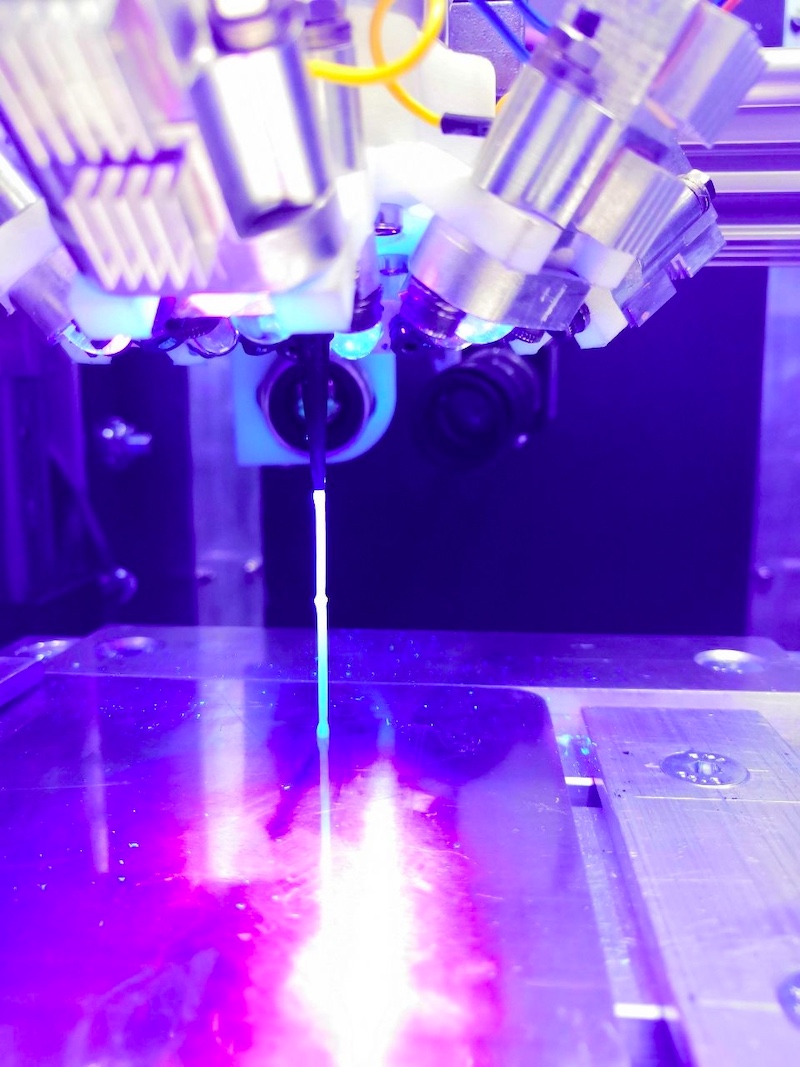 “We were able to seamlessly integrate the camera into our C++-based monitoring system with the help of the IDS SDK,” says Torben Schäfer.

According to him, this is where all the data from the sensors converge and provide a comprehensive overview of the current status of the printer and the individual print parameters.

“We can start and stop the recording of the IDS camera and all other measurements with one click,” says Schäfer.

“Since there are only 20 seconds of zero gravity on a parabolic flight and there is a break of around one and a half minutes between two parabolas, we only save the most important information by starting and stopping measurements and recordings in a targeted manner.”

In addition, a live image of the printing process is displayed on the monitor with the help of the IDS software.

“This live feed makes it easier for us to set up and quickly analyse the printhead.”

The findings from the experiments will be used to further optimise the printing process of the four basic 3D printing operations (straight bar, straight bar with start / stop points, free-form bar as well as connections between bars) and to prove the primary functionality of additive manufacturing in zero gravity.

The aim is to test the technology in space, as it offers the chance to drastically reduce the cost of components in space technology.

“With the AIMIS-FYT project, we have the opportunity to actively shape the future of space travel,” says Michael Kringer, project manager of the AIMIS-FYT team.

The powerful little IDS camera has successfully recommended itself for future missions – on Earth and in space.

AIMIS-FYT: The acronym AIMIS stands for Additive Manufacturing In Space and is the name of a team of four aerospace engineering students at the Munich University of Applied Sciences.

The AIMIS-FYT (Additive Manufacturing in Space – Fly your Thesis) team is taking part in zero-gravity experiments as part of the European Space Agency’s campaign. IDS accompanies the team as part of its university sponsorship programme.