K.Hartwall has launched a new “autonomous mobile robot” called A-Mate. The company says this is the first fully electric free-lift pallet “AGV” with omnidirectional drive on the market.

K.Hartwall calls its new machine an AGV as well as an AMR, which indicates the ongoing merging of the two technologies across the industry.

The company says the A-Mate is an extremely versatile mobile robot that will bring a new level of automation to intra-logistics, and to the movements of different load carriers, from pallets to roll containers and foldable cages or “gitter” boxes.

K.Hartwall  says the free SLAM navigation combined with the innovative fleet management allows its customers to have a full overview of and control over their internal logistics operations.

Furthermore, safety has been a central point of focus in the development of A-Mate as AMRs become an integrated part of the overall logistics process. 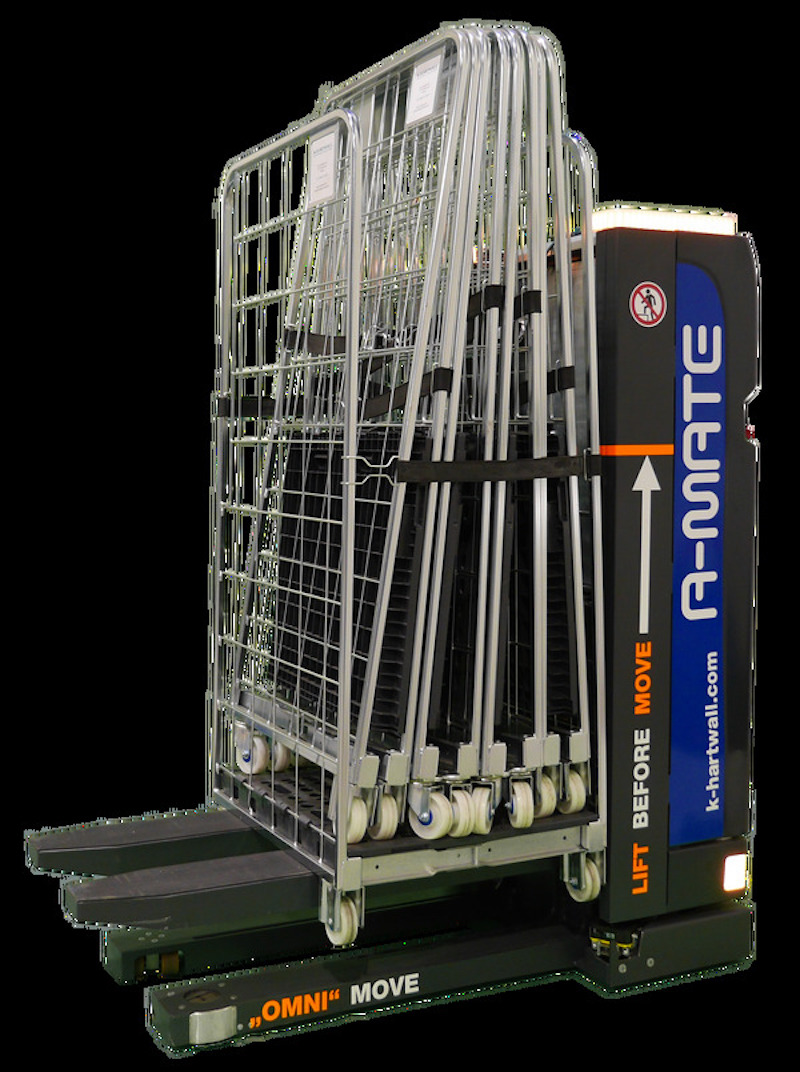 The result is that A-Mate is the only 360° safety pallet AGV on the market—not only when fetching load carriers but also when transporting them.

A-mate offers clear advantages compared to existing AMR products on the market through its increased load capacity of 1000 kg.

One of the key advantages is its ability to lift a load of up to 1 ton to a height of 1 meter without using supportive scissors below the forks.

This allows for very close access when loading or unloading both conveyors and pallet racking. Furthermore, thanks to its slim design, A-Mate can move freely in both narrow aisles and within pallet stacks.

With A-Mate, K. Hartwall reinforces its market leadership in logistics equipment for warehouses and industrial manufacturing.

The combination of traditional load carrier solutions, such as roll containers, Lean adaptor pallets and dollies or foldable cages, with mobile robots demonstrates how the Finnish company is looking to the future of logistics.

Jerker Hartwall, CEO of K.Hartwall, says: “A-Mate is proof of how to combine autonomous mobile robots with traditional load carriers to help our customers achieve both greater efficiency and increased safety.

“With K.Hartwall’s logistics solutions portfolio, you can now automate the movements of your load carriers in a very easy way.”

A-Mate and other AGVs provided by K.Hartwall to its customers offer “a new way to reduce costs and increase efficiency” in their logistics processes by allowing them to decrease their dependence on skilled labor and reduce costly process errors and the risk of accidents.

Today, almost half of all working hours in logistics are spent on manual routine jobs. By 2035, automation will reduce that number to 35 percent.

Key to this evolution is the increasing deployment of AGVs and AMRs, says the company.

K.Hartwall says it wants to be “part of that revolution” and support its customers in the postal, retail, and automotive industries make “the next smart move” in their logistics operations.